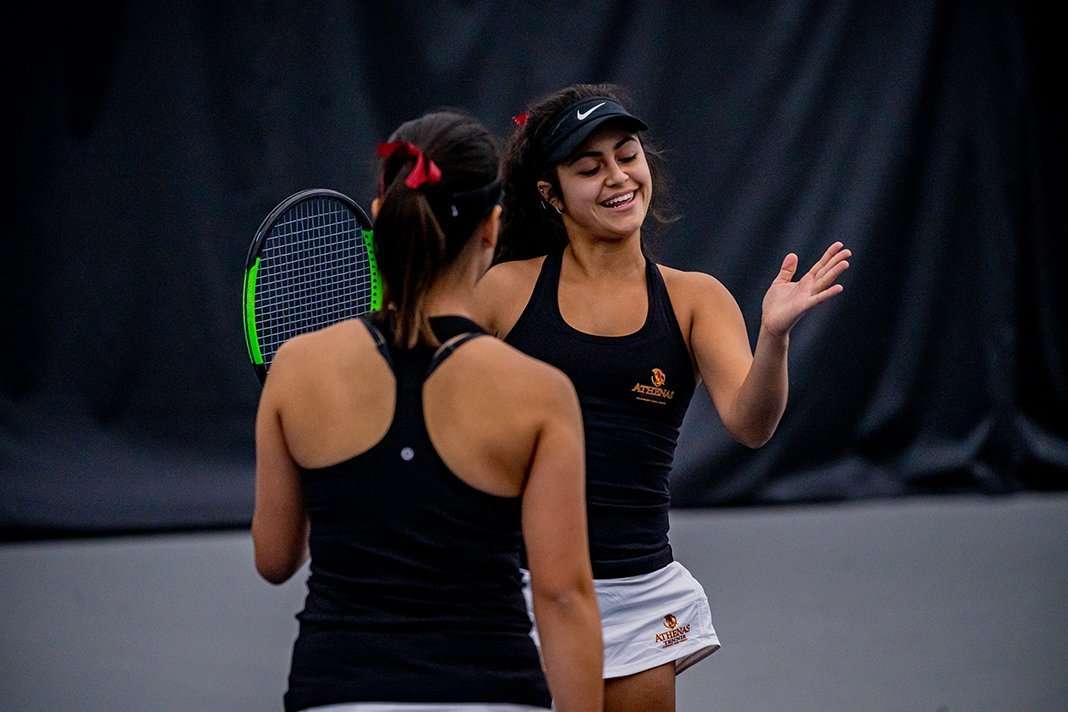 There was a lot of tennis played this weekend – 14 tournaments were played during Week Eight of the ITA Tour: Fall Circuit by UTR. We’ve crunched the numbers and have everything you need to know.

Student-athletes from an incredible 83 different schools competed in week eight of the Circuit. With rules differing from school to school and conference to conference on whether or not student-athletes can play attached, the Fall Circuit offers athletes the opportunity to get in the crucial fall matches that are necessary for their development.

Seven University of Denver men’s tennis student-athletes competed this weekend at the Parker Racquet Club tournament. Senior James Davis walked away with the men’s title, while his teammates also had strong weekends. Three out of the four semifinalists were Pioneers and the finals were an all-Pioneer affair.

Six Penn State student-athletes traveled down to compete at the always competitive Georgia Gwinnett Fall Circuit event. Freshman Sam Bossem shined for the Nittany Lions. Bossem reached the finals of the event before falling in two sets to junior Thomas Paulsell. In addition to Bossem’s success, three Penn State players reached the quarterfinals of the event.

Four University of San Francisco athletes competed at the Morgan Hill Tennis Club event this past weekend. Grad student Paul Giraud, junior Nitzan Ricklis, and junior Mitch Johnson thrived at the tournament – all reaching the semifinals. Giraud won his semifinal match over Mitch Johnson to move onto the finals.

University of the Pacific | 6 student-athletes

The University of the Pacific had a large contingent from the women’s team at the Morgan Hill Tennis Club tournament. Senior Dohee Lee and sophomore Zoe Clydesdale-Eberle had the best showing this weekend – both reached the quarterfinals before being eliminated from the tournament.

The Chapman University Fall Circuit tournament provided competition for six Cal State Fullerton Titans this weekend. Incoming freshman Natalie Duffy made the most of the weekend. After a tough opening round match, Duffy moved methodically through the draw with straight set victories. She met junior Chui Kei Leung in the finals, but did not have enough to secure the victory.

Claremont-Mudd-Scripps also had a large presence at the Chapman University Fall Circuit this past weekend. Athenas junior Sarah Bahsoun had a solid performance this weekend and reached the quarterfinals before being knocked out by finalist Natalie Duffy. Bahsoun won her opening match against Cal State Fullerton’s Taylor Valenzuela in straight sets.

Collegiate Players Made Up 32% of All Players

While the ITA Tour: Fall Circuit by UTR tournaments are open to all players, collegiate players made up a significant portion of the registered players. The events continue to draw college players who have limited opportunities to compete during the fall.

James Davis from the University of Denver finished week eight of the ITA Tour: Fall Circuit by UTR as the highest rated men’s player. Davis competed at the Parker Racquet Club event where he won the men’s title. En route to the title, he faced teammates Charlie Miller and Mattia Ros and Jack Mcdermott of Metropolitan State College of Denver. Davis reached the finals without dropping a set; however, when faced with teammate Ros, he was forced to go to a third-set tiebreaker.

Blue-chip recruit Emma Staker claimed the top UTR this weekend with a 10.50. Staker, a familiar face at ITA Falk Circuit events, reached the semifinals at the Wichita State tournament this weekend. Staker fell in the semifinals to eventual tournament champion Isabel Gallego of the University of Nebraska. Staker played a near flawless tournament up to the semifinals only dropping five games.

Catch up on the rest of the results from Week Eight of the Fall Circuit!