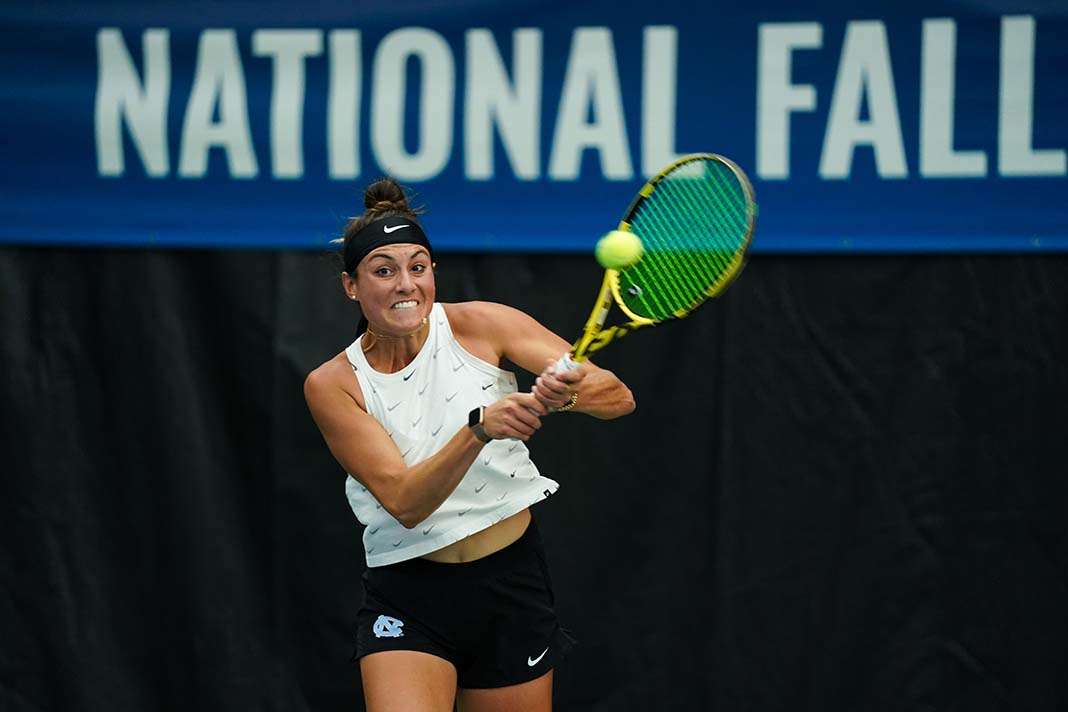 The No. 3-seeded Graham (pictured above), a fifth-year UNC senior, defeated UCLA’s Abigail Forbes, 6-4, 6-2, in the title match, after eliminating top seed and ITA No. 1 Ashley Lahey of Pepperdine in the semis. Hilderbrand (pictured below) defeated UCF teammate Gabriel Decamps, 4-6, 6-1, 6-1, to lift the trophy as the No. 8 seed.

These open fall championships piloted a new level-based competitive pathway for American players, with the addition of juniors—via four USTA wild cards each in the 32-player men’s and women’s draws—and $20,000 in prize money to the 2020 event.

It boils down to one framing question, according to ITA CEO Dr. Timothy Russell: “What is the most efficient and effective way to get American tennis players better?”

This blended format, in one way or another, has been discussed for over a decade. But the financial challenges presented by COVID-19 pandemic have brought it to the fore as a cost-effective way to offer level-based competition.

“COVID has pressed us all to look at our pathways: the competitive models in junior tennis, college tennis and entry-level pro,” said Cass.

“It’s been a good confluence of using a challenging time as an opportunity,” added Russell.

Typically, college players compete within their own division throughout the academic year, with some exceptions for lower-level ITF tournaments. But that siloed approach is a missed opportunity for more localized play at the intersection of the models Cass listed. An integrated format was also used at the Oracle ITA Masters presented by UTR, held in San Diego in October. USC’s Erin Cayetano and former USC star Brandon Holt, both California residents, won the singles titles there.

“There’s a real movement that play should be more regionalized,” Cass said, to cut down on travel time and expenses.

This localized integration has been on display at the ITA Summer Circuit, a longstanding outlet for student-athletes to compete during the collegiate offseason. With COVID-19 halting team competition this fall, the ITA continued that circuit into the autumn months. After a successful run of 28 tournaments over the summer, demand for the ITA Fall Circuit has completed 160 tournaments over 10 weeks.

Members of the Wisconsin women’s team—playing individually, or “unattached”—have been active on the fall circuit, where college players have accounted for 32% of all entrants, the rest largely comprised of juniors.

With team competitions halted, McKenna and her players are thankful for the chance to compete. “It’s very inspiring as a coach to see your team be so grateful every single day,” she shared. The Badgers, who have gotten accustomed to practicing with masks on when weather forces them indoors, are still waiting on official word from the Big 10 regarding the traditional spring team season.

To offer another avenue for competition this month, the USTA and ITA had partnered to set up the ITA/USTA National Campus Open, which was slated to begin on Nov. 9, again bringing together collegians and juniors, as well as young professional players. But that prize-money event, which would have created a two-week doubleheader at the Campus, was cancelled due to Tropical Storm Eta. The brand-new tournament was designed as a further test of the integrated model, while also allowing players to make the most of their travels to the Campus for Fall Nationals, similar to the Cincinnati-US Open double this summer in New York.