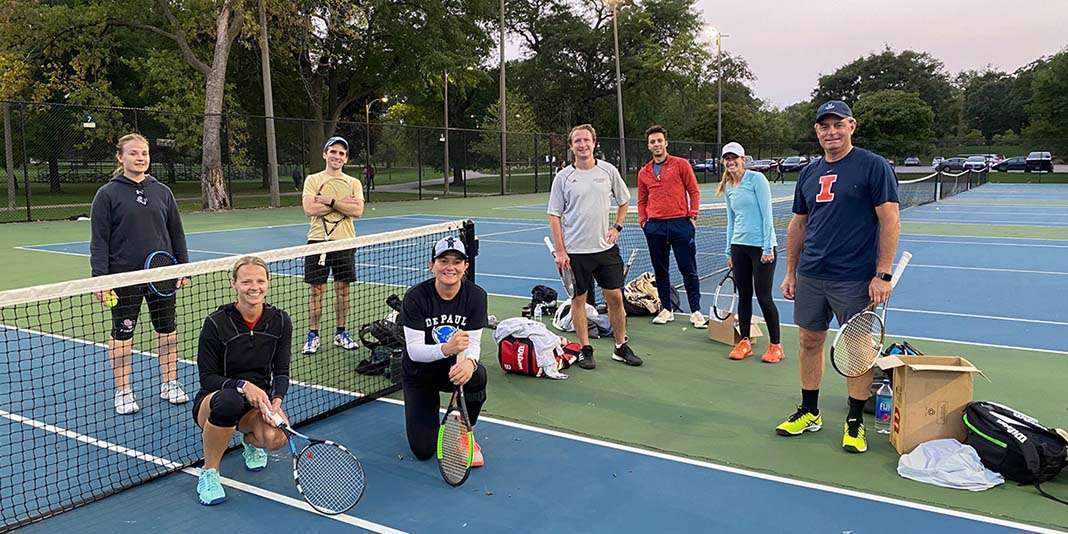 As a junior player and former collegiate athlete at the University of Illinois, Brian Dillman cannot remember a time when tennis was not present in his life. Now as an adult, Dillman has discovered a reinvigorated passion for the game and has been volunteering his time with the USTA Chicago District Tennis Association (CDTA).

One of the main problems Dillman and the CDTA have faced since the onset of the COVID-19 pandemic is how to reintroduce players to the game in a safe and fun manner, especially former college players.

“You have tens of thousands of dormant players who know how to play, who put a lot of time and effort into learning how to play, who played college tennis at every level,” said Dillman. “So, why not with COVID and social distancing and with people not traveling so much, why not get people reinvigorated in tennis?”

Through the strong partnership between Dillman and the staff of the CDTA, a new college alumni league was created.

Jill Siegel, Executive Director of the CDTA, took charge of forming the league, creating rules and starting the process of recruiting players. After all was said and done, the league grew to just over 20 former college players from schools across the country, such as Northwestern, Yale and Iowa.

The league consisted of four teams that competed against each other each week for six weeks in two singles matches and one doubles match. Matches each week were held at Riis Park in the City of Chicago.

For Dillman and the rest of the players, the enthusiasm was through the roof at each match. Dillman says that it was exciting to see such a high caliber of play and competition.

“I think one of the struggles for former collegiate players is finding talent and good competitors, so we’ve kind of put them all together,” said Dillman.

From the perspective of Siegel and her staff at the CDTA, the league has served as a crucial way to get new players involved in not only the game, but the USTA as well. Additionally, this league has inspired the District to branch out and offer even more types of social leagues.

“Starting this league took a leap of faith because we weren’t sure what the interest would be or how to pick a site that would be convenient for as many people as possible,” said Siegel. “What we learned is that there is no harm in starting small and seeing where things go.

“In these COVID times, we have been inundated by new players looking to join teams – more than we can find teams for; so, these social leagues provide a great way to help newcomers start playing.”

The league has one week left before a winning team is crowned, earning the $500 prize money.

Though the league has almost wrapped up for this year, Siegel and her team are already hopeful for future leagues and expanding the offerings, such as offering mid to lower-level leagues and creating leagues in all parts of the District to compete against each other.