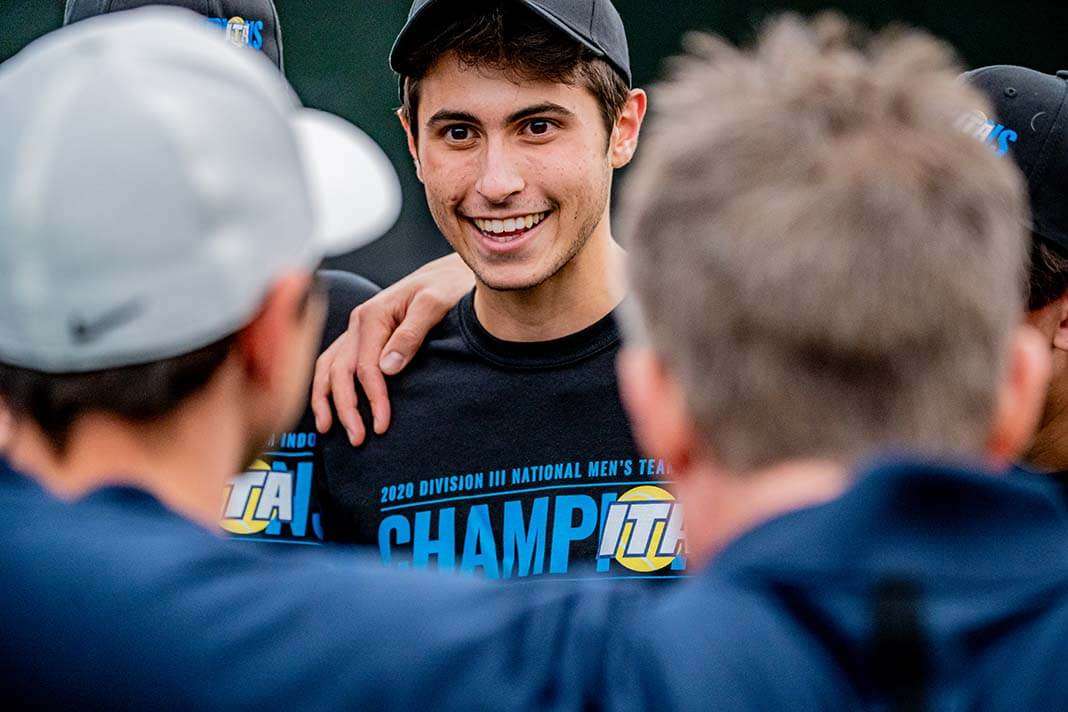 The world-famous New York University also has an accomplished tennis team. NYU’s most successful player was arguably Demetrios Leontis from 2001 to 2003. He won 94.5% of his singles matches and 3/4th of his doubles matches played. Under the guidance of Horace Choy, who is in his 14th year as the NYU Head Coach, the Bobcats have been a yearly contender in regional and national rankings. Choy also produced four All-Americans so far in New York.

Follow NYU to see where your UTR stacks up!

The Rochester Yellowjackets have been a force to reckon within the Northeast and in the nation. Current Head Coach, Matt Nielsen, is entering his 17th year with the program. Under Nielsen’s guidance, the team achieved their highest regional and national ranking, as well as five All-UAA selections. Academically, the team has been selected 10 times as a ITA All-Academic team. Nielsen and his team received the Collegiate Award by the USTA for their outstanding contributions to the community and campus.

Follow Rochester to see where your UTR stacks up!

The Brandeis Judges are one of the top academic and athletic schools in all of Division III. In 1989, the Judges won the UAA for the first time and the team made history and played at NCAA Championship for the first time. Throughout the years, Brandeis had 7 ITA All-Americans that were collected by 3 players. Noel Ocomy won the national singles and doubles title during his tenure in Waltham.

Follow Brandeis to see where your UTR stacks up!

The Carniege Mellon Tartans are consistently ranked within the nation’s top teams in the ITA team rankings. Since 2000, the program has produced 35 ITA All-Americans, while appearing in the NCAA and ITA Indoor tournaments. In 2016, the team was ranked as high as No. 7 in the country — the best in program history. Individually, the team has had great success, winning two USTA/ITA singles championship titles.

Follow Carnegie Mellon to see where your UTR stacks up!

The WashU Bears are one of the most recognized universities in terms of academics, but their athletic teams shine on the court as well. The 2008 national champions have been consistently ranked within the Top-15 of the ITA DIII Team rankings. John Watts, WashU’s most decorated player in program history, won the NCAA individual title in 2010, and the ITA championships in 2007 and 2009. The Bears won the UAA championships three times and competed the NCAA tournament for the past 20 years.

Follow WashU to see where your UTR stacks up!

During the past decade, the Case Western Reserve Spartans have piled up victories over their opponents. In 2017, the Spartans tied their school-record for wins in a single season from 2013, winning 22 matches. CJ Krimbill, one of CWRU’s most decorated players reached the NCAA Final Four in doubles three times, advancing once to lift the championship trophy. Head Coach Todd Wojtkowski is in his 12th season, having produced 12 All-Americans while winning 206 matches with the men’s team.

Follow Case Western to see where your UTR stacks up!

The Emory Eagles are a dominant squad within Division III tennis and have had quite the success in the past. The Eagles have won the NCAA national championship title five times since 2003. In UAA play, the team has rolled up impressive numbers, collecting 27 conference titles. The program has produced some of the finest athletes, having 39 ITA All-Americans wear the blue and gold. In the most recent rankings during the Covid-19 season, the team was the top-ranked program in Division III. Lastly in February of 2020, the Eagles secured their number one spot in the rankings by winning the ITA National Team Indoor Championships.

Follow Emory to see where your UTR stacks up!

The University of Chicago Phoenix have had a successful past decade within their athletic department — especially on the tennis court. The Maroon has had 14 ITA All-American players that collected a total of 33 honors. Of those honorees, multiple won the ITA regional championships, as well as reached the final-four of the NCAA individual tournament. In 2018, UofC made history, winning the UAA championship while player Jeremy Yuan was named the MVP of the tournament.

Follow Chicago to see where your UTR stacks up!

Interested in learning more about the teams in the UAA? Check out our Division III Men Teams page to connect with them on social media and learn more!