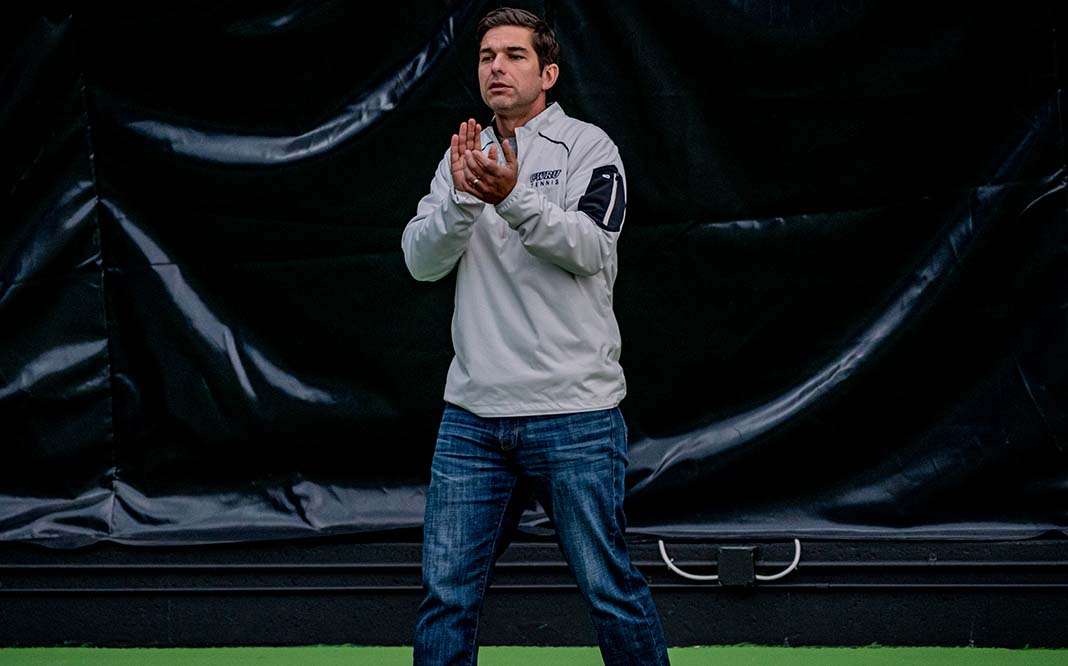 As a collegiate coach, Todd Wojtkowski has had the pleasure of witnessing high-caliber tennis over the years and helps guide young players to their full potential. Wojtkowski has been coaching for Case Western Reserve University (CWRU) for the past 12 years and now serves as the Head Men’s Coach and an Associate Professor in Physical Education.

During his tenure, Wojtkowski led his players to two individual national championships as well as finishing in the top 10 nationally for three of the past five years.

Wojtkowski says that the thrill of coaching at a collegiate level does not stop at the wins for him. It is a chance for him to connect on a deeper level with his players.

“I am trying to build specific habits of hard work, resiliency and commitment through our daily practices through which they can become incredibly successful leaders upon graduation,” said Wojtkowski. “The rewards are accomplished in our practices and come to fruition many years later.”

But where some coaches might stop when their days end at the college courts, Wojtkowski switches gears to become an important member of the Cleveland tennis community.

In addition to his duties as head coach at CWRU, Wojtkowski also serves as the Director of High Performance for the Cleveland Racquet Club. In this role, Wojtkowski has the unique opportunity to oversee the growth of junior players.

“We have high performance clinics at the Cleveland Racquet Club that have become very successful in training many state champions, and we have seen over 25 high school students matriculate to some of the best tennis programs in collegiate tennis over the past few years,” said Wojtkowski. “There are some incredible teaching pros at the club that have truly developed a lot of incredible players through the years.”

Wojtkowski also serves on the board of directors for Advantage Cleveland (AdCle), a chapter of the National Junior and Tennis Learning (NJTL) network. This is one of the favorite hats he gets to wear on a daily basis.

“I have a lot of connections from recreational tennis, to high school tennis, to collegiate tennis and professional tennis,” said Wojtkowski. “My job is to bridge all of these connections in order to help build a support system for helping AdCle be able to thrive.”

Advantage Cleveland’s mission is to provide both tennis and learning opportunities for kids in urban areas in an effort to enhance students’ experiences year-round.

As a board member, Wojtkowski is responsible for aiding in the efforts of the NJTL, especially in fundraising. With his ties to the Cleveland Racquet Club, Wojtkowski is in a unique spot to help the NJTL through events hosted at the club.

“The club has been incredibly supportive to Advantage Cleveland through the events they have held in which many of the AdCle family have been able to come and showcase all of their incredible talents both on and off the court,” said Wojtkowski. “We raise the largest amount of money through the pro-am event at the club and the membership looks forward to this amazing event every year.”

The racquet club also hosts an ATP event, in which half of the proceeds from the ticket sales have benefitted AdCle.

One of Wojtkowski’s favorite events, though, is the annual play day for the Special Olympics. As the hosts of the ITA Division III National Indoors, CWRU opens its courts for an incredible day of tennis and fun for Special Olympics players as well as AdCle students.