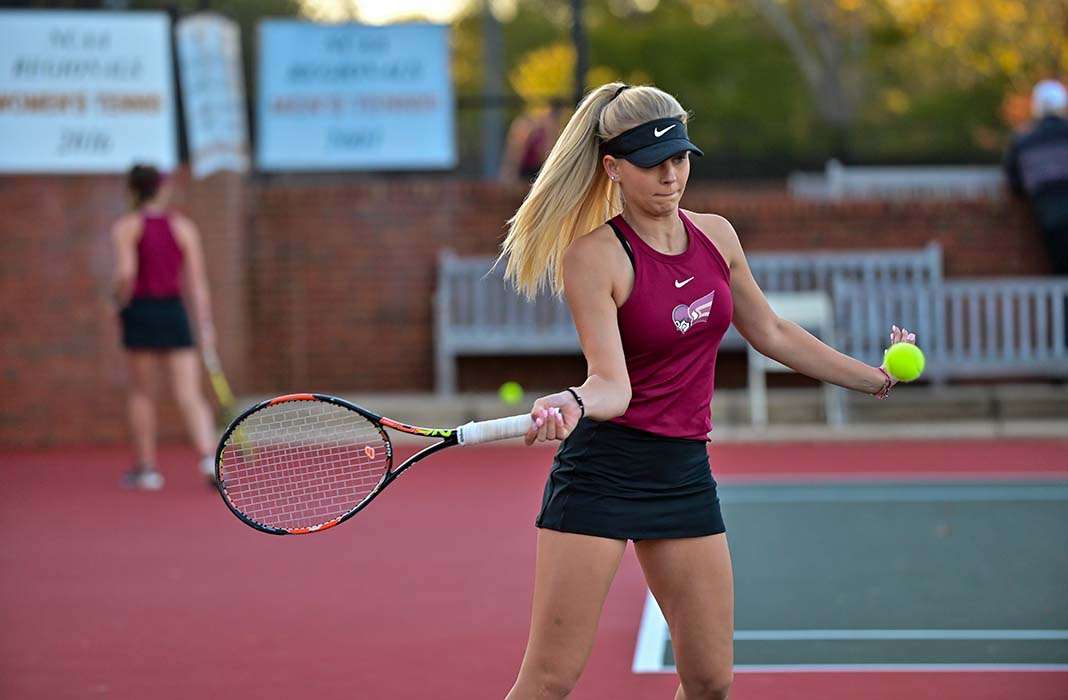 The King Tornado are led by first year Head Coach Rodger Acklin. Acklin spent the past three season at rival Lees-McRae and is a retired Airforce officer. The Tornado was led last season by senior Isla Bell, who was named to the All-Conference team and received an academic all-conference team award. King will be led this year by junior Lauren Smorgonsky, senior Marilyn Roustand and senior Morgan Buchanan. Buchanan was also recognized last season with an academic all-conference award.

Follow King to see where your UTR stacks up!

The Lees-McRae College Bobcats return 5 out of 8 players from last year’s team that went 6-7 in the pandemic shortened season. Their biggest loss was Jaden Acklin who was named to Conference Carolinas women’s tennis All-Conference team last season. Sandy Allen is the top returner for the Bobcats – she played mostly No. 1 singles going 2-10 overall in singles and 4-9 in doubles. Allen’s doubles partner junior Nursharneem Shamsuddin is another player to watch. She played No. 2 singles, going 4-7 overall in singles and 4-8 in doubles. The Bobcats are led by first year Head Coach Gene Highfield, who was a 10 year member of the U.S. Virgin Islands Davis Cup team.

Follow Lees-McRae to see where your UTR stacks up!

The Southern Wesleyan Warriors went 2-5 during the 2019-20 season with their best win coming at Johnson C. Smith. Four Warriors were named to the Conference Carolina Presidential Honor Roll including Noemi Aguirre, Ashley Dube, Iva Jankovic
and Paulina Jankun. Senior Aguirre is the top returning player for Southern Wesleyan, she went 2-5 last season in singles. Head Coach Nathan Thompson is in his fourth season with the Warriors. Thompson was a standout for Clemson from 2001-2005 and went on to play professionally for five years where he won 7 ITF Futures singles titles and 8 ITF Futures doubles titles. He also was a travel coach with Francis Tiafoe.

Follow Southern Wesleyan to see where your UTR stacks up!

The North Greenville Warriors went 1-4 last season with then freshman Larissa Berger playing No. 1 singles and playing No. 1 doubles with her sister Nikita, who has since graduated. The younger Berger’s biggest win last season came against USC Upstate where she battled to win 6-1, 1-6, 10-8. Senior Jhovana Brena will likely slide up to the No. 2 spot this year where Nikita Berger played last season with Freshman Mitzy Enderink and Natalie Schnackenberg competing for the No. 3 and 4 spots. The Warriors are led by Head Coach Mark Smith.

Follow North Greenville to see where your UTR stacks up!

The Converse Valkyries are coached by first year coach Alex Poda. Before coming to the Valkyries, Poda was the head coach at USC Sumter. Junior Maria Belen Vendrell won the consolation final of the ITA Southeast Regional consolation final over teammate junior Valentina Aparicio. Last season, the Valkyries went 5-5 including wins over conference rival Lees-McRae and Johnson C. Smith. Converse graduated their top two players from last season Steffi Kong and Snigdha Musugunthan. Kong won the 2019-20 Murphy Osborne Scholar-Athlete Award. The award goes to an outstanding senior student-athlete and it is the highest academic award presented by Conference Carolinas. She was the first Valkyrie to win the award. The team added talented freshman Anna Klasson from Sweden this year to help lead Converse along with Vendrell.

Follow Converse to see where your UTR stacks up!

The Barton Bulldogs have players from eight different countries currently on their roster. Barton went 7-3 in the COVID shortened season including ending on a four-match winning streak. Senior Marissa Stevenson and junior Eimear Maher went 7-1 playing No. 1 doubles and each went 7-2 in singles. Stevenson was named to the 2020 Carolinas All-Conference team. Another key to their success last season was junior Isabella Caballero who went 8-2 at No. 3 singles. The Bulldogs Head Coach is Lee Underwood, who is No. 23 for the most active wins in women’s NCAA Division II according to the ITA. Since 1991 Underwood has a coaching record of 636-447.

Follow Barton to see where your UTR stacks up!

The Emmanuel Saints earned a 2019-20 ITA All-Academic Team award while seven individuals were named ITA All-Academic Scholar-Athletes. The Saints went 2-8 in last year’s shortened season including a hard fought win against Augusta University. Kethan Darbar is in his fifth seasons with Emmanuel. Before arriving at Emmanuel he spent four years at conference rival King. The Saints return their top player senior Maria Raich who went 2-6 at the tough position of No. 1 singles last season.

Follow Emmanuel to see where your UTR stacks up!

The Chowan Hawks went 3-5 in a COVID shortened season last year. The Hawks’ biggest win came over conference foe Belmont Abbey. Then sophomore Arina Karbolina pulled out the win for the team at No. 2 singles in a marathon three setter. Karbolina would clinch another 4-3 victory for her team less then a month later – this time in Hilton Head against Salem. The Hawks had a successful recruiting year last year picking up two players from Argentina, Valentina Domenicone and Olivia Scattini, both class of 2024. Chowan Head Men’s and Women’s Tennis coach Coach Adam Moneypenny is in his ninth season with the program, and third as the Head Coach.

Follow Chowan to see where your UTR stacks up!

The Belmont Abbey Crusaders’ future is bright. Their top six players according to UTR are either freshman or sophomores and only graduated one player. One of those bright stars is Kayla Vaughan, who was named the ITA Southeast Region Rookie of the Year last year. Vaughan played No. 1 singles where she finished with a 3-2 singles record before the season was cancelled early including a win over conference rivals Chowan. Head Coach Michael Salomon is in his sixth year as the Men’s and Women’s Tennis Coach of the Crusaders where he has been able to improve both the men’s and women’s team. Before coming to Belmont Abbey, Coach Salomon was an assistant coach and a player for Mount Saint Mary’s University in Emmitsburg, Maryland.

Follow Belmont Abbey to see where your UTR stacks up!

The Erskine Flying Fleet are led by Head Coach Calhoun Parr who is in his 21st season. His overall career record at Erskine is 310-146, and his career record in Conference Carolinas play is an amazing 197-43. He has won ten co nference titles and 11 conference tournament titles in the last 15 years. The Flying Fleet had three players named ITA Scholar-Athletes, Grace Coleman (FR-Bentonville, AR), Faith Wright (SO- Columbia, MO), and Eileen Rickert (JR-Charleston, SC). Erskine was able to bolster their line up by bringing in three freshman, Emma Bentz, Marie Guillaume, and Czarina Aguirre, all of which have UTRs around 8. They will definitely be the team to watch in Conference Carolinas with their line-up and accomplished coach.

Follow Erskine to see where your UTR stacks up!

The Mount Olive Trojans went 6-2 last year, but graduated their top player Lina Maria Alarcon. The Trojans will rely more heavily on sophomore Liza Voloshyna who played No. 2 singles last year. Voloshyna was named the Conference Carolinas Player of the Week for the week of February 26th, right after their last match against N.C. Wesleyan. Junior Ece Yuksel will likely play the No. 2 spot, she was a key part of the Trojans team last year playing No. 3 singles. Kevin Coghill has been the head coach at Mount Olive since 2010. Before being named the head coach, Coghill played four years for Mount Olive and was an assistant coach before leaving to become the Head Coach at Charles B. Aycock High School in Goldsboro, N.C.. After two years at Aycock High School he came back to take over the Trojan program from his retiring mentor Dr. Burt Lewis.

Follow Mount Olive to see where your UTR stacks up!

Interested in learning more about the teams in the Conference Carolinas? Check out our Division II Women Teams page to connect with them on social media and learn more!