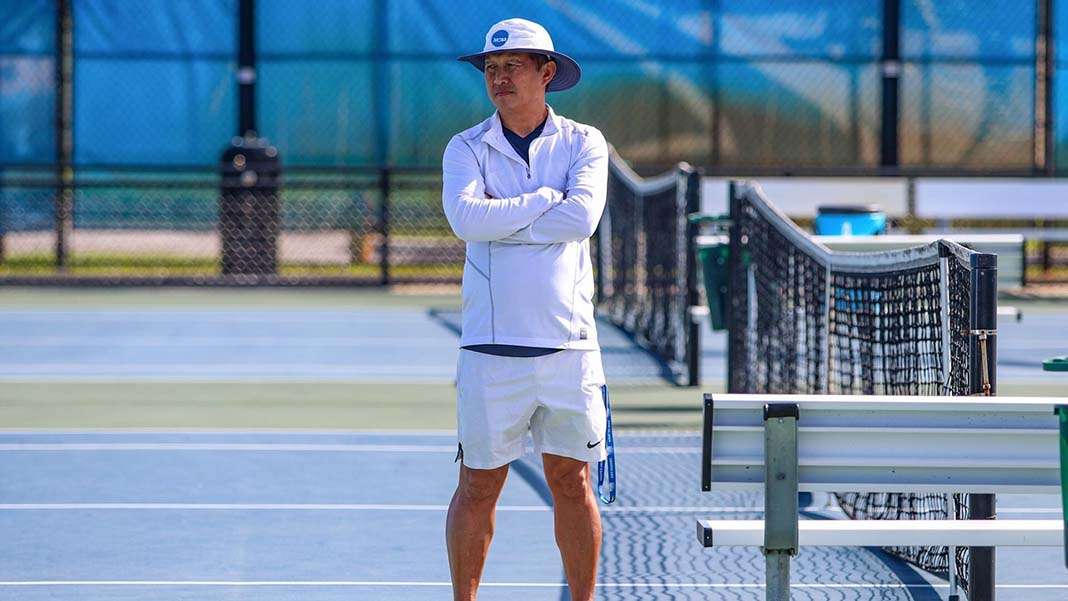 This fall Palm Beach Atlantic Head Coach Chi Ly added another title to his name — ITA Tour: Fall Circuit by UTR tournament host. Over the past couple of months, Ly hosted three Fall Circuit tournaments in West Palm Beach, Florida. He joined over 30 other hosts to offer over 150 tournaments across the nation to collegiate, professional, and junior players during a time when normal play opportunities were limited.

We talked with Ly about his motivation behind hosting Fall Circuit tournaments, his experience, and what he is looking forward to with the upcoming season. Ly will be hosting a Winter Circuit tournament during Week Two in West Palm Beach. Registration is still open for the tournament.

ITA | You hosted three ITA Tour: Fall Circuit by UTR tournaments and will be hosting a tournament for the Winter Circuit as well. What drove you to be a host site so many times?

Since our conference decided not to have a fall non-championship season, I want to provide opportunities for our players and all other college players in the area to play some matches along with local juniors and former pros. Very unexpectedly, we had the best turnout at our Summer Circuit event in July with over 120 players registered for the event, so that drove me into hosting the Fall & Winter Circuit.

ITA | Do you have numbers on how many student-athletes passed through your facility for the tournaments?

Counting Summer Circuit and three Fall Circuit events, we had almost 300 players pass through our facility. Most players are local, but we had some special players play this year: Victoria McEnroe (Patrick’s daughter), Savanna and Sophia Webster (twin daughters of Stella Sampras-Webster). We almost had a match-up of McEnroe and Sampras families. It was nice to have Patrick at one of our weekend events. We also had a former WTA player sign up for our event. Her name is Lisa Bonder-Kerkorian. I believe she was top 10 in her prime time, but it was very challenging for her to play against players much younger. However, she has signed up for the upcoming Winter Circuit.

ITA | Did you feel there was a desire from players in Florida to get back on the courts?

Definitely! The players were very excited to return to courts and the evidence showed in a great turnout at our Summer Circuit this year.

ITA | Out of the three tournaments you’ve hosted, what was one of the more memorable matches?

One of the memorable matches is the men’s top flight singles final of November 14-15. The event was postponed and rescheduled because of Tropical Storm Eta. Both players in the final were my players, so it was nice to see them play against each other outside of practice. No. 3 seed Santamaria upset No. 1 seed Hoffmann 6-0, 6-4.

ITA | What do you wish more people knew about the Fall and Winter Circuit tournaments?

They were verified UTR events and they are very competitive. I wish more college coaches would send their players to the events.

ITA | You ran spectacular tournaments over the past couple of months. What did you do to ensure the best competitive experience for all participants?

We have adjusted our events to group players into draws of 16 or compass draws of 8 so that players will get at least three matches for the weekend. They want to play more matches, so that what we offered to them.

ITA | What overarching health and safety precautions did you implement at your tournament?

We specifically used four balls per match (2 balls for each player to use when they serve their service game). We took the temperature of players when they first checked in. Also we reminded players to practice social distance both on and off the courts. The events were limited to only two spectators per player, but that was very difficult to control.

ITA | It’s such an unprecedented time, did these tournaments offer a sense of normalcy?

Yes, it provided great opportunities for players to get back on the courts and getting excited about playing again since COVID-19 started.

ITA | How did the Fall Circuit benefit your men’s and women’s tennis teams?

Since we didn’t get to compete as a team this fall, these events provided our players the opportunities to play matches and compete again since March. However, it was challenging to motivate our players to sign up because it was not mandatory since NCAA has allowed players to opt out due to COVID-19.

ITA | With the spring season around the corner, what do you expect from your teams?

We are very excited and looking forward to our upcoming season in Spring. However, it is still unsure in the mind of our players since our administration has not confirmed their final decision yet.

ITA | What are the emotions you’re seeing from your student-athletes as they look toward the season?

Most of them are excited about competing as a team again, but still nervous about virus and the possibility of not being to play/compete again in our championship season. Many were disappointed for not being able to play in ITA Regional Championship this fall.