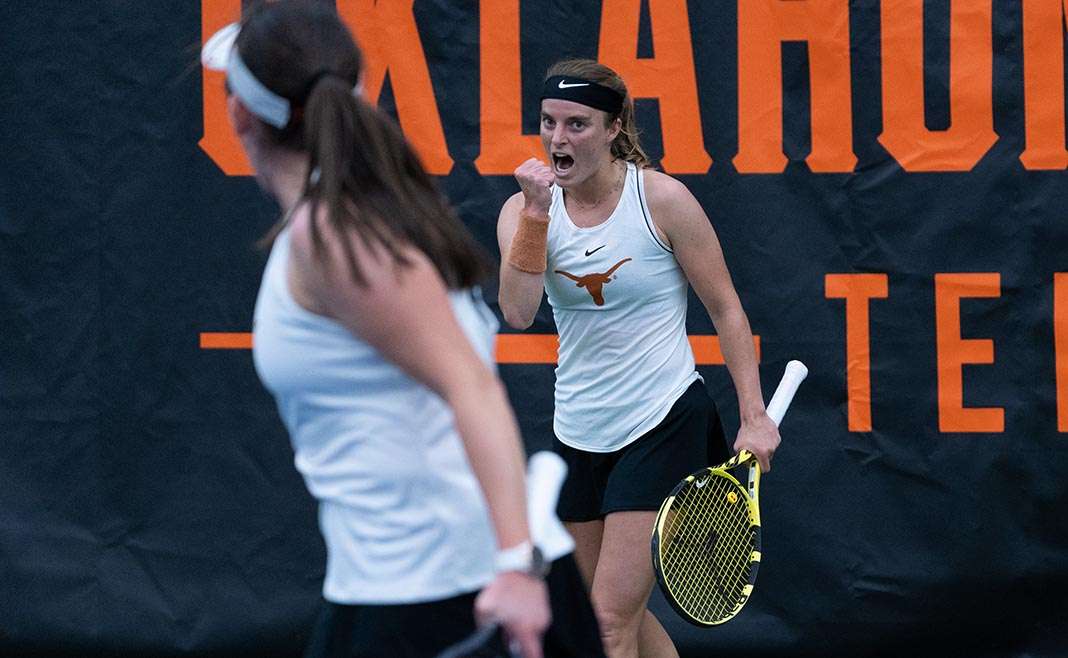 All four seeds at the ITA Division I National Women’s Team Indoor Championship moved onto the semifinals after the first day of play in Stillwater. The semifinals will see defending champion North Carolina face Pepperdine at noon CST and UCLA take on Texas at 6:30 PM CST.

Ohio State and Georgia Tech will meet at 9:00 AM CST, while Oklahoma State and Northwestern will play at 3:30 PM CST. All matches will have live streaming and scoring.

The Tar Heels start off Indoors perfect. Despite standout Alexa Graham being pulled from the doubles lineup before the match, the Heels did not let No. 9 Ohio State get on the board. A bright spot for the Buckeyes — Boulais and Allen took advantage of the altered lineup and took their match 6-3. Graham was back at No. 1 singles and faced UTR ITA Player of the Week Cantos Siemers. On court two, Daavettila powered through her match with Ohio State’s Allen. Daavettila put the Heels ahead by two. Shortly after, Graham and Scotty followed to seal the match for North Carolina. At the time the match finished, Fiona Crawley was one game away from defeating Luna Dormet, while UNC’s Jones and Morra were battling in their third sets. The Heels will compete in the semifinals tomorrow at noon against Pepperdine.

It was a fight to the end for the Waves and Yellowjackets. In doubles, the two teams were neck and neck. Pepperdine went up first and then Tech’s Jones and Flores answered with a win on court one. On court two serving to stay alive, Pepperdine’s Olsen and Redelijk fought off four match points to force a tiebreaker to decide the doubles point. Georgia Tech jumped out in front, but Olsen and Redelijk hung tough and closed the gap. Ultimately, Tech clinched the doubles point as Pepperdine’s return went long. The Waves singles lineup bumped up a spot due to No. 1 Ashley Lahey being out for the match. The Pepperdine players responded well. Failla faced Kenya Jones at No. 1 singles — she handled her in straight sets to pull the Waves even. Georgia Tech’s Cohen raced through three sets to win over Pachkaleva to put her team on top. Cohen would be the last Tech player to score. Ryngler and Zaar finished next and the match shifted to freshman Redelijk. The Wave had numerous match points, but Garcia Gross hung tough and took two games before Redelijk closed it out. The Waves will meet up with defending champions UNC tomorrow in the semifinals.

Due to Covid-19 protocols, the Cowgirls played the match with only four players. The Bruins secured the doubles point with a 6-0 win on court two by Abbey Forbes and Abi Altick. Heading into singles the Bruins were leading 3-0. Annette Goulak sealed the win for UCLA with a 6-2, 6-0 match against walk-on Lora Boggs. At the time the match was clinched, the Cowgirls were up on courts one and three. OSU’s Thamchaiwat took her first set over Bolton. The Bruins will face Texas tomorrow at 6:30 PM CST.

The Longhorns withstood the Wildcats in the last match of opening day. In doubles, Texas came out on top bolstered by their standout freshmen Sun and Collins and veterans Turati and Labrana. Turati did not have the same success in singles. She fell in straight sets to Clarissa Hand on court two. The Horns’ new talent continued to prove their worth in singles. All three singles wins came from freshman — Chavatipon, Sun, and Stearns. At the end of the match it was a race to the finish between Stearns and Rapolu. On court five, Rapolu had match point, but was not able to seal the deal before her teammate Stearns won her second-set tiebreak and clinched the match. The Horns will face No. 2 seed UCLA in the semifinals tomorrow at 6:30 PM CST.