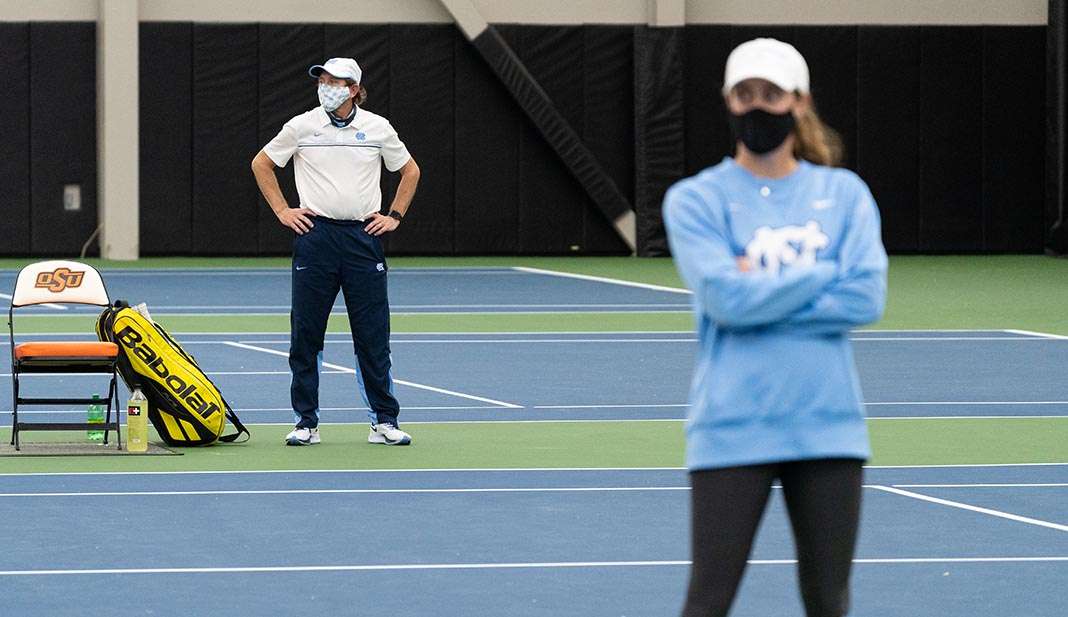 The championship match will be streamed on PlaySight at 6:30 PM. Play by play and commentary will be provided by Cracked Racquets.

The Tar Heels’ talent won out over No. 4 seed Pepperdine in the first semifinal of the day. Scotty and Morra quickly won at No. 2 doubles, while Graham/Daavettila and Tran/Sanford were threatening on courts one and three, but the Pepperdine duos hung tough. Ultimately, the Waves could not pull off the comeback in doubles and Tran and Sanford clinched the point. In singles, Morra and Jones powered through their matches to make it three points for the Heels. For the Waves, Pachkaleva rolled to a straight set victory over Scotty – not allowing a single game in the second set. After a tight first set, Jessica Failla was threatening to upset Alexa Graham, but UNC freshman Fiona Crawley clinched the match before she could finish. The Heels will meet up with the Texas Longhorns tomorrow at 6:30 PM CT to compete for the national championship.

The young Texas Longhorns came out swinging in the semifinals. In doubles, the senior pair of Turati and Labrana pulled the Horns even in doubles which left control of the doubles point in the hands of talented freshman Sun and Collins. The Texas tandem pulled off the upset over the No. 1 doubles team in the country — Bolton and Hart. With the momentum in their favor, Texas jumped out to a strong start in singles. The Horns won five of the six first sets. Stearns and Chavatipon both finished off their opponents in straight sets to put their team within one point of the championship. At 3-0, the Longhorns had opportunities to clinch the match on courts five and six with Lulu Sun working towards a win over Hart as well. The Bruins held tough and veterans Forbes and Hart tallied two points, while Altick extended her match to a third set. Ultimately, Texas’ Collins overcame an attempt from Goulak to extend the match and won in a second-set tiebreak.

Catch up on the action from Day 1 of Indoors!