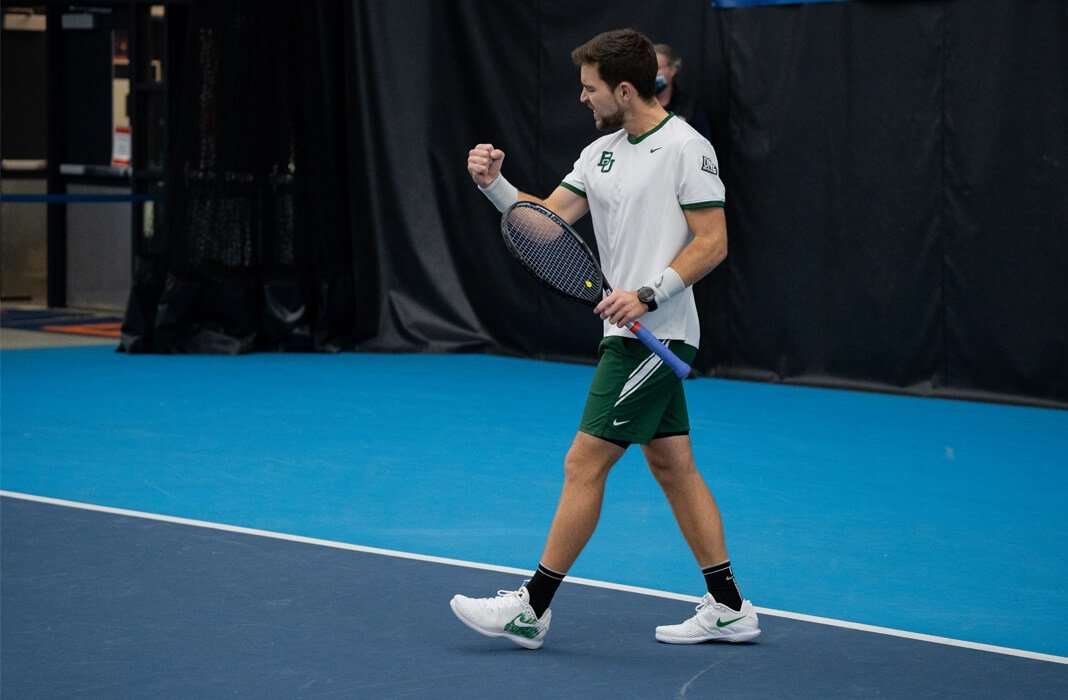 The first day of the ITA Division I Men’s National Team Indoor Championship saw two top seeds fall — including defending champions USC in the final match of the day. With the quarterfinals over, tomorrow will feature semifinal matchups of Virginia/North Carolina and Baylor/Illinois.

TCU will face Tennessee at 9 AM CT, while Texas and USC will play at 3:30 PM CT. All matches will be live streamed and scored.

The TCU Horned Frogs started their quarterfinal match against the Virginia Cavaliers hot. All three doubles teams went up 4-2 early. The Cavaliers started to come back, but TCU’s Gray/Fomba and Jong/Paroulek slammed the door both winning their match 6-3. In singles, the teams split the first sets. Virginia freshman Rodesch methodically worked through his match against Paroulek. He got the Cavaliers on the board after only dropping one game to his opponent. Four of the singles matches went to a third set. After dropping his second set to Montes De La Torre, Fomba roared back in the third to put the Frogs up 3-1. From there on out, it was all Virginia. Soderlund finished next for the Cavaliers with Ross following closely behind. Newcomer Von Der Schulenburg sealed the victory for the Cavaliers, 6-4, 5-7, 6-4. The Cavaliers advance to the semifinals tomorrow and will play against No. 2 North Carolina at noon CT.

The No. 2 seed Tar Heels defeated the Volunteers soundly. In doubles, Tennessee was up early at No. 2 and 3 doubles, but ultimately the Heels took the point. Kiger and Soendergaard came back in the tiebreak to win after being down 2-5. In singles, 6’6 Tennessee freshman Monday dominated the Heels’ No. 2 Hijikata. Monday won in straight sets to tally the only point of the day for the Vols. North Carolina’s singles finished in quick succession. Senior Soendergaard led the way with his 6-2, 6-3 victory over Harper. Cernoch defeated Hussey in identical sets and put the Heels one point away from the semifinals. Sigouin would seal the deal for the Heels. He downed UTR ITA Player of the Week Martim Prata in straight sets. North Carolina will battle Virginia for a spot in the finals tomorrow at noon CT.

Two weeks didn’t change much between the Bears and the Longhorns. Baylor still came out on top — this time not dropping a single point to the Horns. Much like their first meeting this season, the doubles point was tight. Texas and Baylor split No. 1 and 2 doubles to force a decision at No. 3. Stachowiak and Furman narrowly edged out Braswell and Harper in a tiebreak to put the Bears up early. The Bears rode their momentum from doubles into the first set of singles. They took all six first sets. Duke transfer Spencer Furman quickly added another point for the Bears at No. 6 singles. Fellow transfer Charlie Broom started out his second set down, but rallied back against Huang to take it 6-3, 6-4. The final point would come on court one for the Bears. Boitan downed Siem Woldeab in straight sets — an improvement from their unfinished three-setter from two weeks ago. Baylor will meet host Illinois in the semifinals tomorrow at 6:30 PM CT.

After dominating from beginning to end, Illinois pulled off the upset of No. 1 USC. In doubles, the Illini played the Trojans tight and came out on top. Montsi and Kenyatte clinched the point for their team and in the process downed the No. 1 doubles team in the country. The Illini rode the momentum from doubles into singles and took four of the six first sets. Freshman Weststrate and veteran Smith were the only Trojans to hold their own in the opening set. Illinois’ Kenyatte was the first to finish in singles rolling past Bradley Frye in straight sets. Montsi would then bring the Illini within one point of upsetting the defending champions. Senior Zeke Clark put Illinois over the top. He edged past Ryder Jackson with identical 7-5 sets. Illinois will battle No. 4 Baylor tomorrow at 6:30 PM CT for a spot in the championship.