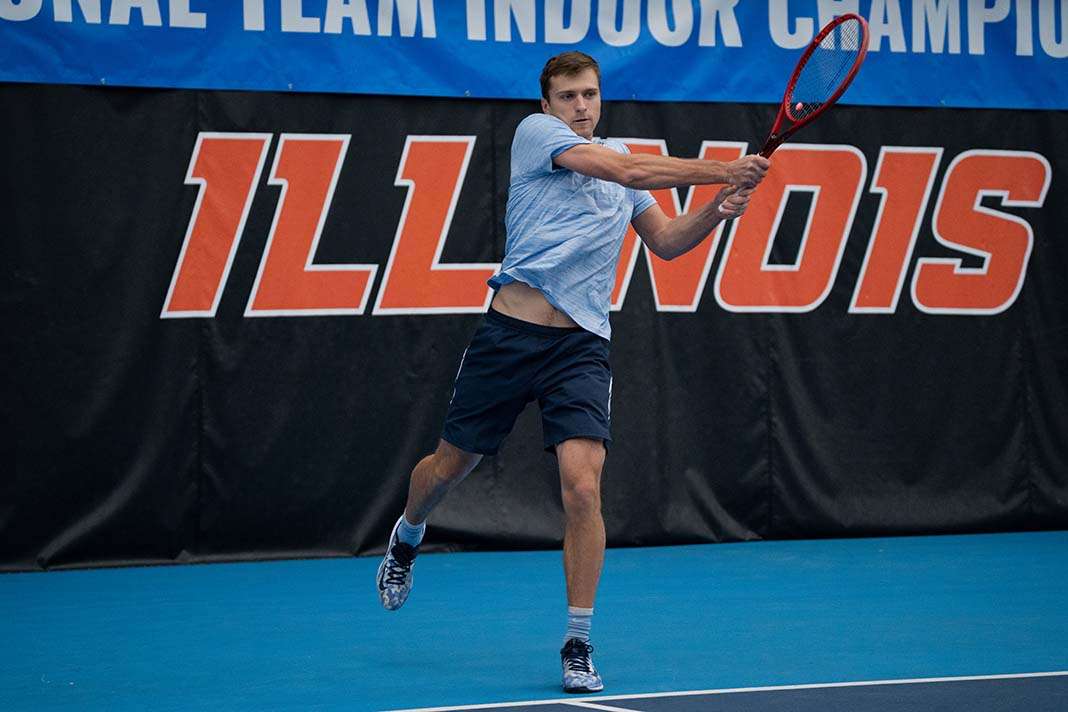 The 46th edition of the DI Men’s National Team Indoor Championship will feature No. 2 seed North Carolina against No. 4 seed Baylor. Tomorrow will be the Bears’ second appearance in the finals and the Heels’ third. Both will be trying for their second Indoors title.

The Championship match will be live streamed and scored tomorrow night at 6:30 PM CT. The three consolation matches will be played beforehand and will also have live streaming and scoring. Match times are subject to change.

It wasn’t quick or easy, but the Tar Heels defeated Virginia to advance to their third Indoors championship match. The doubles point went the way of the Cavaliers. After the teams split on one and two, the Virginia freshman duo of Montes de la Torre and Von der Schulenburg held off the late push from Sigouin and Hijikata to put the Cavaliers up one heading into singles. After the first set of singles, it became clear that the match would go the distance. The Heels took four of the six first sets with Peck and Soendergaard setting the tone with strong showings. However, it would be Virginia’s Von der Schulenburg that finished first in singles. It was a competitive first set, but frustration set in for UNC senior Sigouin as he dropped the set. From there it was all Von der Schulenburg. He blanked Sigouin to put Virginia up 2-0. The Tar Heels would answer though with four consecutive single wins. Soendergaard and Hijikata both finished in straight sets. Josh Peck added another point at No. 5 singles. With the path to victory narrowing for the Cavaliers, UNC’s Cernoch blocked it completely. He bounced back after dropping his second set to win 7-6 (6), 4-6, 6-2. Carolina will play for the national championship against Baylor tomorrow at 6:30 PM CT.

In one of the most dominate performances of the championship, the Baylor Bears defeated the Fighting Illinois 4-0. Baylor started hot and took the doubles point at No. 2 and 3 doubles with Lah and Frantzen on the verge of taking their match against Montsi and Kenyatte. In singles, the Bears took five of the first sets. At No. 5 singles, Charlie Broom powered through his match against Illini Hunter Heck. After Broom increased the Bears lead to two, Soto stepped up and defeated Brown in straight sets, 6-2, 6-4. With Baylor only one win away from securing their place in the championship, three Bears were in position to clinch. Boitan, Lah, and Furman all were a game away from victory, but it would be senior Furman to finish it out. The Bears will compete in their second ever Indoors championship tomorrow at 6:30 PM CT against North Carolina.

Catch up on the action from Day 1 of DI Men’s Indoors!