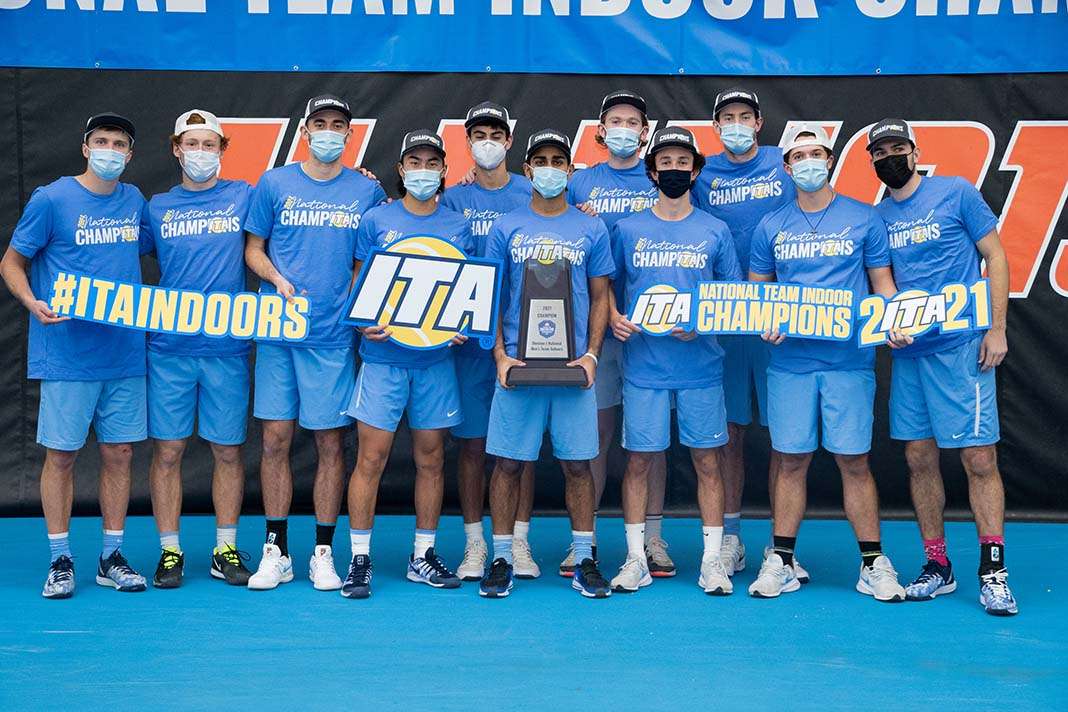 After being denied the national championship last year in Madison, the North Carolina Tar Heels clinched the 2021 DI Men’s National Team Indoor Championship title with a 4-1 victory over the No. 4 Bears. For the second match in a row, junior Brian Cernoch sealed the victory for the Heels — this time in a tight two-setter.

Despite there being no fans allowed in the building, the Atkins Tennis Center was buzzing with energy from the Baylor and North Carolina benches. Baylor took all three first games in doubles, but the Heels kicked it up a notch to take the lead. At No. 3 doubles, Hijikata and Sigouin leaped out to a lead finishing first for Carolina. Mac Kiger and Simon Soendergaard would clinch the doubles point for UNC after holding off the late push from Broom and Soto. On court one, Blumberg and Cernoch were locked in a back-and-forth battle with Lah and Frantzen. They were tied at five-all at the time of the clinch.

Carolina started singles strong — they took four of the six first sets. Charlie Broom was one of the two Bears to take his first set. The Dartmouth transfer blew through the first set blanking senior Tar Heel Josh Peck. Broom would take his match to tie the match at one-all.

The Bears dug in during their second sets determined to not let the Heels run away with the match. At No. 6 singles, Furman answered Soendergaard with a 6-3 second set after dropping the first 2-6. Baylor’s No. 1 Boitan also fought back taking No. 2 Blumberg to a second-set tiebreak before ultimately falling to the senior Tar Heel. Fellow Carolina senior Sigouin added another point for the Heels after downing Lah in straight sets.

The final point came from Cernoch on court four. His match with Baylor’s Stachowiak was a battle from the beginning. Cernoch was the last player to finish his first set — taking it in a tiebreak. The second set proved to be no different. Cernoch was a game away from victory when Stachowiak tied it at five-all. He would lock-in after that though and take the next two games. Victory came for the Heels as Stachowiak’s return went long.

The 2021 title is the second Indoors national championship for North Carolina. The first came in 2016 under Coach Sam Paul against Virginia. The North Carolina Men join the North Carolina Women as 2021 DI National Team Indoors Champions. UNC becomes the first school to win both the men’s and women’s Indoor Championships in the same year since Stanford in 2000.

Read how the Heels and Bears got to the championship!