ITA #WeAreCollegeTennis
Home College Tennis News DIII Men Black History Month: If You Can See It, You Can Be It 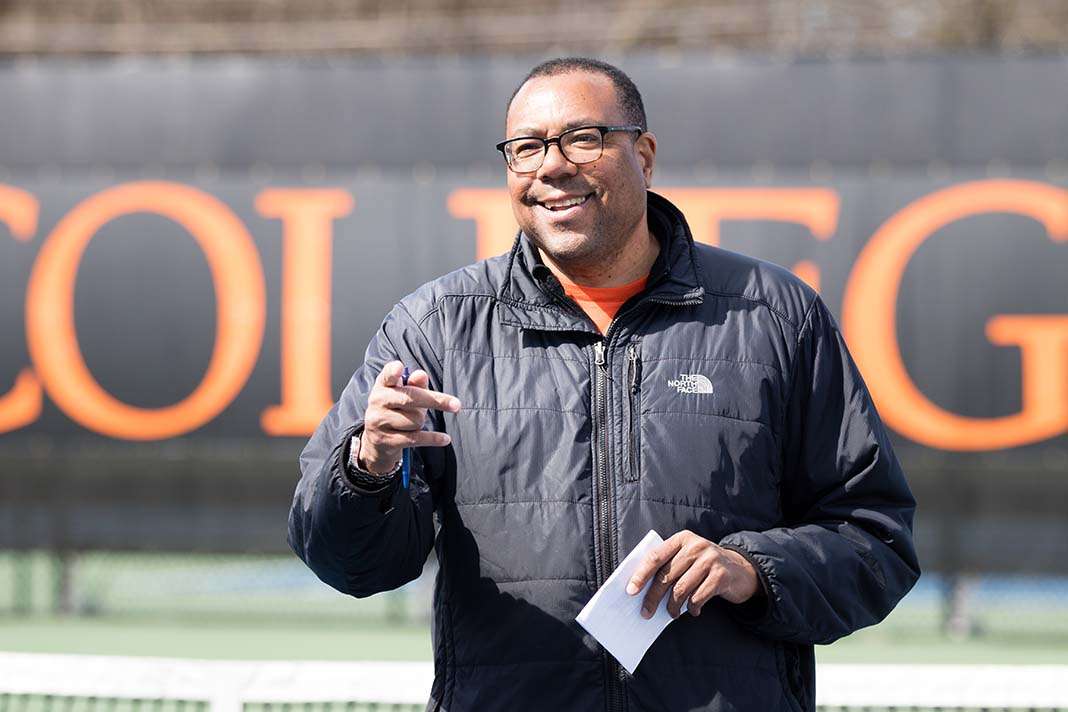 Throughout the month of February, the ITA is highlighting some of the Black student-athletes, coaches, and administrators that make up college tennis.

Kalamazoo Head Men’s Tennis Coach Mark Riley knows college tennis inside out. Riley was a standout for the Hornets in the eighties and has since made several head coaching stops before returning to coach at his alma mater. In addition to mentoring the young men on the Kalamazoo team, Riley looks to inspire juniors that compete at the USTA Boys’ 18 & 16 National Championship to dream big.

ITA | During your playing days at Kalamazoo, you were a two-time captain and an All-American. What are some of your fondest memories from then?

Road trips with my team mates, working each season to improve on and off the court, working toward a National Championship. Unfortunately, as a team we didn’t quite make it — we were runners-up in 1982.

ITA | Was coaching always the career route that you envisioned for yourself or was there an experience in college that influenced that decision?

I always wanted to coach. Our legendary coach, George Acker, seemed to enjoy coaching his teams and had such a positive impact on his players. After graduation, a lightbulb went off! I thought maybe I could have a positive impact on others and make a living in the coaching industry…what a combination!

ITA | Have you seen the experience of a Black tennis player change from when you played in college to now?

I hope so. I don’t think we have enough players of color that have evolved to the top, but a good example is the Michigan women’s player – 2017 NCAA National Champion Brienne Minor. We need to share that story and what she is doing off the court after graduation. It’s nice to see Frances Tiafoe go from winning the Boys’ 18 National Championship in Kalamazoo in 2015 to a top 40 ATP tennis player. As a young player, he can have impact on people of color and young people in general who are following tennis and becoming and staying engaged in our great sport of tennis.

ITA | Previously you coached at UPenn. What was a driving factor in taking the job at Kalamazoo?

The driving factor of me taking the job at Kalamazoo College was being hired by our then president Eileen Wilson-Oyelaran. To have the opportunity to learn from a leader who looked at me was an opportunity of a life time. During the interview process, she let me know I was truly wanted to lead our tennis program and coupled with the opportunity to be the director of the Boys’ Nationals Tennis Tournament — it was a dream job. I am now starting year 15 in Kalamazoo.

ITA | You are an alum of the Kalamazoo tennis program. How does coaching at your alma mater change the coaching experience?

As an alum, I realized the Kalamazoo College tennis program can teach our student athletes countless lessons: leadership, time management, life long relationships made, opportunity to win conference championships and compete for national championships each season. Kalamazoo College gives student athletes an excellent academic and tennis experience and an opportunity to make memories of a lifetime.

ITA | You have won two Ivy League Championships, been honored with numerous coaching awards, and coached a student-athlete to the finals of the NCAA Singles Championship. Out of all your accomplishments, what is the most rewarding part of coaching for you?

I have been blessed with numerous coaching awards, many student athletes who have thrived on and off the court — Academic All-Americans, all-conference selections, Davis Cup players, and Olympians. But the most rewarding part of the job is the long lasting relationships I have with my players. I am still very connected with former athletes from Drake, KU, Penn, Kalamazoo College and that connection also goes back to my female athletes from my assistant days at Penn. I know this – without excellent students that have been part of our programs, I couldn’t be a “good coach.”

ITA | With Black Lives Matter being brought to the forefront this summer, how did you address the topic with your team?

We spend time talking about social injustice. We talk about how as men, how we can use our privilege to make our community a better place and more accepting environment to live in. My players and I have to continue to find ways to help our underserved and underprivileged.

ITA | How can coaches make an intentional effort to promote diversity and inclusion on their teams?

I think as coaches, we take time during our practices. While hitting balls is part of the deal, we have to find time to ask ourselves difficult questions and have challenging conversations regarding diversity and inclusion. For example, the problems that the NFL has with people of color getting head coach/GM jobs. If this happens in a league that is 70% black, how do we have diversity in a sport like tennis or in board rooms of white corporate America? I hope that my players learn that as they earn positions of leadership and hiring that they can be more comfortable in hiring people that look different and have different belief systems – this can be a way to change “the system.”

ITA | In addition to being the head men’s tennis coach at Kalamazoo, you’re also the director of the USTA Boys’ 18 & 16 National Championship. How can we help elevate young Black tennis players to the collegiate level?

I hope to be an example for others, especially men and women of color. “If I can do it, they can do it.” I still remember clearly what got me hooked on tennis. It was an exhibition match I saw live in Philadelphia as an eight year old kid…Pancho Gonzalez versus Arthur Ashe — brown people doing it. “If you see it, you can be it.” Experiences like that enables many to dream. And as I tell all of my players and young folks, dreams are free. Being able to dream has certainly led me to a good place in the tennis world.