When deciding on colleges, academics were even more important to me than tennis. My father, a Greek immigrant, and mother instilled in us the value of education along with a love of tennis. My sister, Stacy, played Division I tennis at UC Berkeley and my brother, Tom, played at Harvard. Like many top ranked junior players, I had aspirations to compete on the pro circuit after college, but I also knew that eventually my tennis career would end and I would want a professional career beyond tennis. Choosing Stanford University was the best choice I could have made.

My coach at Stanford during the 1980s was Frank Brennan. We had eight scholarship players and Frank called us the “eight prima donnas” since we all came into college accustomed to being the star. It was humbling to suddenly be around so many other star tennis players and students at Stanford, yet it pushed us to be better. By the time the NCAA tournament came around, Coach Frank found a way to bring us all together as a cohesive team. We developed a mutual respect for one another which drove us to rally around each other and dig down deep to find a way to win. Our Stanford team ended up winning the NCAA Championships three of the four years I was there.

The one year we did not win was my sophomore year and ironically that was the year we probably had the best team. We got overconfident and did not take one of our opponents seriously enough and ended up getting upset! It was devastating!! That experience taught all of us a valuable life lesson. It motivated us to never again take any opponent for granted and instead we over-prepared for every match after that. As a result, we ended up winning the NCAAs the next two years, and then the Stanford women continued the winning ways for another four years to go onto win six NCAA team championships in a row. Once we got on a roll of winning, we developed an inner confidence where we just knew we could find a way to win.

That confidence of knowing I will come through in the clutch and making sure I am always prepared helped get me through law school, pass the bar exam on the first try, practice as an attorney and then as a real estate broker, and basically has helped me in life.

My favorite memories of playing college tennis though were the friendships with my teammates; playing on the stadium courts at Taube Tennis Stadium at Stanford with stands packed full of screaming fans, friends, and teammates; team trips with the men’s team too; and the thrill of clinching a team victory! Thank you, Stanford, for these wonderful memories and experiences. 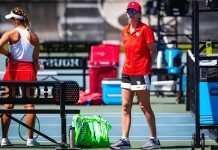 2022 ITA Summer Circuit Points Race Gets Underway as the First...

Get To Know… Stefan Bojic