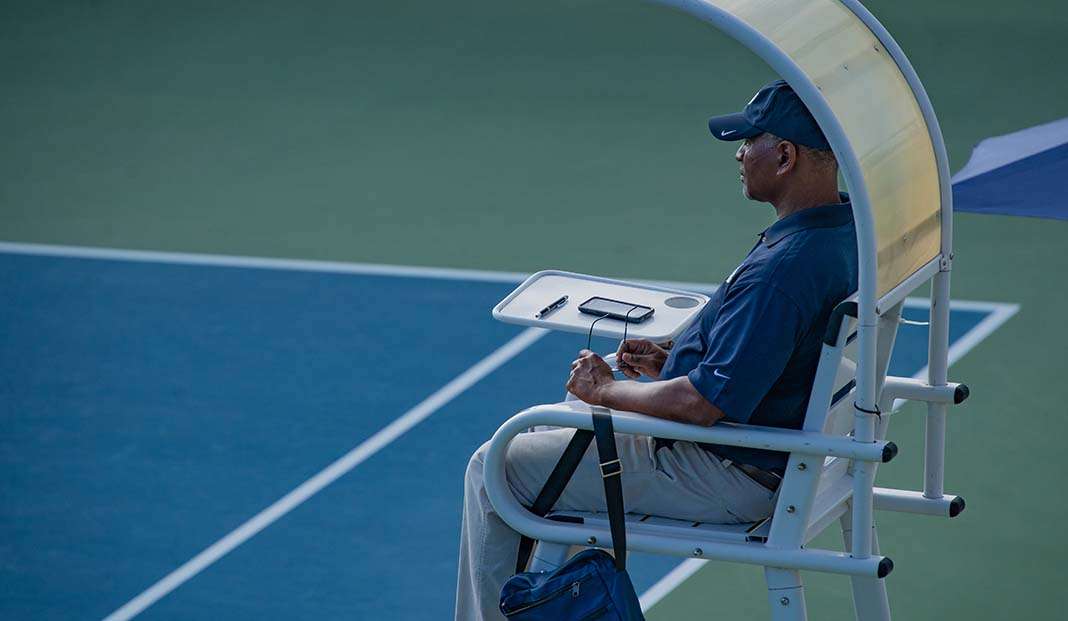 Throughout the month of February, the ITA is highlighting some of the Black student-athletes, coaches, officials and administrators that make up college tennis.

Reliford Sanders is a familiar face at national championships – whether it be ITA or NCAA. As a longtime ITA official, Sanders has called many exciting championships and has helped facilitate the great sport of college tennis. Currently, he is serving as the co-chair of the ITA National Officials Committee.

He brings insight about college tennis from another viewpoint — the official’s chair.

ITA | How did you get involved with tennis?

In my early teens, my father brought home two cheap metal racquets. We went to “play” on the local park courts. Neither of us had a clue what we were doing, but I was hooked. I spent many summer days at the tennis courts, often just waiting for someone to hit with.

ITA | You have a PhD in psychology. What did you do before becoming an official?

I spent a total of 20 years in college counseling as a Licensed Clinical Psychologist at the University of Arkansas and Virginia Tech.

ITA | When and why did you become an ITA official?

I became an official in 1999 at the urging of my friend, Mike Standrod, who was a USTA teammate and local assigner. He said they needed officials for the university. A few weeks later, I went to watch a dual. A week after that, I was chairing my first match.

Each of those matches hold special memories, and each one is different. There is a rush that comes with the gravity of the moment, and I always am honored that the powers that be have entrusted me to officiate those matches.

ITA | How does your background in psychology help you navigate tense situations in matches you call?

I remind myself that although the circumstances may change (e.g., more linespersons, more vocal fans, hyperexcited coaches), nothing in my performance should change. If I bring my “A-game” all the time, I don’t have to worry about bringing my “A-game” to the big matches. Also, I tell myself that I’m in the chair at this specific moment because 1) the person who selected me trusts my abilities; 2) I am qualified to chair this match; and, therefore; 3) I deserve to chair this match. Before the match, I try to get some time alone to get grounded, and to go over verbiage and possible scenarios in my head. Most times, this works.

ITA | As a Black official, have you had athletes treat your calls differently than those of your white colleagues?

I don’t see myself as a Black official. I view myself as an official who is Black. I am aware there have been incidents of unconscious bias due to the color of my skin. However, I cannot allow their ignorance and bias to interfere with me doing my job. I let their problems with me be their problem.

ITA | Why is it important for people from all backgrounds to become an ITA official?

The ranks of tennis officials should reflect the demographics of the general population. Sports are better when all people are represented and have a seat at the table. Players, coaches and spectators benefit from seeing diversity in our officials.

ITA | What is the most rewarding part of being an official?

The most rewarding part of being an official is when my presence has helped a match progress smoothly and fairly. As an official, there is no greater feeling than knowing you have made the correct decision according to the rules, you have made a correct line call, and/or you have helped a player or coach move forward from a difficult situation.

ITA | What is your favorite match that you’ve called and why?

While all national championships are special, there is one that stands out. I chaired the deciding match in the 2011 NCAA Division I men’s team championship. Both players were playing tentatively, obviously nervous. What made the match a favorite was to listen to how the opposing coaches dealt with the situation. The winning coach said to his player, “Look me in the eye son. You’ve played well for me all year and I’m proud of you. Whatever happens, I won’t be disappointed. Just go out there and have some fun.” The coach relieved the player of all pressure, and the player responded. That is some of the best coaching I have ever witnessed.

ITA | If someone was thinking about becoming an ITA official, what would you tell them?

If you are a perfectionist or have thin skin, this is not the job for you. Be committed to knowing the rules and how to apply them correctly. Learn through watching your colleagues. Ask questions. Learn from your mistakes.

Interested in becoming an ITA official? Learn more about the process here.