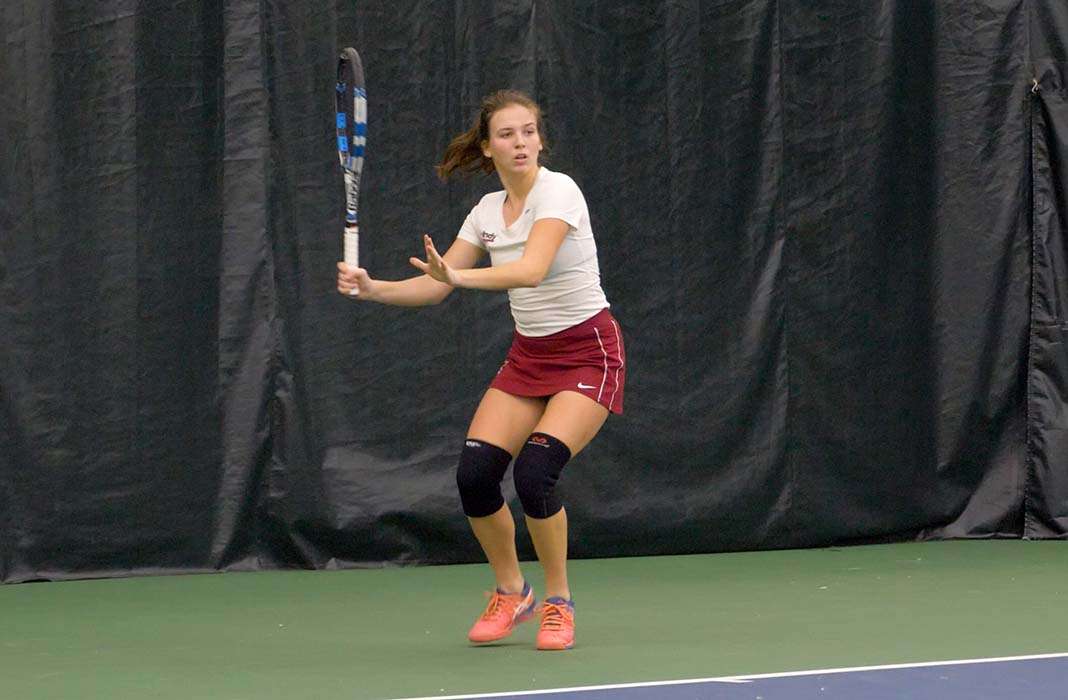 The first day of the ITA DII Women’s National Team Indoor Championship saw plenty of competitive matches and upsets. The No. 2 and 3 seeds fell in the first two matches of the day. The only decisive victory of the day came from one-seed Indy. The Greyhounds rolled past Midwestern State without giving up a single point.

Tomorrow, the semifinal matches will take place at 11:15 AM CT and 5:45 PM CT. Angelo State and Southwest Baptist will meet in the early match, while Indianapolis and Central Oklahoma will play in the last time slot. All matches will have live results provided by Tennis Ticker.

First time competing at Indoors, first win at Indoors, first top 10 win in program history for Angelo State. The Belles took West Florida the distance in the opening round match clinching on court three in three sets. No. 7 West Florida went up early in the match after claiming the doubles point. In singles, the Argos would win in straight sets at No. 1 and No. 4 singles, while Angelo State’s Ovcina got her team on the scoreboard with her own straight-set victory at the No. 2 position. With the score at 3-1 West Florida, the final point would be elusive for the Argos. Angelo State’s Becht would pull her team within one point after winning on court six. On court five, the match between Echevarria and Gubbels swung back and forth, but after ties at four-all, five-all, and six-all Gubbels sealed her win making court three the deciding match. Silanwanowicz started her third set strong, but ASU’s Rodriguez dug in and took the match sending the Belles to the semifinals. Angelo State will face Southwest Baptist tomorrow at 11:15 AM CT.

In a marathon of a match, Southwest Baptist edged out No. 5 Columbus State for a spot in the semifinals. The Cougars took the lead early after winning out in doubles, but SBU didn’t take long to shoot out to a 2-1 lead. The Bearcats took five of the six first sets in single and won on courts one and five in straight sets. Columbus State would answer with two straight singles wins of their own to go ahead by one. SBU’s No. 2 Cabrera was able to close out her victory over Sachs with a decisive third set after dropping a close second set. Much like Sachs, Zheng had the opportunity to clinch the win for the Bearcats during her second set, but Columbus State’s Ramirez was able to force a third set. After a bit of back-and-forth early in the third, Zheng took control and slammed the door on Ramirez and the Cougars’ chances. With Zheng’s clinch, the Bearcats moved on to their first ever Indoors semifinal. They will face Angelo State tomorrow at 11:15 AM CT.

The Indy Greyhounds blanked No. 16 Midwestern State to claim the third spot in the semifinals. The Greyhounds took a commanding lead in doubles winning on on courts one and three. Continuing her strong performance in doubles, ITA Singles All-American Alekseeva notched the first singles win for her team. In her straight-set victory, she only dropped two games to Midwestern State’s Hollebeck. Fellow singles All-American Kislitskaya followed suit and added a straight-set victory of her own. The other point came from No. 5 singles Sholnyshkina. The only MSU student-athlete who took their first set was Dowling at No. 6 singles. Tomorrow, the Greyhounds will matchup against Central Oklahoma in the 5:45 PM CT semifinal.

In the nightcap match, No. 8 Central Oklahoma advanced over No. 10 Flagler. The win was the first main draw Indoors win in program history for the Bronchos. In doubles, Flagler’s Schlagenhauf and Hrda decidedly defeated ITA Doubles All-Americans Abidulina and Dunlap. The Saints would go on to take the doubles point on court three, but UCO would make them fight for it. In singles, the Bronchos took five of the six first sets. Central Oklahoma standout Abidulina would finish first on court one tying the match at one all. Teammates Buntrock and Boyer would follow up with a win of her own on courts five and six. UCO’s final point would come from their No. 2, Mae Canete. After being denied a victory in the second set by Hrda, she answered with a perfect 6-0 third set. The sole Saint to win a singles match was Nissen who defeated Landin in straight sets. Central Oklahoma will face Indianapolis tomorrow in the semifinals.