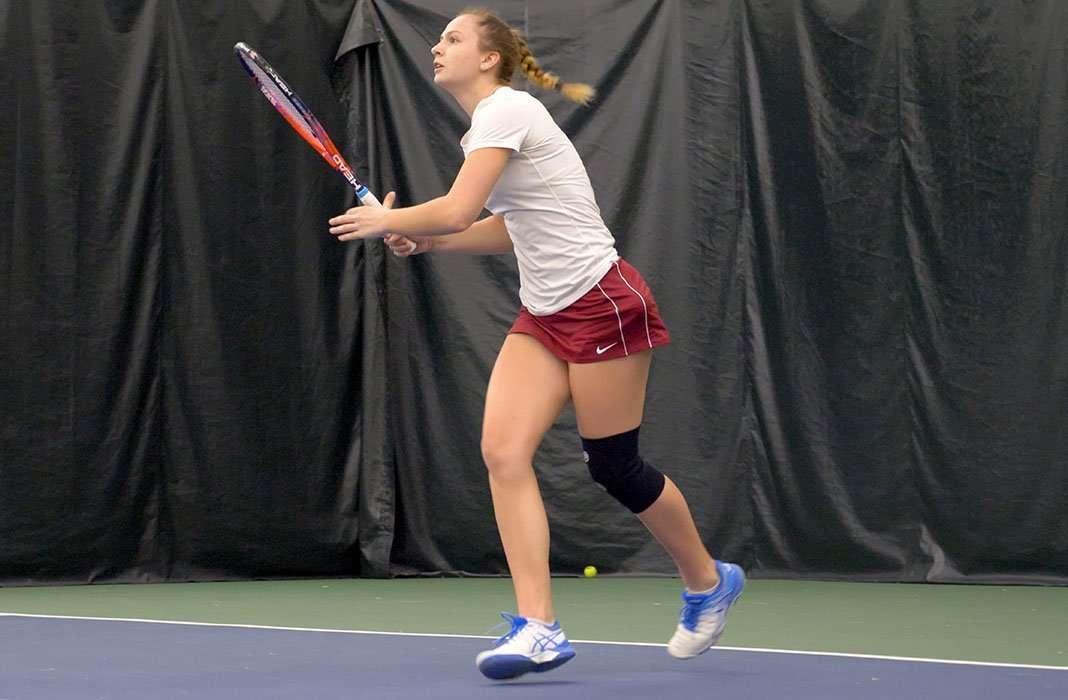 The semifinal round of the ITA DII Women’s National Team Indoor Championship was a story of opposites. The first semifinal match of the day saw a grind-out fight between two unseeded teams, while the second semifinal featured the No. 1 seed blanking the No. 4 seed.

Tomorrow the Indy Greyhounds and Southwest Baptist Bearcats will meet to compete for the Indoors national title. A win tomorrow would be a first for either program. The two teams played each other exactly one week ago Sunday — the Greyhounds walked away with the 6-1 victory the first time.

Live results will be available for all four matches at Edmond Center Court on Sunday.

In a battle between two underdogs, the Southwest Baptist Bearcats came out on top. In doubles, the Bearcats struck first winning easily on court three, but the Angelo State Belles were not done yet. ITA Doubles All-Americans Gonzalez and Ovcina won out in a tiebreaker to keep their team in contention for the doubles point. Unfortunately for the Belles, SBU’s duo of Pascual and Zheng won out giving the Bearcats the advantage heading into singles. Crespo would be the first to get on the board in singles. The SBU junior locked in after winning her first set and served her opponent a bagel in the second. Angelo State would answer with two wins of their own at No. 3 and 6. Junior Zheng would put Southwest Baptist within one point of the championship match. The Belles, fighting to stay alive once again, tied it at three-all with Gonzalez’s three-set victory. The tie, however, was short-lived. Cabrera shut the door on the Belles’ chances and sent her program to the championship match with a straight-set victory over Ovcina. The Bearcats will compete in the Indoors championship match tomorrow for the first time ever.

The University of Indianapolis Greyhounds continued their dominance at Indoors by downing host Central Oklahoma 4-0. The win brings Indy’s winning streak to six straight wins on the year. The Greyhounds were in control of the match from the start. In doubles, they clinched the point by winning on courts two and three. In singles, five of the six first sets went the way of the Greyhounds, but not without some fight from the Bronchos. Four of the first sets were decided in a tiebreaker — all going the way of Indy. UCO junior Landin was the sole Broncho to take her first set. Indy’s No. 6 would be the first to win her singles match. After edging out Boyar in the tiebreak, Sharonova put together a statement-making 6-1 second set to take the match. On court three, Kislitskaya recorded her own straight-set victory to put the Greyhounds within one point of the championship match. Indy standout Alekseeva clinched the match for her team. She downed UCO’s Abidulina in straight sets. The Greyhounds will appear in the championship for the first time tomorrow.

Check out the action from Day 1 of the DII Women’s Indoors!