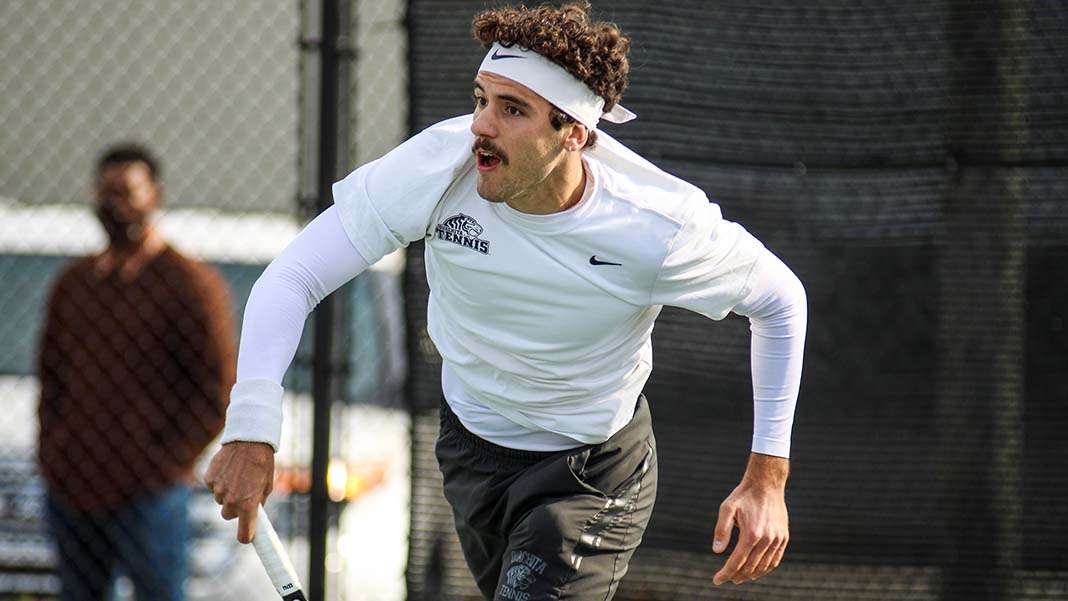 The UTR ITA Player of the Week awards were given out this week to men and women from Division I and II along with NAIA and Junior College. All of the recipients had an outstanding week of play and shined for their respective teams. Their success was reflected in the change in their UTR — which was as large as an 0.75 point increase.

The DePaul Blue Demons went 3-0 this past week – in large part due to their No. 1 player, Vito Tonejc. Tonejc went 3-0 in singles and 1-0 (with two matches unfinished) in doubles. The junior Blue Demon played a crucial role in DePaul’s 4-2 victory over Northern Illinois. He clinched the match after coming from behind in his match with Bor Muzar. Tonejc followed up his match-clinching performance with a strong straight-set win over Drake’s No. 1 Oliver Johansson. After easily taking the first set, Tonejc had to outlast Johansson in a tiebreak to put his team up 2-1 in the match. The UTR ITA Player of the Week Award is the first national award for Tonejc.

Louisville junior Rhea Verma showed out in singles this week. She went undefeated in singles across the Cardinals’ two dual matches — including against No. 14 Virginia. In fact, Verma was the only Cardinal student-athlete to record a point against the Cavaliers. At No. 5, Verma downed Vivian Glozman in straight sets to put her team on the board. Earlier in the week, Verma notched another straight-set victory – this time over Virginia Tech’s Katie Andreini.

It was a big week for the Ouachita Baptist Tigers and for junior Francisco Oliveira. Oliveria started off the week by blowing past West Alabama’s Christopher Bulus only allowing his opponent two games total. The victory was a part of Ouachita Baptist’s upset of No. 20 West Alabama. Oliveira continued his winning ways on Monday earning a straight-set victory over Mississippi College’s Ballatore. The win brings his winning streak to eight straight on the spring season. Oliveria also went undefeated in doubles over the week.

Casie Curry and the Midwestern State women’s tennis team had a busy week. Curry played in four singles matches over the last week and won all of them. She repeated that same feat for doubles. The MSU sophomore started out the four-match stretch by clinching the match against Southeastern Oklahoma. Curry followed up that clinch by helping the Mustangs clinch the doubles point over Southern Arkansas. Curry won all, but one of her matches in straight sets. The one match that went to three sets was against Oklahoma Baptist’s Jenna Noel. After taking the first set against Noel, Curry dropped a close second set forcing the match to be decided in a tie break. Curry currently holds a singles win streak of four matches.

Consistent might be the best word to describe Martin Barbier. Through the Cumberlands’ three dual matches last week, Barbier went undefeated and finished first for the Patriots each time. Barbier defeated Grace College’s Sandi, Indiana University East’s Faundez, and Marian’s Camilo Mesa in straight sets. Between the three matches, he only allowed his opponents 18 games. Doubles was the same story. Barbier and his partner Banoub rolled through their opponents going undefeated on the week. Barbier has not lost a singles match the entire spring season.

Georgia Gwinnett freshman Iryna Lysykh shined this past week for the Grizzlies. Lysykh went undefeated across three dual matches in singles and doubles. She started the week by notching back-to-back wins over Montevallo players. In GGC’s doubleheader with Montevallo, Lysykh clinched the first match with a 6-4, 6-1 victory over Hafner. She followed up the victory with another straight-set win over Turro. In her final match of the week, Lysykhrecorded another straight-set victory – this time over Indiana Wesleyan’s Mendez. Lysykh currently holds a seven-match winning streak in dual match play.

Ane Ibarra was a bright spot this week for the Cowley Tigers. The sophomore went undefeated in singles and doubles this week including a nailbiter over Tyler JC’s No. 3 doubles team. In the match against the Apaches, Ibarra and her partner Oria edged out Yoshimura/Chan in a close 8-7 (4) match. In singles play, Ibarra was much more dominant. She won both matches in straight sets – only allowing 11 games between the two matches. Ibarra currently holds a four-match win streak in singles.