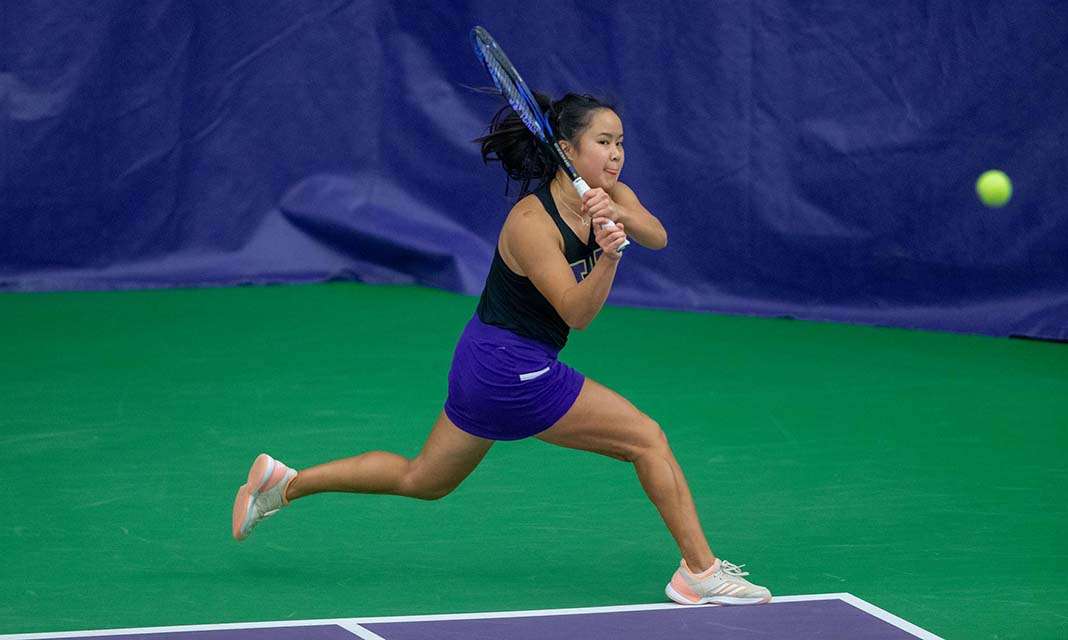 The UTR ITA Player of the Week awards were given out to men and women from all five divisions of college tennis. All of the recipients had an outstanding week of play and shined for their respective teams. Their success was reflected in the change in their UTR — which was as large as a 0.61 point increase.

SMU graduate student Clarke Wilson continued his dominance at No. 5 singles this week bringing his win streak to six straight. First up for Wilson was San Diego’s Schaber. Wilson’s win over Schaber increased the Mustangs’ lead in the match to 3-0. On Sunday, Wilson put together a straight-set victory over South Florida’s Montesa. After taking his first set 6-4, Wilson had to grind out the second set in a tiebreak to secure the victory.

Washington senior Vanessa Wong led the way for her team in their matches with Arizona State and Arizona. Wong was undefeated in singles and doubles on the week. In the Huskies’ first match of the week against the Wildcats, Wong got the momentum rolling and put her team up 2-0. She defeated Arizona’s No. 1 Wilkins in straight sets. It was a similar story for Wong during the Arizona State match. Facing ASU’s Hattingh, Wong powered through to a straight-set victory. The senior was the sole Husky to win a singles match against the Sun Devils.

Blazer freshman Christian Wedel stepped up this week to help his team go 3-0. Valdosta State started off the week blanking No. 21 Washburn. Playing at No. 3 singles, Wedel was the finishing blow for the Blazers. He clinched the match with a 7-5, 6-2 victory over Paul Haase. Wedel’s next two singles matches would stretch to three sets, but the freshman ultimately walked away with the wins. In his sole doubles match of the week, Wedel and partner Trigolos downed Shorter’s Cirkovic/Gunnell.

Missouri Western State’s Ioanna Lathouri set the pace for the Griffons at the top of the lineup. Lathouri went undefeated in singles and doubles against Southeastern Oklahoma State and Oklahoma Baptist. To start the weekend, the Greek junior downed Zulay Castaneda in straight sets. The next day, Lathouri outlasted Oklahoma Baptist’s Noel in a competitive three-setter. After taking the first set with ease, Lathouri barely dropped the second set forcing a tiebreak. In both matches, Lathouri and Chavez defeated their doubles opponents by a score of 6-2.

This week Gustavus Adolphus sophomore Daniel Fouchier remained undefeated on the young season in singles and doubles. Fouchier was in the lineup for Gustavus against the University of Wisconsin-Eau Claire. Paired with Sanga, he notched an 8-3 win in doubles for his team. He followed up the doubles victory with a dominant singles win against Demetri Bush. Fouchier has only allowed his opponents three games total through his first two singles matches of the season.

Junior Allison Ivey helped lead the Berry Vikings to back-to-back victories over Hendrix College this week. Playing at No. 1 doubles alongside Mascagni, Ivey defeated Burks/Ayers twice. The Vikings duo blanked their opponents during the first meeting. On Saturday, Ivey faced Eleanor Burks at the top of the lineup. Ivey had little trouble defeating Burks — only allowing three games total. She currently holds a three-match win streak in singles.

Moises Sosa was a standout for the IU East Red Wolves this week. The junior went undefeated in singles play this week — including a tough matchup against the dominant Georgia Gwinnett Grizzlies. Last Thursday, Sosa faced GGC’s No. 3 Czepielewski — he took the match in a third-set tiebreaker. Sosa was the only Red Wolf to win a singles match against the Grizzlies. He followed up his big win with a near shutout of Freed-Hardeman’s Calandre.

Cumberlands sophomore Mikaela Fros had a busy week. Fros went 3-1 in singles and doubles – her losses coming at powerhouse Georgia Gwinnett. Paired with partner Tomomi Nagao, Fros rolled through her doubles matches against Cambellsville, Bethel, and Freed-Hardeman. In singles, Fros reached a six-match win streak after downing Freed-Hardeman’s Board in straight sets – 6-1, 6-2. On Monday, her streak came to an end as she could not overcome Georgia Gwinnett’s Koplova despite putting up a good fight.

The Cowley Tigers took their team on the road to rival Seward County and handed the Saints their second loss on the season. Cowley freshman Takeshi Taco Matos played a large role in the victory. Playing at No. 1 doubles with Jack Clements, Taco Matos won his doubles match against Frequelin/Savary to start the day strong. Taco Matos then faced Savary in singles — he shut him down in straight sets.

This past Thursday, the Cowley Tigers traveled to the Seward Saints’ home courts and left with a win. Part of the Tigers’ success is due to sophomore Andrea Rodriguez Oria. Rodriguez Oria swept through her singles and doubles matches. Alongside partner Ibarra, she dominated Torrico/Vogelzang. Playing at No. 5, she handed Torrico another loss in singles.