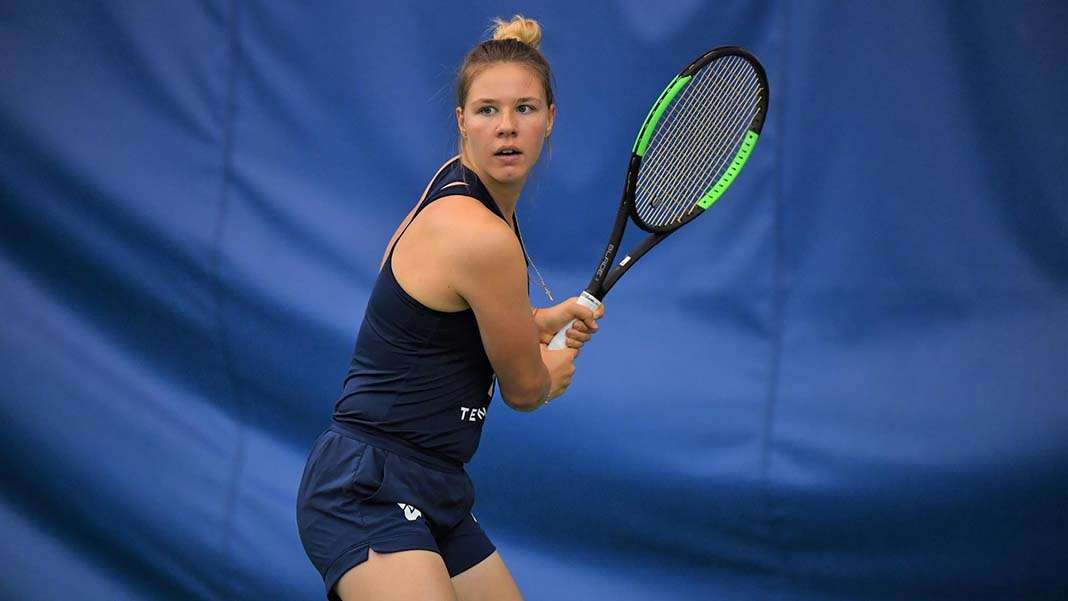 With all five divisions in college tennis back to competing, the UTR ITA Player of the Week awards were given out to 10 student-athletes – five men and five women – this week to celebrate their success. All of the recipients had an outstanding week of play and shined for their respective teams. Their success was reflected in the change in their UTR — which was as large as a 0.45 increase.

Wisconsin’s Jared Pratt had a big week for the Badgers going 4-0 across singles and doubles play. Pratt and partner Parts clinched the doubles point in Wisconsin’s duals with Indiana and Purdue. The junior went on to win the only singles match of the day for Wisconsin. He sped through his match with the Hoosiers’ No. 2 Andrew Redding. On Sunday, Pratt sealed the shutout for the Badgers over Purdue. He defeated Michal Wozniak in straight sets.

West Virginia’s Anastasiia Bovolskaia shined for the Mountaineers this week. Playing at No. 1 singles and doubles, she reeled in wins in both of her singles matches along with going 1-0 in doubles. On Friday, Bovolskaia and her partner Maslova soundly defeated KU’s Smagina/Karvouni. The junior continued her success into singles and rallied to defeat Smagina in a third-set tiebreak – 6-4, 3-6, 1-0 (10). She was the only WVU player to win her singles match. Against the Wildcats Bovolskaia once again found herself in a tiebreak. She edged out Kansas State’s Job in straight sets to get the Mountaineers on the board.

Freshman Alvaro Chavez showed up big time for the Aggies this week. In Cameron’s duals against Dallas Baptist and Midwestern State, he was the clinching match. During Friday’s match against MSU, Chavez rallied to defeat Alexandre Crepy in the third set. He followed up his clinching performance with another the next day. Chavez handily defeated DBU’s No. 4 man – Hunter Terrell – in straight sets.

Northeastern State’s Maria Popova continued to bring the heat at the No. 2 position for the RiverHawks. Across singles and doubles play, the junior went 4-0. Alongside partner Jayaprakash, Popova recorded two doubles victories bringing her record to 4-2 on the season. In singles play, Popova only allowed 11 games total to her two opponents. Against Nebraska-Kearney’s No. 2, she swept through the first set and sealed the victory, 6-1, 6-4. Her singles victories bring her win streak to four straight.

Coe College junior Jon Lansing helped his team to two straight sweeps this week. First up, Lansing and partner Meskell downed Cornell College’s No. 2 team – only allowing one game to their opponents. Lansing and Meskell hit repeat against Nebraska Wesleyan and won their match against Olsen/Retzlaff to the tune of 8-1. In singles play, Lansing downed NWU’s Radamacher in straight sets. The victory was his third straight singles win.

Last Saturday was a pretty good day for Concordia sophomore Brianna Bell. Not only did she clinch the match for the Cobbers, but the win was the first victory for Concordia in the spring season. Playing at No. 4 singles, Bell took the first set 6-3, but Northwestern-St. Paul’s Dodge flipped the script and took the second set 6-3 as well. With the match on the line, Bell was able to build a lead in the tiebreak and clinch the victory for her teammates.

Georgia Gwinnett’s Matthias Haim had no issue this week defeating his challengers from Division III Emory. In doubles, he paired with Bonacia at No. 1 to defeat Cassone and Rabinowitz 7-5. After the Grizzlies clinched the match, Haim piled on another point to bring the score to 5-0. He downed Andrew Esses in straight sets – only allowing four games total.

Asbury’s Kendall Jablonowski remained perfect throughout singles and doubles play this week. In Asbury’s sweep of Oakland City University, Jablonowski and partner Lerma defeated Kulynych/Barbosa 6-4. The junior continued her success into singles and knocked off their No. 1 player 6-0, 6-2. On Saturday, Jablonowski and Lerma blew past Indiana University Southeast’s No. 2 duo. Playing at No. 2 singles against IUS, Jablonowski posted identical 6-2 sets to seal a win.

Cowley freshman Andoni Garmendia showed his tennis prowess through his matches with Barton County and Division II Drury. Garmendia shined in singles play – only allowing five games total to his two opponents. Against Barton Community College, he faced Victor Pestana. He downed the Cougars’ No. 4 man 6-1, 6-2. On Saturday Cowley claimed a 6-1 victory over No. 14 Drury. Garmendia blew past his opponent – Lukas Stierling – to win 6-1, 6-1. In doubles play, Garmendia and partner Castillo swept both matches.

Barton Community College’s Alexandra Abyasova led the charge for the Cougars this week. In their match against Cowley, Abyasova swept her matches. First in doubles, Abyasova and Hernandez defeated Cowley’s Hernandez/Kunakunova to give the Cougars the edge heading into singles. The freshman then outlasted Cowley’s No. 1 – Isid Hernandez – in a three-set battle. Abyasova has not dropped a singles match all season bringing her streak to six straight.