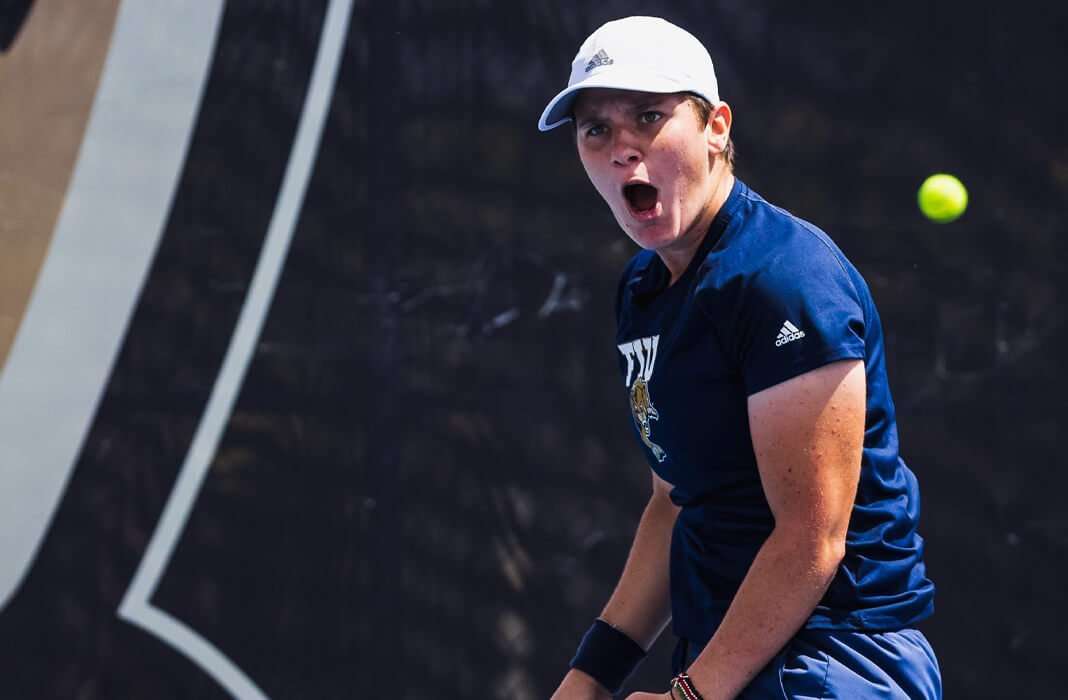 With all five divisions in college tennis back to competing, the UTR ITA Player of the Week awards were given out to 10 student-athletes – five men and five women – this week to celebrate their success. All of the recipients had an outstanding week of play and shined for their respective teams. Their success was reflected in the change in their UTR — which was as large as a 0.56 increase.

Wichita State’s Murkel Dellien led the charge for the Shockers this week against No. 28 Pepperdine and No. 48 SMU. The redshirt senior went undefeated in singles and doubles bringing his singles win streak to nine straight matches. Dellien and partner Frosa helped set the tone for Wichita State’s match with the Mustangs. They clinched the doubles point at the top of the lineup. Dellien would later put his team within one point of victory after downing SMU’s Chakravarthi in straight sets. During Sunday’s match with Pepperdine, Dellien clinched the match in a three-set battle with the Waves’ Oetzbach.

FIU’s Andjela Skrobonja sealed the victory for the Panthers’ first win over a ranked opponent this season. The win over No. 28 Rice is the highest for the program since 2010. The freshman first put her team up by clinching the doubles point alongside partner Umarova. Playing at No. 4 singles, Skrobonja faced Anna Bowtell. The match was a back-and-forth battle that saw Skrobonja narrowly miss a straight-set victory after dropping the second-set tiebreak. After falling behind 2-0 in the third set, Skrobonja rattled off six straight games to seal the victory for FIU. In addition to her heroics against Rice, Skrobonja blew past her USF doubles and singles opponents. South Florida’s Tiron was unable to handle Skrobonja falling in straight sets.

Valdosta State and Florian Simbozel faced heavy hitters in their recent matches with No. 1 Columbus State and No. 4 West Florida. Simbozel and partner Nguyen were the only Valdosta State doubles team to win their matches last week. The duo downed CSU’s power team of Cueto Ramos/Regalado and West Florida’s Bandeira/Nery. In Valdosta’s match with the Cougars, Simbozel tied the match at two-all after downing Garay in straight sets. Against West Florida, he would need three sets to defeat Lecoutre. Simbozel remains undefeated on the season in singles.

Barry’s Madeline Bosnjak strung together an undefeated week through the Bucs’ matches against Lynn and Saint Leo. The junior started her week off by clinching the match for Barry versus Lynn. Bosnjak battled Lynn’s Mordegan in the first set, but she came out on top. With the match momentum in her favor, she rolled to victory with a commanding 6-1 second set. On Friday, Bosnjak faced Saint Leo’s Vicens Maquel at the No. 2 spot. The two student-athletes split the first two sets forcing a tiebreak. Bosnjak edged out her opponent to tack on one final point for the Bucs. In both matches, Bosnjak and partner Khazan defeated their doubles opponents.

North Carolina Wesleyan’s Juan Vallejo added two more wins to his resume this week after solid wins against the top half of the Christopher Newport lineup. Playing at No. 1 doubles with former UTR ITA Player of the Week Jhonny Acosta, Vallejo secured the first doubles win for the Battling Bishops. Vallejo packed the last punch for NC Wesleyan. He downed CNU’s No. 2, Strause, in a third set tiebreak to close out the singles matches.

Averett’s Louise Hovhammar breezed past her opponents this week to go undefeated in singles and doubles. On Friday, Hovhammar and partner Crane set the Cougars up for success by defeating Lynchburg’s duo of Harris/Guill. In singles, Hovhammar faced Harris once again. The senior Cougar had no trouble defeating Harris and won in straight sets. The next day she followed up her success with an even more commanding performance. Hovhammar and Crane blanked Meredith College’s No. 1 doubles team. Hovhammar completed the sweep for the Cougars and defeated Henneberry in straight sets. Her singles win streak currently sits at seven straight.

Lindsey Wilson’s Steven Espinoza showed up big this week for the Blue Raiders. In a battle between two top 15 teams, Espinoza downed the Cumberlands’ Eric Banoub in straight sets to clinch the match for Lindsey Wilson. Earlier in the match, Espinoza and partner Almeida clinched the doubles point. The duo continued their hot streak against Campbellsville. They defeated Shimotsuji/Cullen to improve to 4-0 on the season. Espinoza faced Shimotsuji in singles where he won in straight sets. Espinoza currently holds a seven-match win streak in singles.

Montreat’s Stephanie Petit continued to show why she is ranked No. 1 in doubles and No. 2 in singles this week. Petit and partner Quiceno Ibarguen rolled past doubles pairs from Bluefield College, Union College Kentucky, and Tennessee Wesleyan. The duo only allowed one game – to Union’s Pajcin/Shoener – through three matches. Their record sits at 10-0. Petit was equally as impressive in singles play. Playing at the top of the lineup, she won all of her matches in straight sets. Her opponents only tallied 10 games collectively. Petit’s sole singles loss was to the No. 1 player in the country – Georgia Gwinnett’s Maria Genovese.

Eastern Florida State’s Ramiro Rincon helped the Titans to two solid wins against USC Sumter and The Citadel. On Friday, Rincon blanked the USC Sumter’s Laphitz. He also paired with Kmet to defeat Emmerson-hiini/San 8-2. Against the Citadel, Rincon and Kmet downed Graham/Shoemake at No. 1 doubles. Playing at No. 3 singles, Rincon defeated Quinn in straight sets.

Hillsborough’s Viktoryia Zhadzinskaya powered through the Hawks’ match with St. Petersburg on Friday. Playing at the top of the lineup in doubles, Zhadzinskaya and Langa dominated their match against Cherfus and McKenzie. The duo won 8-3 to tally a point for the Hawks. In singles, the freshman handled Garcia in straight sets. The victory brings her singles win streak to three straight.

Top Talent Look to Add Their Names to the History Books...