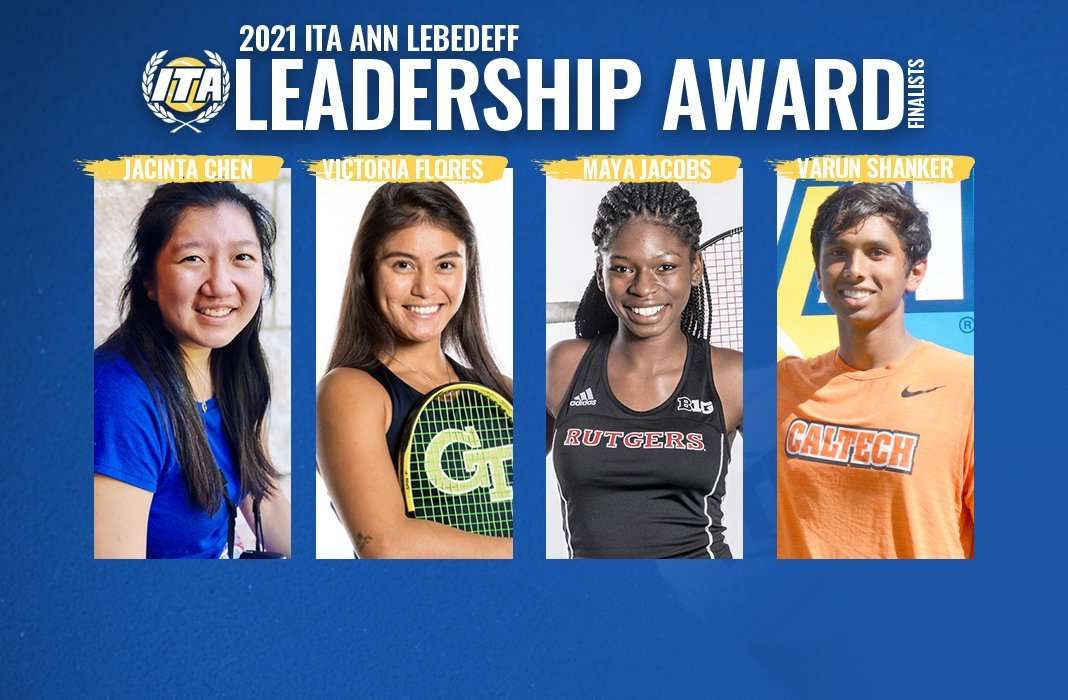 The ITA Ann Lebedeff Leadership Award endowed by Billie Jean King was created to honor a recent college graduate who played college tennis and demonstrated excellence on and off the court, leadership on his or her team as well as on his or her college campus and in his or her community. The recipient of the award will have demonstrated grit (i.e. passion and perseverance towards long-term goals), a commitment to social justice and equality and will have pushed others to be leaders in addition to demonstrating his or her own leadership.

The prestigious award is in its fourth year  – the previous winners were Daniel Park of Claremont-Mudd-Scripps (2020), Andrew “Drew” Akins of Duquesne (2019), and Nithya Kanagasegar of Case Western Reserve (2018).

“College tennis is, ultimately, about higher education,” remarked Dr. Timothy Russell, Chief Executive Officer of the ITA. “Our Association features one of the most robust awards programs in the world of college athletics,” he continued.  “College tennis continues to produce exceptional leaders and we are privileged to highlight the work of four exemplary student-athletes as this year’s finalists for this prestigious award.”

After reviewing the finalists’ materials – personal statement, resume, letters from their coach, teammate, and institution’s President – the ITA Ann Lebedeff Leadership Award Selection Panel will select the winner. In addition to the winner being awarded a post-graduate scholarship, the ITA will make a $1,000 donation to the award winner’s college tennis program.

Before she even stepped foot on campus, Jacinta Chen was part of the support system for the Pomona-Pitzer Sagehens. While in her senior year of high school, Chen would tune into the livestream of the Sagehens’ matches from Hong Kong. Since joining the team in Claremont, she has worked to create a family within the program and has pushed her teammates to take responsibility for improving their academic and athletic performance. As a second-year team captain, she has worked to prepare her teammates for leadership roles and ensure the Sagehens continue to recruit diverse and talented classes after she graduates. Outside of tennis, Chen has devoted her time to helping underrepresented and underserved communities. Whether she is serving as the secretary for the Claremont GenUN chapter, as a member of SAAC, or as one of two student representatives on Pomona’s Critical Thinking Committee — Chen is committed to elevating the voices of the underrepresented.

Without question Victoria Flores has made an impact on the Georgia Tech women’s tennis program. She is a two-time team captain, ITA All-American, and is currently ranked in the top 20 in singles and top five in doubles. Outside of her athletic accomplishments, Flores is committed to making  Georgia Tech and the Atlanta community more welcoming and inclusive for every race, gender, sexuality, and ability. In the summer of 2020, Flores founded the Racism and Prejudice Awareness group and conducted weekly Zoom meetings to discuss the racial injustice occurring in the country. Since the creation of the group, Flores has worked with the Georgia Tech Athletic Department to make diversity and empathy training a required class for every athletic program. Flores has also led the charge to create a Mental Health Committee within the Georgia Tech Athletic Department with the goal to provide mental health support for student-athletes. Finally, Flores devotes her time to the EXCEL program at Georgia Tech. She mentors intellectually and developmentally challenged students at the university — and as a result has created friendships that have deeply impacted her life.

In her four years with the Rutgers women’s tennis program, Maya Jacobs has been the heart of the team. Jacobs has served as team captain since her sophomore year and has exemplified servant leadership. She has adapted her leadership style to the team’s varying needs including leading a discussion about racial and social inequities this past season. Spurred by her passion for social justice, Jacobs became a leader on the Diversity and Inclusion committee in SAAC. She also was selected to sit on the Rutgers Athletics Racial Justice task force. Jacobs’ goal in everything she does is to make a positive impact in someone else’s life. She wants her legacy to be one of how she helped and supported others.

Noted as one of the best athletes to ever attend Caltech, Varun Shanker is an exceptional student and researcher at the extremely competitive university. Shanker has held many positions in leadership while at Caltech. He currently serves as the student-body president. Due to his successful leadership, his opinion is sought on decisions from the highest levels of Caltech on issues ranging from academic curriculum to pandemic reopening models and much more. His leadership extends beyond the president’s office. Shanker founded the Caltech Mentors program which pairs undergraduate students with local underserved teens to help prepare them for college. In addition to his work within the Pasadena community, Shanker was selected as the team captain – a role he has served in since his sophomore year.