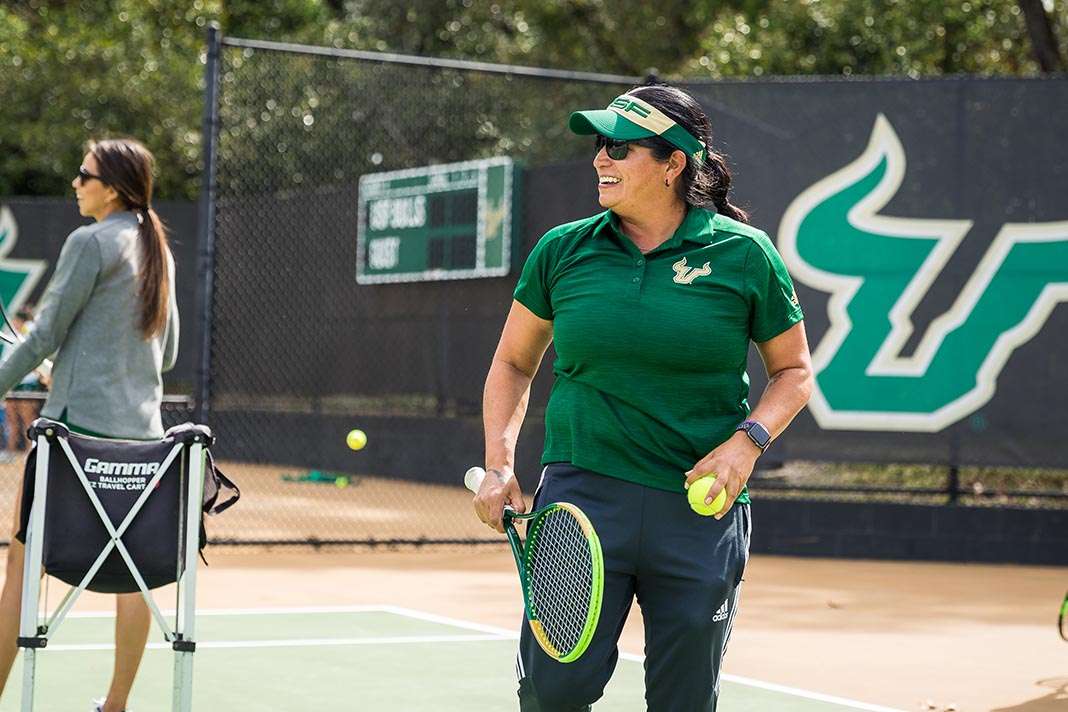 Last month during the NCAA Women’s Basketball Championship game, University of Arizona women’s basketball head coach Adia Barnes and her six-month old daughter stole the spotlight after Barnes returned from halftime a tad tardy because she was pumping breast milk for her daughter. Afterwards, Barnes took the opportunity to not only normalize, but also celebrate coaching moms.

The reality is there are coaches who are moms. It is possible for an individual to fulfill both roles and excel.

That’s not all there is to say about coaching moms, though. University of South Florida women’s tennis head coach – and fellow coaching mom – Cristina Moros would argue that building an athletic department that is inclusive and supportive of coaching moms is critical to the success of college athletics.

“If we are truly going to develop successful women in our athletes, these athletes need to see that being a mother is an option for them and you don’t necessarily have to choose one or the other if that is what they want,” Moros expressed. “This not only benefits all of our athletes, but members of the department as well.”

Moros’ son has been around college tennis since birth. She had him after her second season as an assistant at the University of Oklahoma and he has been a part of her programs ever since.

Raising her son as a single mom was a learning experience for Moros, but her time as a student-athlete at the University of Texas prepared her for motherhood by equipping her with time management skills, discipline, and grit.

That’s not to say Moros balances it all perfectly. She admits she sometimes has to make sacrifices when it comes to her son and her program.

“At certain points in the year there are times where I sacrifice certain things for the team over my son and then it is the opposite in other times of the year,” Moros explained. “Learning how to do that successfully is a challenge in itself and I know I don’t always get it right. My son is starting to get into competitive soccer. We had a match the day of his first tournament. After our match, I rushed to get there and I missed his first goal ever by about 5 minutes. I am still gutted about it, but that is just an example of what working moms face every day.”

Despite the challenges, Moros said raising her son around her program is incredibly special. In fact, some of her favorite baby photos of her son feature her players.

“My team is so great with my son and he really enjoys being the center of attention around a group of college age females!” Moros said. “He gets a preview of what it means to be a high-level athlete in college and the commitment that it takes to get there. He also learns that not winning everything is ok, and I truly believe it has helped him in his own life on how to deal with failure. Also, especially now, it is so important that both boys and girls see women as strong role models. I am proud that he continues to grow up seeing driven, accomplished females. He will grow up respecting women and seeing them in a certain way that would be much harder to teach if he wasn’t around the team.”

Moros’ son is not the only one benefiting from his time with the team. The mindset of the team is decidedly different due to his presence.

“He has this way of not only keeping me grounded, but also the team as well,” Moros explained. “I remember specifically one of my players saying this season that when she was playing, she would see him on the sideline and that in itself would just relax her during the match.”

“It has helped me define what success truly means to me,” Moros said. “That results are not just on paper, but when I witness an athlete of mine truly improve themselves from the start of their college career and to see how they are many years after is a big motivation for me as a coach. When handling situations, I always go back to my son. I think about if he was in a college program in this situation, how would I want him to be treated, how would I want this to be handled, and that helps me in how to best handle difficult situations that arise.”

For Moros, it is true that motherhood changes you. It changes what you value. It changes how you interact with others. It can even change how other people see you. The catch is – change can be good.