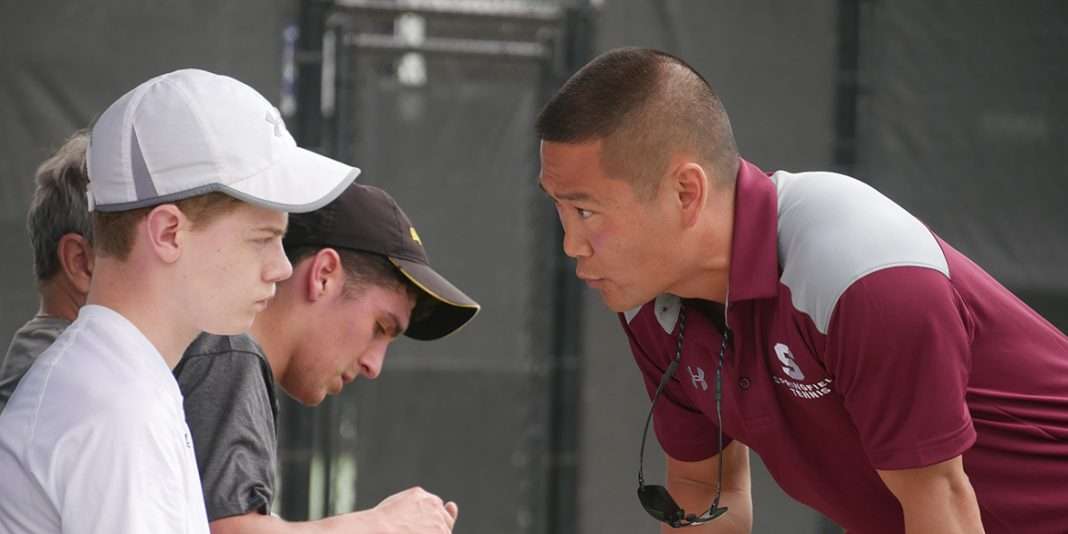 After four years as the head men’s tennis coach at UConn, Mike Louis received a warm welcome on his first day at Division III Springfield College—courtesy of the men’s lacrosse team.

As the Pride’s new men’s and women’s tennis coach headed to a meeting on campus, a group of lacrosse players recognized the New York City native and congratulated him on his new role, much to his surprise.

“It’s a different community here,” Louis said of the tight-knit athletic department on the Massachusetts campus, crediting the school’s athletic director and college president for creating that environment.

Louis joined the Pride in 2018, but nearly came on board in 2011, when he interviewed for and was offered what was then a part-time position as head coach. He instead accepted a full-time offer from the D-I University of Hartford, but walked away impressed with the setup at Springfield.

“There was something special about Springfield,” he reflected.

After a two-year stint as the men’s and women’s coach at Hartford, he returned to his alma mater, UConn, where he was a four-year student-athlete and a former assistant coach. In his head-coaching role, Louis guided two players to ITA men’s national singles rankings—a first in program history—and twice saw his team register the highest GPA in the school’s athletic department.

In his playing days at UConn, Louis was named to the Big East All-Academic Team on three occasions and served as team captain his senior year. A product of the New York Junior Tennis League (NYJTL), he was also named the New York Public School Athletic League (PSAL) Player of the Year as a senior at Humanities High School.

In 2018, as Louis and his wife began to start a family, the Springfield job opened as a full-time position, coupled with a position as an assistant professor of physical education. Three years later, it’s been a perfect fit.

As members of the New England Women’s and Men’s Athletic Conference (NEWMAC), the Pride played a limited season this spring. Louis’ women’s team closed out its NEWMAC slate with a 3-2 record, good enough for the No. 2 spot in the conference standings and a place in the conference championship match, against Babson on May 8.

“At the very least, we wanted to be able to provide the student-athletes with an opportunity to train and just be around each other, because that’s a huge part of their college experience,” Louis said of the modified season.

“Things have changed, but things haven’t changed. We’ve tried to keep the timing and the structure and the timeline the same just to keep the players in rhythm and routine.”

Of particular concern during these challenging times is the mental health of the team, with Louis allowing for more days off, recognizing the challenges his student-athletes are facing.

The college has also encouraged discussions about the recent social injustices across the country, with the recent spike in violence against Asian-Americans hitting close to home for Louis.

“The hard thing is, when you see those stories on the news—for me, I see potentially my parents, or the people that I love,” said Louis, whose parents live in New York City. “It does make it hard.”

Tennis can be a welcome distraction, but the worry remains. Despite this, he does his best to remain positive and hopeful, particularly in his interactions with his players.