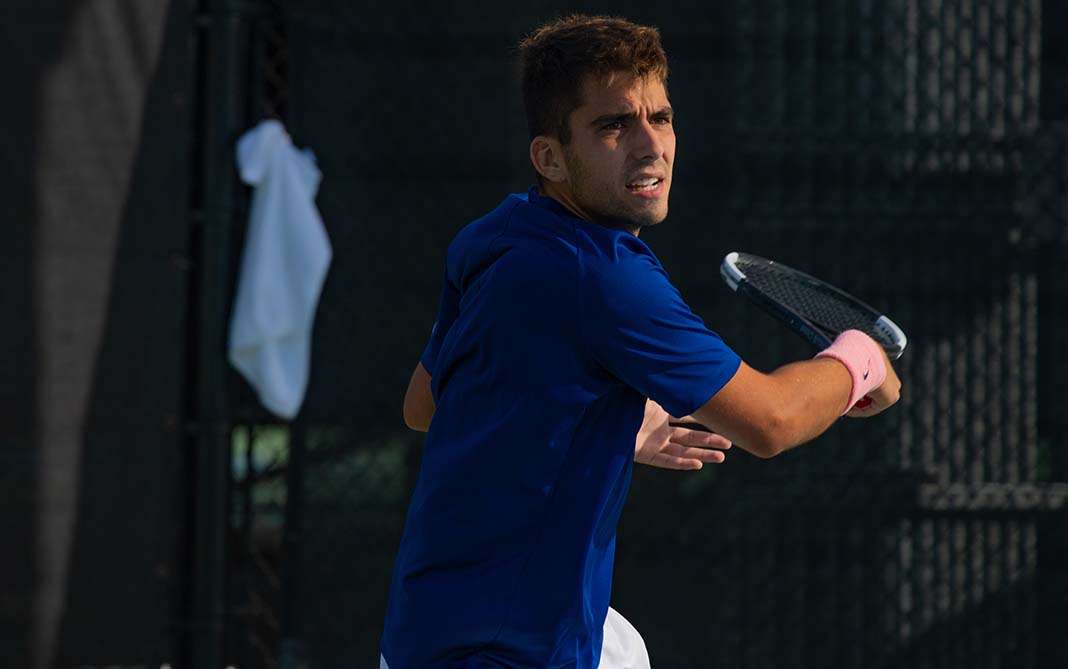 The two powerhouses last met in 2020 at the ITA National Team Indoor Championship finals. Columbus State walked away with a commanding 4-0 victory over Barry.

The Championship match will be played tomorrow at the Surprise Tennis Complex at 2 pm PT/5 pm ET. Live streaming and scoring will be provided.

Columbus State did not waste any time getting started in their semifinal match against Hawaii Hilo. CSU’s Regalado and Cueto Ramos powered past Soukal/Di Loreto to get the Cougars halfway to the doubles point. Teammates Steen and Garay officially put the Cougars on the board with their 6-3 victory at No. 2 doubles.

In singles, the momentum stayed with the Cougars. At the top of the lineup, Regalado continued to prove why he is the No. 2 ranked player in the country. He blew past No. 22 Soukal in straight sets to clinch the match for the Cougars. Coach Evans’ team received points two and three from Cueto Ramos and Martinetti. Both Cougars had dominating straight set victories over their opponents. Cueto Ramos’ 6-1, 6-1 victory brings his win streak to 17 straight. Martinetti defeated Hawaii Hilo’s Liu 6-2, 6-1 to put his teammate within one point of the championship.

Barry and Indy’s semifinal match was hard-fought, but the Bucs ultimately emerged victorious. The Bucs’ No. 1 tandem of Forcano and Gutierrez were able to put away Zeuch and Viel relatively easy, but the second doubles win would not come as easily for Barry. With Giuliato/Buettner locked in a battle with Lima/Withaus at No. 2, Garcia/Gallego edged out their opponents 7-5 to clinch the point for the Bucs.

In singles, the Bucs had a hot start. They took five of the six first sets — Indy’s Franca was the only Greyhound to win his first set. The Greyhounds started to turn things around in their second sets. Both Talimaa and Koenig won their second sets to force a tiebreak and keep their team’s hopes alive. Their efforts were not enough, though. Barry’s top half of the lineup was too much for Indy to handle. In order, No. 1-3 finished to send the Bucs to their fourth straight NCAA final. No. 1 Giuliato led the charge for Barry. He downed No. 26 Lima in straight sets to record the Bucs’ first singles point. At No. 2 singles, Palacios defeated Zeuch in straight sets after claiming the first-set tiebreak. The Bucs’ No. 3 man, Gallego, would seal the deal for his team. Indy’s Viel gave him almost all he could handle. Gallego won in straight sets after surviving tiebreaks in both to win 7-6 (4), 7-6 (1).

The 2021 NCAA Division II Women’s semifinal matches are set for Thursday, May 20th at 9 am PT/ 12 pm ET at the Surprise Tennis Complex.

The Bucs were the first to secure their spot in the semifinals. The No. 2 seed sped through their match with IUP. They went up early after taking the doubles point and did not look back after. The final three points came from the top half of Barry’s line-up. The No. 2 player in the nation, Deniz Khazan, got on the board first for the Bucs after allowing her opponent only one game. At No. 3 singles, Bosnjak was even more stingy. She shutout Loria to put the Bucs within one point of moving on. Senior Engelmann delivered the final blow defeating Mor 6-2, 6-0.

The Bronchos blew past the Hawks en route to the NCAA semifinals. UCO’s No. 3 doubles pair of Boyar and Buntrock set the tone for the match winning 6-1 and helping their team secure the doubles point. In singles, the Chos won all of their matches in straight sets. No. 7 Mae Canete powered her way to a 6-0, 6-2 win over Huerta, while No. 33 Dunlap and Boyar each won their matches 6-4, 6-2.

Despite the Rattlers’ best efforts, the Greyhounds remain undefeated and will face Columbus State tomorrow in the semifinals. Indy got the early lead — going up 2-0 after winning the doubles point and No. 1 Alekseeva taking her match. The Rattlers were not going to go easy, though. St. Mary’s senior Maria Garcia kickstarted the comeback for her team after downing No. 8 Novikova in straight sets. The Greyhounds answered Garcia’s victory with a victory of their own at No. 3. Next, Alice Thane edged out Sharonova in a tight second-set tiebreak to make it two for the Rattlers. Indy would have the last word, though. No. 46 Lagoda rallied after dropping her second set to clinch the match.

Columbus State edged out Hawaii Pacific 4-3 to secure their third straight trip to the NCAA semifinals. The last time the two programs faced each other was in the semifinals of the 2020 ITA National Team Indoors — that time HPU came out on top 4-3. Today, the Sharks got the advantage in doubles, but Columbus State responded in singles by building a 3-1 lead. HPU battled back into the match and tied it at 3-3 with wins from No. 17 Busson and Ballach. In the end, Sachs downed Miyahara after rallying from dropping the first set in a tiebreak.