ITA #WeAreCollegeTennis
Home College Tennis News DI Men From the Sweet 16 to the Elite 8: How the Men’s Teams... 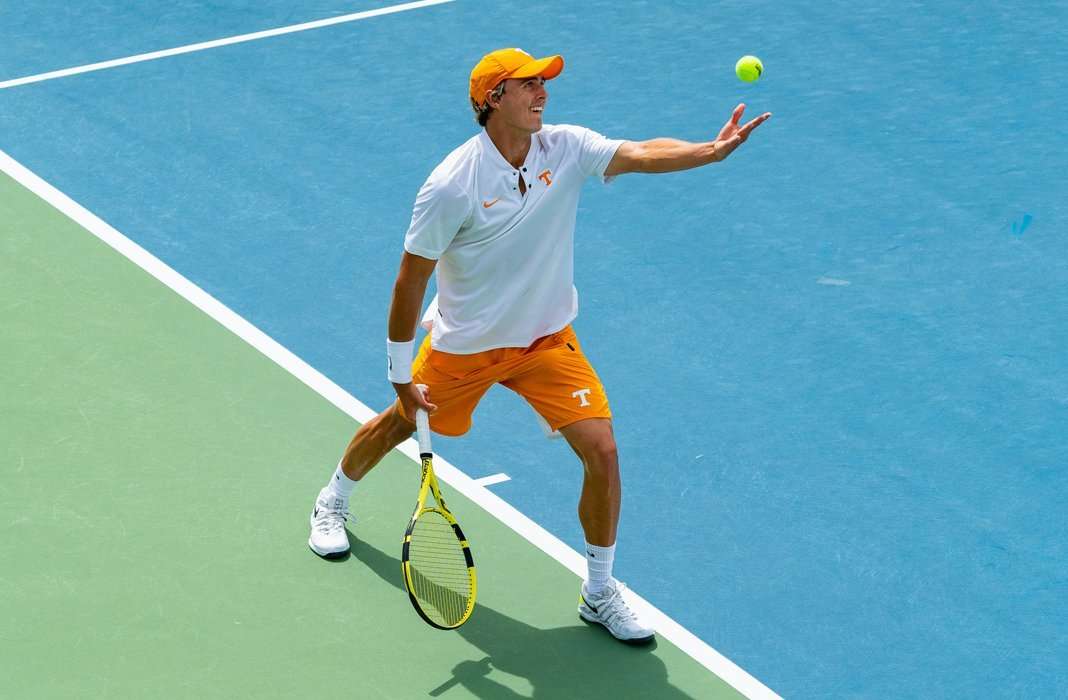 The DI Men’s Tennis Championship field is down to the last eight after Monday’s third round. Six of the top eight seeds are left, though No. 12 USC upset No. 5 Pepperdine and No. 11 Georgia beat No. 6 North Carolina to reach the quarterfinals.

Tennessee (27-3) vs. Georgia (17-6) | Thursday, May 20 at 11 a.m. ET
For the first time since 2013, the men of Tennessee are headed to the quarterfinals of the NCAA Division I Men’s Championship. After securing Tennessee secured the doubles point, and in dramatic fashion, senior Adam Walton clinched for the Vols in Monday’s match against Arizona in three sets. This was the fourth postseason clinch of Adam’s career. Now, in an SEC matchup, Tennessee will face Georgia for a spot in the semifinals.

“It means we are on the rise, I guess,” said Tennessee Head Coach Chris Woodruff on making the quarterfinals for the first time since 2013. “We will just go back and I’m glad we have those two days off and we will use those days. We are a working program; we will hit a lot of balls and stay on our routines.”

Nothing new for the Bulldogs of Georgia as they make their 32nd quarterfinal appearance. In upset fashion, (No. 11) Georgia was able to take down (No. 6) North Carolina in the Round of 16. The shining moment for Georgia came as graduate Billy Rowe at No. 5 singles. After taking his first set over UNC’s Josh Peck in a tiebreaker, Rowe was able to take a 4-2 lead. Peck, however, was not going down without a fight, holding serve at one point to make it 5-4 in the second set, with Georgia leading. Rowe responded, holding serve for the 7-6 (8-6), 6-4 win, and the Georgia clinch. This marked Rowe’s fourth clinch of the season against a ranked opponent.

“Tennessee is a great team,” Georgia Head Coach Manny Diaz said when asked what his team can expect from Tennessee on Thursday. “They beat us when we had two of our guys out of the lineup, but from then on, they’ve gone on a rampage and are playing tremendous tennis. They’re good at every spot. We have a big challenge like we did today, and it’s going to take our best, and that’s what we intend to put out there.”

TCU (19-7) vs. Baylor (32-4) | Thursday, May 20 at 2 p.m. ET
TCU men’s tennis advanced to the NCAA Elite Eight with a 4-1 victory over Ohio State on Monday afternoon at the USTA National Campus. TCU reaches the Elite Eight for the 11th time in program history and fourth time in the last six completed seasons. The Horned Frogs won the doubles point and claimed singles wins from Luc Fomba, Tomas Jirousek, and Tadeas Paroulek to earn the victory.

No. 1-ranked and second-seeded Baylor men’s tennis defeated No. 14-ranked and No. 15 seed Ole Miss 4-1 Monday afternoon. The Bears dominated the doubles point, then battled to scratch out three more points in singles with three matches going to decisive third sets. With the win, Baylor advances to the NCAA Quarterfinals for the second-consecutive postseason and 14th time in program history.

“I think we know each other better than any other team, maybe outside of Texas,” Baylor Head Coach Michael Woodson said. “We’re excited. I know how well they’re playing. They’re getting better every single match. They’re seasoned at this point of the year, so we know it’s going to be an absolute war. We’ll be ready for it.”

“It’s amazing, it’s exhilarating. It just makes me feel so happy because we’re just such a young team,” Texas Sophomore Evin McDonald said about clinching the match for the Longhorns. “I feel like everyone keeps counting us out. At this point, I can say we’re probably the ‘clutchest’ team because we’re 10-1 in 4-3 (matches) and we just gotta keep it going. We gotta use this as momentum and just go on to the next one.”

The No. 12 seed USC men’s tennis team scored a solid upset win over No. 5 seed Virginia with a 4-2 decision that sends the Trojans through to the NCAA Quarterfinals. The Trojans showed no fear, taking the doubles point and then a 2-0 lead in singles. Virginia fought back to tie it, only to see USC dig in and get a gutsy win from freshman Lodewijk Weststrate to set up clincher-extraordinaire Stefan Dostanic with the opportunity to come through in the clutch once again. The sophomore decided things with a three-set victory, improving USC’s overall record to 23-6 — most wins in a season for the Trojans since 2017.

“We are here to win this. These guys had a sour taste in their mouths from indoors, we lost three matches and they were all close, these guys want something to prove,” said Head Coach Bret Masi. “I was just happy to see our level today, it was ready for it. It was just one match though. We need to come out to play either a great Texas team or a great South Carolina team coming up on Thursday.”

“We got a lot of respect for that team,” Florida Head Coach Bryan Shelton said about the win over Illinois. “They are the grittiest team that we see outside of our conference. Brad Dancer, Marcos Asse, those guys coach those guys up, and they get better throughout the season. To win a Big Ten championship, when you’re going against Michigan, Ohio State, that says a lot. So those guys had a great season. For us to come out here tonight and have a comprehensive win like we did says a lot about our team, about the character of our guys, and just how hard we’ve worked as well.”

The eighth-ranked Texas A&M men’s tennis team advanced to the NCAA quarterfinals for the fourth time in program history as they posted a 4-0 win over No. 16 Mississippi State. The Aggies stormed through the doubles point to open up a 1-0 advantage over the Bulldogs, winning 6-3 on courts two and three. As play moved into singles, A&M maintained all of the momentum as they claimed first sets on all six courts.

“I think it was cool to do it in front of my friends and family, but honestly I am the most happy to do it for the seniors,” Texas A&M Junior Noah Schachter said about clinching the match for the Aggies in his home state. “We know that this is their last ever run it was really special. I know, Val [Vacherot], Hady [Habib] and Carlos [Aguilar] all want it really bad, and we’re really excited to go to Elite Eight.”

How to Watch, Keep Score, & More
The NCAA and USTA have partnered with the TennisONE app to broadcast selected matches via live stream. Fans are encouraged to download the TennisOne App, sign in, click on the NCAA Championships card at the top of the home screen, and scroll through the courts to find your match. Fans can also view this from their personal computer in mobile format, here. For more information about the 2021 NCAA Division I Men’s & Women’s Championship, broadcast and live stream coverage, and match times, follow us on social at ITA_Tennis (Twitter) and you can always check back here. Check out more from the USTA National Campus.

More Tickets Available Now
A limited number of tickets are available for purchase by the general public for the NCAA Division I Men’s and Women’s Tennis Championships at the USTA National Campus. The Campus is permitted to allow up to 50% fan seating capacity per the NCAA’s updated fan attendance policy for outdoor championships. Tickets are available for purchase here. Fans are encouraged to buy tickets early as the very limited number of tickets are expected to sell out quickly for many of the sessions.