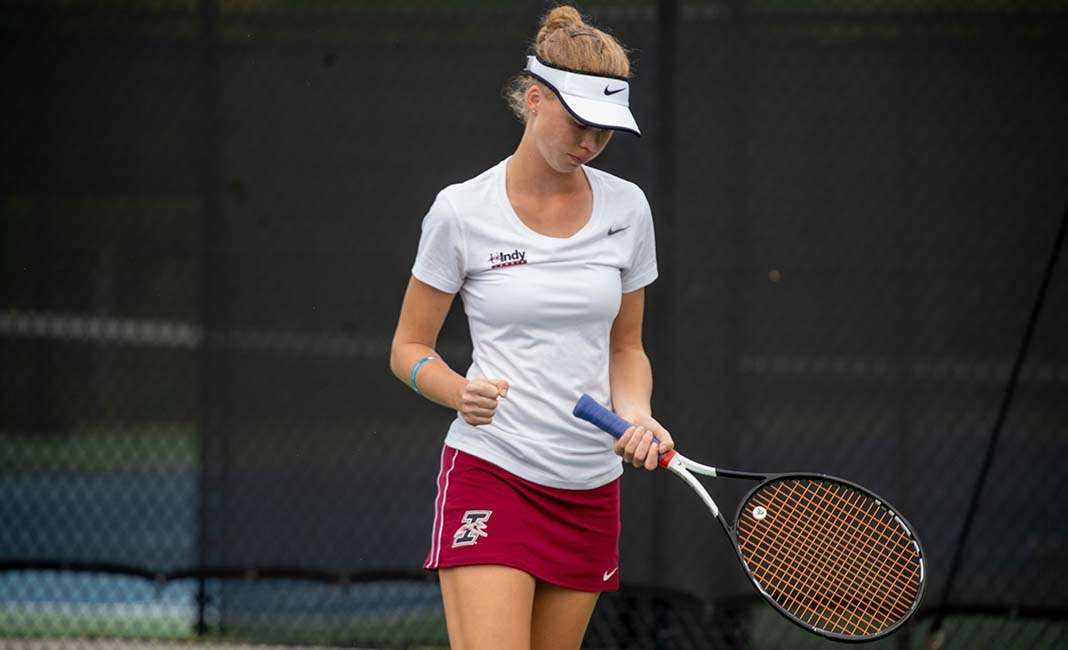 The University of Indianapolis Greyhounds and the Barry University Buccaneers have been at the top of the Oracle ITA Rankings most of the season. Both programs are undefeated and are loaded with talent. Tomorrow, they will face each other in the NCAA Division II Women’s Championship match at the Surprise Tennis Complex at 9 am PT/ 12 pm ET.

For Barry, the NCAA finals are familiar territory. They are looking to capture their fourth straight NCAA title. Indy, on the other hand, will compete for the first time in the finals.

The match will have live streaming and scoring for fans to follow along.

With their sights set on a possible fourth straight NCAA title, the Bucs came into their semifinal match with Central Oklahoma ready to play. The Bucs took the doubles point on the strength of their No. 1 and 2 doubles teams. Both tandems defeated their UCO opponents by the score of 6-3 and earned a ranked win in the process. No. 10 Khazan and Bosnjak downed No. 2 Abidullina and Dunlap, while Engelmann and Razafindranaly defeated No. 13 Canete and Landin. At No. 3 doubles, the Bronchos’ Boyar and Buntrock had the slight edge late in the match at 6-5 before the match was abandoned.

In singles, Barry continued to control the match. The Bucs took five of the six first sets with the bottom half of their lineup leading the way. At No. 6 singles, Daniela Farfan raced out to a big lead over Boyar and was the first Buc to get on the board in singles. She improved on her commanding 6-2 first set and only allowed one game in the second. There was a race between the Barry players to see who could claim points three and four — No. 1, No. 3, No. 4, and No. 5 singles were all closing in on a win. Ultimately. Xiyao Wang would put the Bucs within one point of victory with a straight-set victory at No. 4 and Khazan would seal the deal for the Bucs. She downed No. 5 Abidullina 6-3, 6-1 to send her team to the championship.

The Greyhounds had one goal in mind heading into their semifinal match with Columbus State — make their first NCAA final. They got off to a strong start in doubles thanks to their No. 1 and 2 duos. Alekseeva and Novikova – the top team in the country – powered through their match with Lopez and Sachs. Likewise, No. 3 Kislitskaya and Lagoda secured a win at No. 2 over Abrile and Concalves. Abrile and Concalves battled back through a deep deficit to pull within one of the Greyhounds, but was unable to complete the comeback.

In singles, the Greyhounds had the slight edge on the Cougars. They took four of the six first sets — Abrile and Labat took their first sets for Columbus State. At No. 4 singles, Abrile was hot. She finished first out of all student-athletes and posted a 6-1, 6-1 win over No. 46 Lagoda. With the match tied at one-all, No. 14 Kislitskaya and Solnyshkina got to work. Between the two of them, they allowed their opponents seven games total. Only needing one more point to advance to the finals, the Greyhounds’ eyes turned to the top of their lineup. No. 1 Alekseeva and No. 8 Novikova were both closing in on a win, but No. 36 Paya held off Novikova and forced a third set. Columbus State’s Lopez was unable to do the same and fell 6-2, 6-2 to Alekseeva.