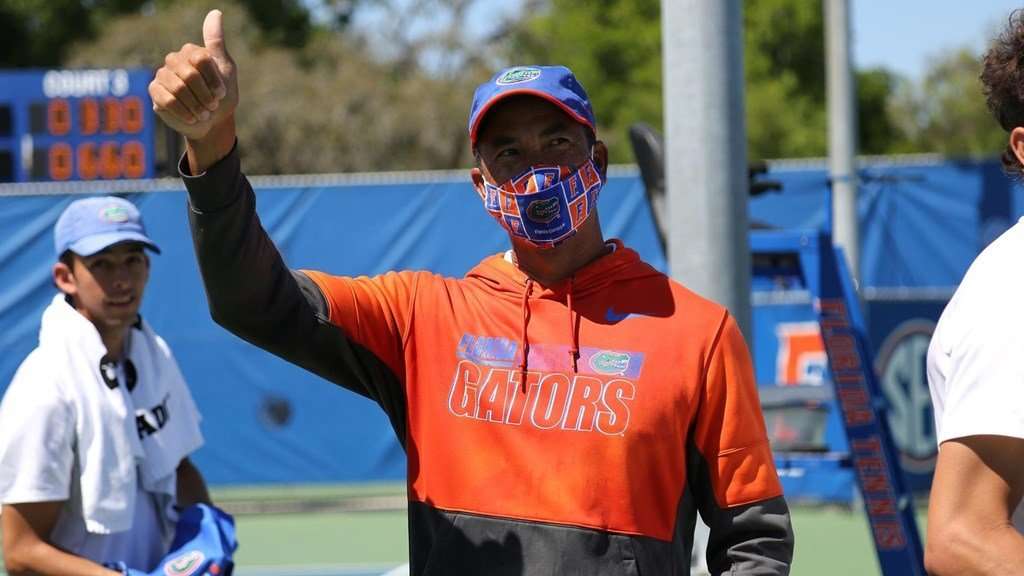 Rocky Top, you’ll always be…home sweet home to me!
The No. 3 Tennessee Volunteers reached the semifinals of the NCAA DI Men’s Tennis Championships, knocking off SEC foe No. 11 Georgia, 4-1.

Georgia took an early advantage, winning the doubles point, despite Tennessee winning at No. 1 doubles in a matchup of ITA Top 10 doubles teams in Tennessee’s Adam Walton and Pat Harper and Georgia’s Trent Bryde and Tyler Zink. Walton put Tennessee on the board, winning 6-4, 6-4, at No. 1 singles, and fellow Top 10 player Johannus Monday won on Court No. 2, 7-6(3), 6-4, to give Tennessee a 2-1 lead. Andrew Rogers won on the No. 6 courts to bring the Volunteers within one win of moving on and super senior Luca Widenmann sealed the deal with a 4-6, 6-2, 6-3 win at No. 4 singles to send Tennessee to the semifinals.

“It feels good. Manny [Diaz] and I, we go way back and this is really where he does his best work,” Tennessee Head Coach Chris Woodruff said about the win against fellow SEC team Georgia. “And I told the team that this is going to be a different Georgia team than when we played them there. You don’t win five or six national titles like he has without getting your guys good and relaxed, and I thought they did a great job of coming out in the doubles and getting out on top of us and swinging. This is a rival. It’s going to be like today. There are ebbs and flows. We’re just happy to advance and [be] moving on.”

Baylor won the doubles point, which came down to a tiebreaker on the No. 3 court, as Charlie Broom and Finn Bass prevailed 7-6(5). Baylor took command of the match, winning four of the opening six singles sets, led by Sven Lah who quickly wrapped up his match at No. 3 singles, winning 6-3, 6-1. TCU got on the board on Court No. 5 as Tadeas Paroulek cut the Baylor lead to 2-1, but the Bears’ Matias Soto defeated Luc Fomba 6-4, 6-4, in a battle of ITA Top 20 players to push the Baylor lead to 3-1. Spencer Furman clinched the win with a 7-5, 6-1 win on Court No. 6 to send the Bears to the semifinals.

“It was a battle out there,” Baylor Head Coach Michael Woodson said. “To have the excitement of it coming down to No. 3 doubles, saved a match point there at 5-6. To get ahead, and then have that 5-6 return, that first ball that Charlie hit was really impressive. I think it gave us a ton of momentum going into singles. We made it a point to focus on having great energy and looking like you’re
winning, regardless of what was happening. And I felt like that made a real big difference for our guys today.”

Longhorns Return to the Final Four
The No. 4 Texas Longhorns won another thrilling 4-3 match, this time knocking off the No. 12 USC Trojans to advance to the semifinals at the NCAA DI Men’s Tennis Championships.

Texas won the tightly-contested doubles point, prevailing 7-6(4) at No. 1 doubles to secure the early 1-0 lead. Micah Braswell put Texas ahead 2-0 with a 6-4, 6-3 win on Court No. 2, but USC’s Jake Sands got the Trojans on the board with a 6-4, 6-4 at No. 6 singles to cut the Texas lead to 2-1. Daniel Cukierman tied the match at 2-2, winning 6-4, 2-6, 6-1 at No. 1 singles for the Trojans, but Chih Chi Huang would quickly put Texas back ahead with a three-set win of his own on Court No. 5. USC’s Stefan Dostanic would tie the match at 3-3 but Texas sophomore Cleeve Harper earned a late service break and eventually closed out a 6-4, 3-6, 7-5 win to send the defending national champions back to the semifinals.

“When you’re in a 3-all match in the last eight, it’s a little nerve-wracking,” said Texas Sophomore Cleeve Harper about clinching the match. “My coaches always preach to me to trust myself and play aggressive. I just tried to play my game. It ended up working out for me. It’s an unbelievable feeling and it’s one I’ll remember forever.”

Right. Over. Left. = Gator Chomp
In another match that finished after midnight at the USTA National Campus, the No. 1 Florida Gators knocked off the No. 8 Texas A&M Aggies to advance to the semifinals at the NCAA DI Men’s Tennis Championships.

Texas A&M won the doubles point to take an early 1-0 lead over their SEC rivals, but Florida’s Ben Shelton, son of Head Coach Bryan Shelton, quickly evened the score at 1-1 with a 6-2, 7-5 win at No. 5 singles. Blaise Bicknell gave the Gators their first lead with a 6-3, 6-4 win on Court No. 4, and Sam Riffice earned a hard-fought, two-set win at No. 2 singles over Texas A&M’s Hady Habib in a battle of ITA Top 10 players to grow the Florida lead to 3-1. With three matches heading into a third set, Texas A&M had a glimpse of victory after going up a break on two courts but in another battle of ITA Top 10 players, Florida’s Duarte Vale outlasted Texas A&M’s Valentin Vacherot with a 6-7(5), 6-1, 6-2 win to send the Gators to the semifinals.

“I don’t know when you’re playing for your teammates, sometimes, for me, I can just go deeper,” Florida Senior Duarte Vale said about clinching the match. “When I’m in holes, losing that first set which was a tough one, and losing the doubles point, I look around and find inspiration in my teammates and coaches and it makes me look harder and try to keep digging and find a higher level and tonight I was able to find it.”

How to Watch, Keep Score, & More
The men’s semifinals will be available on the TennisONE app (2pm ET match) and via broadcast on the Tennis Channel (NB 7:30pm match). For more information about the 2021 NCAA Division I Men’s & Women’s Championship, broadcast and live stream coverage, and match times, follow us on social at ITA_Tennis (Twitter) and you can always check back here. Check out more from the USTA National Campus.

Tickets
A limited number of tickets are available for purchase by the general public for the NCAA Division I Men’s and Women’s Tennis Championships at the USTA National Campus. The Campus is permitted to allow up to 100% fan seating capacity. Tickets are available for purchase here. Fans are encouraged to buy tickets early as the very limited number of tickets are expected to sell out quickly for many of the sessions.