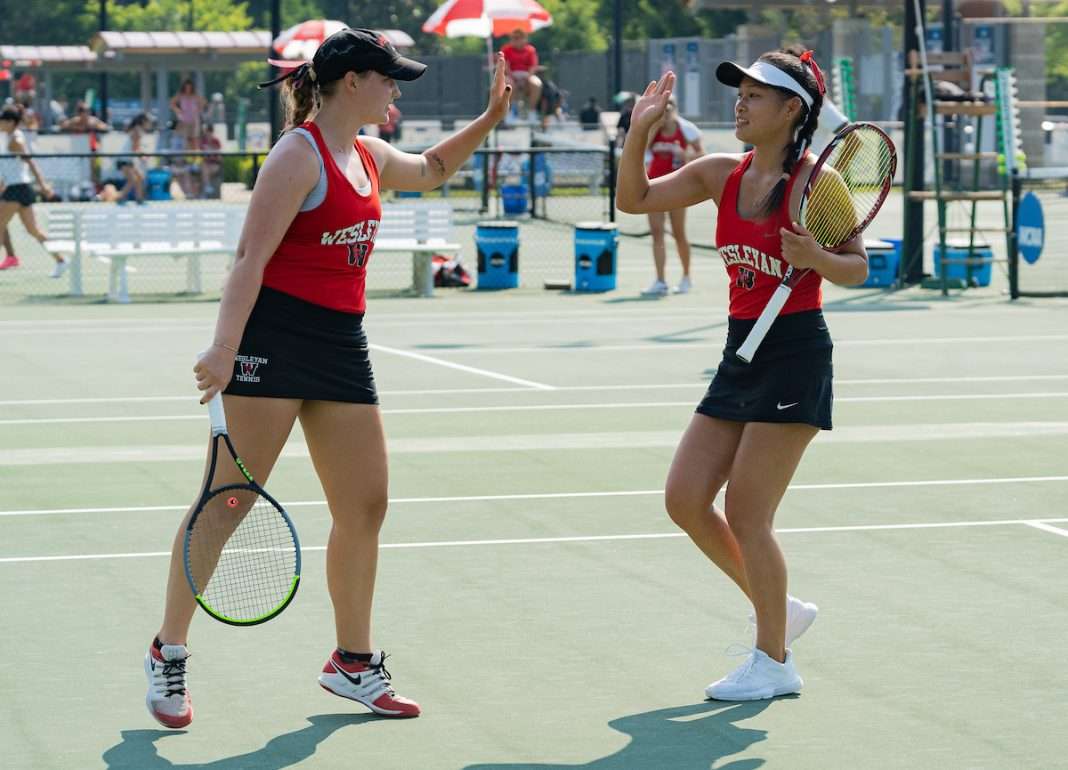 Wesleyan Ready to Defend National Title
The Cardinals are headed back to the NCAA title match after claiming the title in 2019. In another dominating competition, the No. 2 Wesleyan women’s tennis team defeated No. 12 Kenyon, 5-1, in a semifinal victory. With the win, the defending national champion Cardinals (10-0) advance to the NCAA title match for the second consecutive contested season. Wesleyan’s opponent is a familiar one in No. 3 Emory (9-3) as these two sides clashed in the 2019 NCAA Semifinals when the then-No. 4 ranked Wesleyan upset the then-No. 1 Eagles, 5-4, as the thrilling win catapulted Wesleyan to their first national title game in program history.

In what was just the second all-time meeting between the Cardinals and Ladies, Wesleyan jumped out to an early 2-1 lead after doubles play. The Cardinals then went on to win the first set in five of the six singles matches before ultimately earning the match-clinching point with wins at No. 4, No. 5, and No. 6 to get Wesleyan a ticket back to the NCAA Championship match.

The matchup between the Cardinals and Eagles shapes up to be a great one as the two highest-ranked teams whose institutions made the decision to play in 2021, will face off for the national title on Wednesday. Emory is one of the top women’s tennis programs in the nation as the Eagles advanced to their 12th consecutive Final Four this season and the 21st time overall in program history. The Eagles are seven-time NCAA National Champions, won their most recent title in 2016, and have played in the NCAA Championship match in eight of the last nine contested seasons.

Emory Eagles Look to Bring Powerful Team to Championship Match
For the first time since 2018 and the 14th time in program history, Emory University’s women’s tennis will play for a national championship as the Eagles defeated Tufts University, 5-2, in the national semifinals.

The win over the Jumbos sets up a national title matchup against defending national champions Wesleyan University. The Cardinals (10-0) knocked off Kenyon College, 5-1, in the other semifinal match on the day.

Stephanie Taylor provided the clinching point at third singles as she rallied for the 4-6, 7-6 (5), 6-2 win. Taylor trailed 5-4 in the second set before winning back-to-back points to move in front 6-5. Maddie Suk was able to force a tiebreaker and took a 2-0 lead in the tiebreak before Taylor won seven of the next 10 points to force a third set. With the third set tied at 2-2, Taylor claimed the next four games to seal the set and match win for the Eagles.

Taylor and doubles teammate Christina Watson opened Tuesday’s match with an 8-5 victory on court two. The following two doubles matches needed tiebreakers to decide a winner. Ysabel Gonzalez-Rico and Katie Chang gave Emory a 2-0 advantage as they won 8-7 (3) on court one, however, Tufts picked up the win at third doubles, knocking off Ana Cristina Perez and Lauren Yoon, 8-7 (2). Watson and Gonzalez-Rico pushed Emory’s lead to 4-1 as they were the first to finish singles matches on courts one and two. Watson was a 6-2, 6-1 winner at No. 2 singles with Gonzalez-Rico turning in a 6-3, 6-4 shortly after on court one. The Jumbos cut it to 4-2 as Defne Olcay was upended in straight sets at fifth singles, 6-1, 6-4, turning all attention to the three remaining matches on courts three, four, and six.

Perez was on the cusp of forcing a third set when the match was halted, bouncing back to lead 6-5 in the second after dropping set one 7-5. At sixth singles, Jessica Fatemi won her first set 6-3 before falling in set two 6-3 and was trailing 3-1 in the third when play was stopped.

How to watch, keep score, & follow along
Fans can follow the championship match tomorrow with live stats and video which can be found here. For more information about the 2021 NCAA Division III Men’s & Women’s Championship, broadcast coverage, and match times, follow us on social at ITA_Tennis (Twitter).

Emory and Chicago to Meet In 2022 ITA DIII Women’s National...