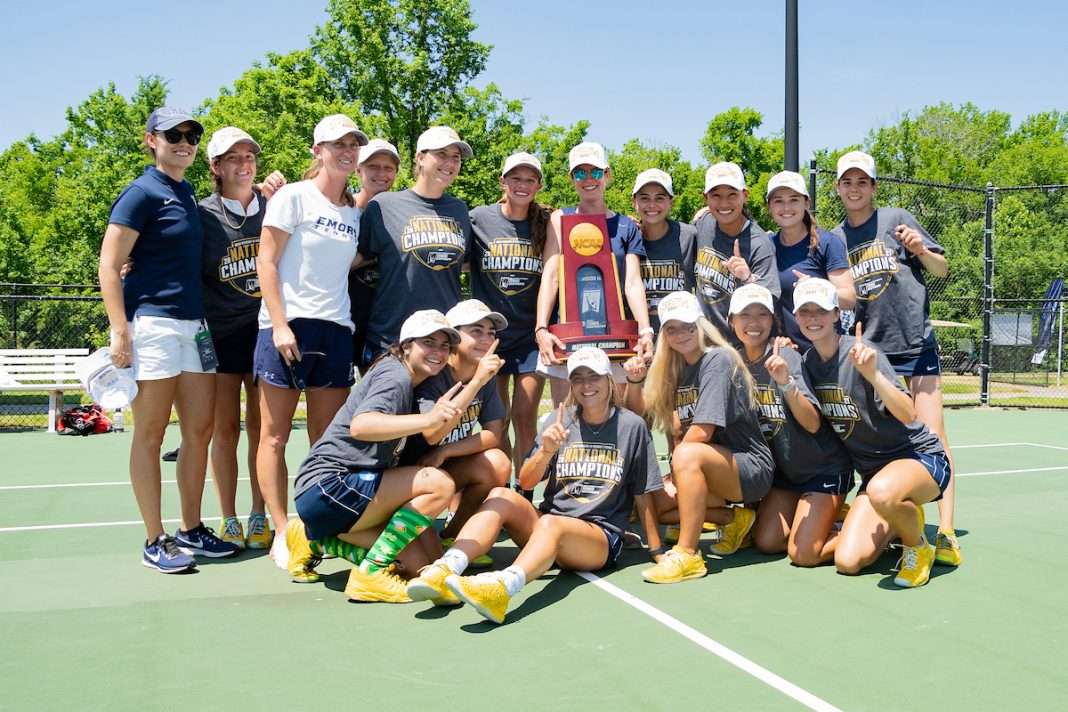 Emory Women’s Tennis Defeats Wesleyan, 5-0
For the first time since 2016 and for the eighth time in program history, the Emory University women’s tennis team has been crowned the NCAA Division III national champions!!

The Eagles thoroughly dominated from start to finish Wednesday’s championship match, defeating the reigning national champions Wesleyan University by the count of 5-0. The match lasted just over the two-hour mark.

Senior Ysabel Gonzalez-Rico and junior Jessica Fatemi clinched the match moments apart on courts one and six with straight-set victories. Gonzalez-Rico was the first the finish as she dropped one game total with her 6-1, 6-0 win over Venia Yeung. Minutes later, Fatemi closed out her clinching win over Caitlin Goldberg, winning 6-0, 6-2.

The singles victories followed an Emory doubles sweep that took only 50 minutes to complete. Gonzalez-Rico and teammate Katie Chang quickly posted an 8-1 win on court one before Ana Cristina Perez and Lauren Yoon finished off an 8-4 win on court three. Christina Watson and Stephanie Taylor completed the trifecta as they were 8-2 winners at the second doubles position.

At the conclusion of the match, the Eagles held leads in three of the four remaining singles matches with Watson in front 6-1, 2-3 on court two, Taylor leading 6-4, 1-2 on court three and Perez 6-4, 2-0 on court four.

Emory women’s tennis closes out a year like no other with a 10-3 overall record while the loss was the first for the Cardinals as they finish 10-1.

Emory Men’s Tennis Defeats Case Western, 5-2
The Emory men’s tennis team captured the program’s sixth-ever national title on Wednesday, defeating fellow University Athletic Association member Case Western Reserve in the finals of the NCAA D-III Championships. The Eagles won their fifth straight match and closed out their season at 10-3 following a hard-fought 5-2 victory over the Spartans who finished at 14-3.

Emory got on the board first when the No. 1 doubles team of Hayden Cassone and Antonio Mora, playing together for the first time since May 2, crafted an 8-2 decision against Neil Mabee and Jonathan Powell.  The Eagles pushed their lead to 2-0 after the No. 2 tandem of Andrew Esses and Will Wanner posted an 8-4 triumph over Chaitanya Aduru and Anthony Kanam, closing out their season with a 6-0 won-lost slate.  The final doubles point was recorded by Case with the No. 3 team of James Hopper and Vishwa Aduru prevailing over Sahil Raina and Nolan Shah.

Esses captured the decision of the first singles point at the No. 3 spot with his 6-3, 6-0 verdict over Matthew Chen staking Emory to a 3-1 advantage.  The Spartans then narrowed the Eagles’ lead to 3-2 after Hopper topped Cassone at first singles, 6-0, 6-3.  Wanner continued his strong postseason play and in the process gave the Eagles a 4-2 margin when he manufactured a 6-0, 6-4 outcome over Chaitanya Anduru at No. 4, upping his record to 7-4.  Needing one more point to seal the outcome, all eyes were focused on No. 2 singles where Mora and Vishwa Aduru were waging a battle of attrition, No. 5 singles where Emory’s Mark Sverdlov was battling Powell, and the No. 6 singles matchup between the Eagles’ Shah and CWRU’s Kanam. Both Mora’s and Sverdlov’s matches went to a third set with Mora up 5-4 and looking to break Aduru for the deciding point while Sverdlov faced a 3-4 deficit in the final set.  Eventually, it was freshman Nolan Shah who accounted for the memorable point with his 6-3, 6-4 triumph.