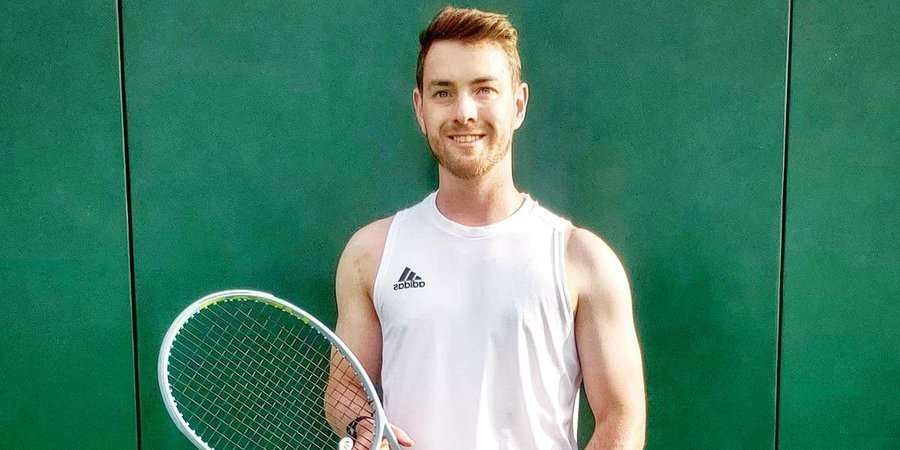 This feature is written by Scott Strough, in his words, courtesy of Outsports.com

The name was not entirely off base, as I was always making sure people were where they needed to be, cleaning up the courts, and helping the coach with whatever help he might require. However, If I was Mother Hen when they assumed me to be a straight man, what was in store for me if I were to share that I was gay?

When I entered the world of college tennis, I was still in the closet about who I truly, or at least fully, was. I would show up to practice, always the shy and quiet one on the team. Looking back on it now, this was largely because I tried to attract as little attention to myself as possible.

My college team’s dynamic was not the most inviting to someone in the closet. Almost every teammate I had in college was in a fraternity, including myself, and the macho and masculine vibes one associates with “frats” were strong within the majority of my fellow players. I was already teased for my caring and quiet disposition, so why risk the compounding of that by coming out to them?

Sports were always a part of my life growing up in Fulton, Missouri. Tennis became my passion when I tried the sport out for the first time on the opening day of high school practice my freshman year. Before I finished my first season of tennis, I knew that the sport was going to shape the future trajectory of my life.

However, there was another piece of me that deep down I knew was going to play just as big a role. Unfortunately, I believed that being gay was not going to impact my life positively but rather would limit me to being unhappy and largely alone all my life.

I did not come out to my high school teams. The fear of how my teammates and my best friends would react was greater than my desire to unveil that part of who I was. I grew up an athlete, but also a country boy, outdoorsman, and an academic who was respected in the classroom, and on the cusp of being one of the “cool kids” in my school and my town.

My reputation was more valuable than sharing a part of me that I had managed to successfully keep tucked away. My high school years were still a time when the word “fag” was tossed around the locker room when being gay was equated with being meek and weak. No true athlete could be gay, or at least that was the perception we all lived under.

I ended up playing NCAA Division III tennis at Westminster, a small private school in Fulton, Missouri. The passion I felt for the game of tennis burned even brighter than ever. At this point in my life, it was my career ambition to, one day, coach tennis at a professional level. I lived and breathed tennis.

As I mentioned earlier, I still had not desire to come out as gay my freshman year on the team. That changed the beginning of my sophomore year, however, and I felt the urge to come out and to stop hiding such a large part of who I was. I had developed a close friendship with a teammate, Kyle, who would later become my trusted doubles partner and a life-long friend.

I shared my secret with him one night and told him I was gay. It was such a relief that all I could do was cry. He thought for a minute and said, “Scott, I do not fully understand, but know that you are my best friend and I am going to still love you as my best friend. Thank you for trusting me enough to tell me.”

After I initially came out, it became much easier for me to tell other close college friends. There were four of us on the team who were in the same fraternity as me. By the end of my sophomore year, all four of these teammates knew. That was enough for me.

I was never the loud and boisterous one in the group and instead was quiet, reserved, and tried to stay out of the spotlight. While I was officially out to a large number of teammates, I never made any kind of official announcement that the rest of my team or coach would see for a while.

Tennis was my sanctuary. I did not want to take that sanctuary away by making a big deal of coming out. I thought that tennis should be the focus of my practices, not me being gay. There were still teammates who would use the word “fag” or “gay” in their conversations with each other, always in derogatory ways. The teammates who knew I was gay would always give me a glance to see if I heard the remarks and, if so, how I would react.

Regrettably, I would not react, respond or correct this type of behavior. I felt that if I took a stand against this kind of language I would be seen as the only openly gay athlete in my college of 1,200 students. That was a big ask for a small-town boy who used sports as his escape from the stress of the real world.

However, as some of the players who were two or three years ahead of me began to graduate and I became one of the senior teammates and mentor figures on the team in the 2016-17 school year I began making social media posts that hinted at the fact I was indeed gay.

Eventually, I knew that my whole team was aware. I expected to be teased by a few teammates or to get the awkward silences or attitudes when deciding who would bunk with who in the hotel rooms. Surprisingly, this is not what resulted.

The derogatory comments died off, the awkward moments occurring from close contact in a tightly packed team van and choosing hotel rooms never happened and the loss of respect as an athlete never came to fruition.

Over time, because of the lack of negativity, I noticed that I started to be more confident. I became more vocal on the team, assumed even more leadership responsibilities, and began to enjoy our team dynamic all the more.

My newfound confidence blossomed. After graduating college, it led me to my dream job — coaching tennis professionally at a higher level than I would have thought possible for myself.

In my coaching role, I was now able to truly be myself to those I worked with and those I helped coach. While I still am not the type of person who proclaims that I am gay (simply because it is not my personality), I did have the confidence to proudly talk about my partner at the time and to discuss more intimate details about my social life with members and staff at my tennis club.

Being out, and being more confident in who I was as a whole person, has allowed me to truly find a community within the game of tennis. A community that I can feel has my back, has interest in my life and my continuing story and that gives me a sense of belonging.

In high school, I never would have dreamed that I could compete and then coach professionally on the court next to world-ranked professional tennis players, live the game of tennis and be respected for it while being an openly gay man. I had no athlete role models after all, especially not in the sport of tennis.

Because of the lack of LGBTQ role models or mentors at my high school or college, it took me a long time to build the confidence to step out into the world as a gay athlete. In hindsight, had I not stepped out, who knows what my life trajectory would have been? I may not have had the confidence to land a coaching position where I was fortunate enough to give lessons next to Jack Sock (as high as No. 8 in the world at the time), or been fortunate enough to become a part of a tennis community that makes me feel like I belong somewhere in the world.

Coming out is a scary thing, especially in the world of sports and athletics. However, as more of us step out and share our whole selves with our teammates, our friends and our communities, the easier it will become for those who are struggling to take the step for fear of possible negative consequences, whatever those might be.

Sport is a platform. It is a platform for self-expression, team building, character development, and community stabilization. For this reason, sports should be representative of the diversity in our communities.

The accurate representation of sports is only possible if we are willing, wanting, and able to accurately portray who we are as athletes and as people. If you know who you are internally (gay, bi, lesbian, trans, pansexual, etc.), be that person without apology. Not only be that person but use the platform of sports and athletics to show the world, your community, your teammates and yourself, that there is no opponent you are not willing to challenge and overcome in the game of life.

Scott Strough, 26, graduated from Westminster College in Missouri in 2017. He served as the tennis team captain and coach’s assistant his senior year. He has gone on to coach professionally in the Kansas City, Missouri, area.