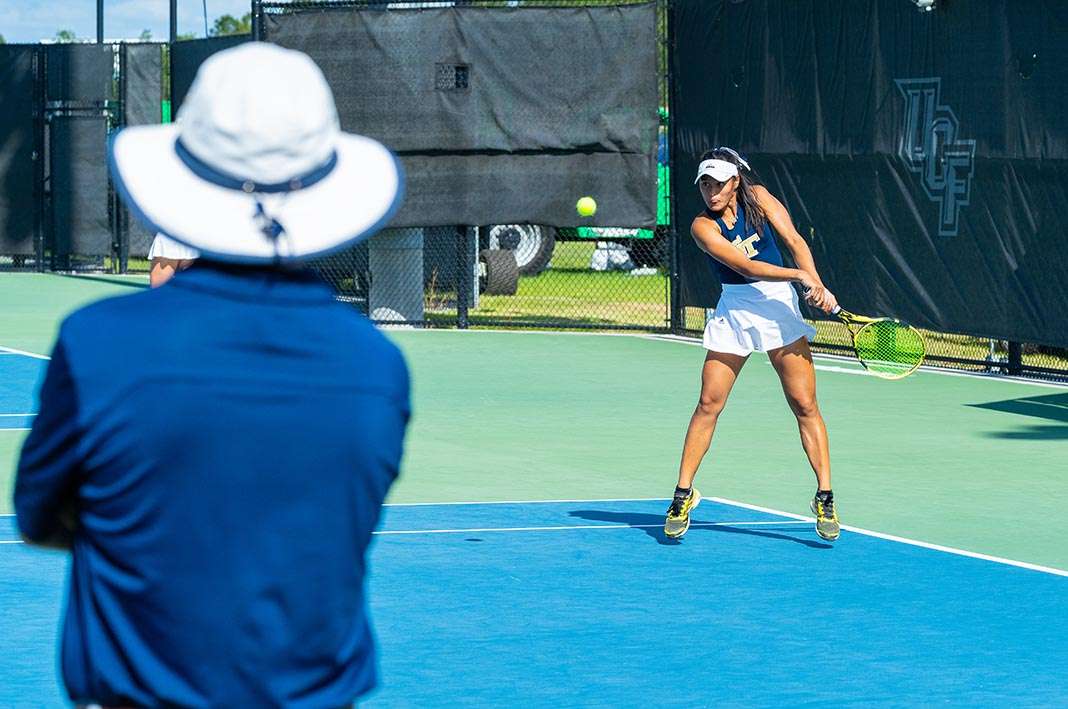 “An important part of the ITA’s annual work centers on our awards program, one of the most robust in all of college sports,” ITA CEO Dr. Timothy Russell said. “The ITA Ann Lebedeff Award endowed by Billie Jean King pays tribute to a student leader who serves on campus and in the community in different and important ways. It is challenging enough to play varsity tennis at the highest level of our sport. To also serve as Victoria Flores has is simply remarkable.”

“I am blessed and truly honored to receive this award while representing Georgia Tech Athletics and our women’s tennis team,” Victoria Flores said. “Receiving this award means so much to me because it sheds light on the various activities I was involved in during college that I was so passionate about. Hopefully, I can encourage other college athletes to utilize their current platform and make a difference where they can.”

Victoria’s impact on the Georgia Tech and Atlanta community goes far beyond her exemplary play on the tennis court. In all aspects of her life, the Iowa native looks to advocate for the underrepresented and excluded. That mindset is tied to her life experiences and the people she has encountered.

Her mother and father were born in the Philippines and immigrated to the United States, so her father could practice physical therapy. While having grown up in Fort Dodge, Iowa, Victoria is still extremely connected to her Filipino culture.

Over the past year, the United States has seen a dramatic rise in anti-Asian hate crimes. To create a sense of community and safety, this year Victoria joined with other Asian and Filipino students at Georgia Tech to create the university’s first Filipino Student Association.

That’s how it typically happens when Victoria sees groups of individuals hurting. She gathers others and together they take action.

Last summer, Victoria set her sights on creating department-wide change in the Georgia Tech athletic department. As an active member of Georgia Tech’s Student-Athlete Advisory Council, she formed the Racism and Prejudice Awareness Group in response to protests and calls for reform that swept the country last summer after George Floyd was murdered.

What started out as Victoria hosting weekly department-wide Zoom meetings to discuss the social and racial injustices occurring in the United States is now a required part of every Georgia Tech student-athletes onboarding process. Due to her efforts, all Georgia Tech athletic programs will now have to go through diversity and empathy training.

“She has shown time and again a commitment to serving others, speaking out when needed on issues like social justice and equality, and always thinking of ways to make a positive difference in the lives of others,” Georgia Tech President Angel Cabrera said.

Her focus is not solely on creating change within the Georgia Tech Athletic Department, though. Victoria became a mentor in the Excel program during her junior year. The four-year college program is focused on providing students with intellectual and developmental disabilities opportunities to develop socially, explore career options, and transition to independent living. Through the program, she spends time with and guides the students as they navigate their college experience.

“The driving force behind my passion to serve others and advocate for equality in all aspects of life is simple,” Flores explained. “The more you give with pure intent, the more you receive. Other than when I’m playing tennis, I am most fulfilled with joy when I can help others in any way.“

The death of one of her best friends, Georgia Tech football player Brandon Adams, was a catalyst for Victoria. Through her struggles with depression, she found a purpose that was greater than being a tennis player.

In 2019, she created a clothing drive in Brandon’s honor to support homeless shelters in the Atlanta area. Additionally, she formed the first-ever Mental Health Committee in Athletics’ history to bring awareness and support to the struggles so many of her fellow student-athletes were battling.

Throughout all of her activities – whether it be leading the Yellow Jackets to a top 10 finish in the Oracle ITA Rankings or advocating for increased support for LGBTQ and BIPOC students – Victoria believes that anything can be accomplished if it is done with love.

The ITA Ann Lebedeff Leadership Award endowed by Billie Jean King was created to honor a recent college graduate who played college tennis and demonstrated excellence on and off the court, leadership on his or her team as well as on his or her college campus and in his or her community. The recipient of the award will have demonstrated grit (i.e. passion and perseverance towards long-term goals), a commitment to social justice and equality, and will have pushed others to be leaders in addition to demonstrating his or her own leadership.

Flores is the fourth recipient of the award. She joins Daniel Park of Claremont-Mudd-Scripps (2020), Andrew Akins of Duquesne (2019), and Nithya Kanagasegar of Case Western Reserve (2018) as winners of the award.