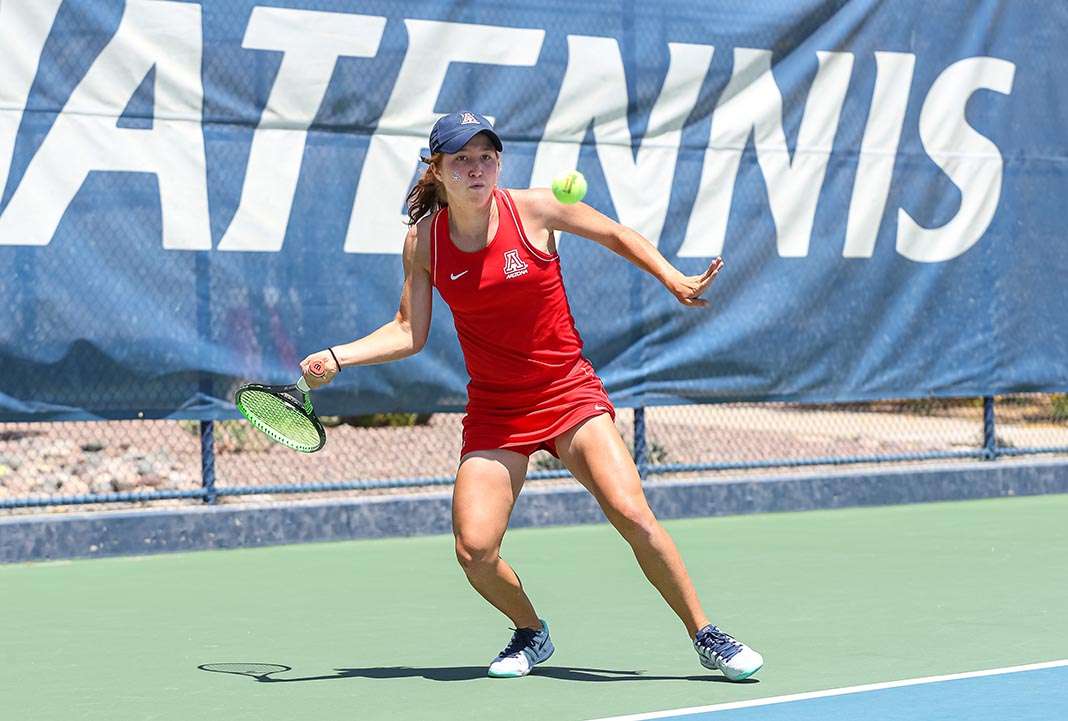 We’ve rounded up the highlights of week two below — check it out!

Coming off her win at the Virginia Tech event last weekend, Wilkins clinched the title at the Wake Forest event Monday morning. Through the first two weeks of the Circuit, Wilkins has won 60% of her matches in straight sets. In Winston-Salem this weekend, Wilkins got off to a quick start and downed her first two opponents in straight sets, but was tested in the quarterfinals by Auburn’s Yu Chen. Chen extended the match to a third-set tiebreak after taking the second set in a tiebreak. Ultimately, Wilkins overcame Chen and moved on to defeat her final two opponents in straight sets. Across the two tournaments, the average UTR of her opponents was 9.07.

In Maryland, it was a similar story for Michigan rising junior Nicole Hammond. Hammond has won back-to-back titles at the Stevenson tournament and the JTCC tournament. Like Wilkins, Hammond has also won 60% of her matches in straight sets. Additionally, 30% of Hammond’s opponents were college student-athletes as well. In the championship match of the JTCC tournament, Hammond faced Princeton’s Neha Velaga. After splitting the first two sets, Hammond edged out Velaga in a close tiebreaker. Through the first two weeks of the Summer Circuit, Hammond has proved herself to be a tough competitor in high-pressure tiebreak situations. Half of her matches have included a tiebreak and Hammond has won every single one.

Of the 18 flight one singles champions crowned this weekend, Northwestern’s Steven Forman and Pepperdine’s Savannah Broadus were the players with the highest UTR.

The Wildcats’ top guy ended the weekend of competition with a 13.29 UTR. He went through a gauntlet of three collegiate players and one junior to reach the finals of the Michigan State event. His closest match was against his teammate Saiprakash Goli in the quarterfinals. After Goli forced a third-set tiebreak, Forman held strong and quickly won the match 6-3, 6-7 (6), 1-0 (2). In the finals, Forman once again faced a teammate in Natan Spear; however, Spear withdrew from the event leaving the title to Forman.

Incoming Pepperdine freshman Savannah Broadus finished the weekend with a 10.87 UTR and her second overall ITA Tour title. Broadus did not have any difficulty winning the Hardin-Simmons tournament this weekend. She won all of her matches in straight sets and only allowed her opponents 10 games total. Three of her four opponents were collegiate players. In the finals, Broadus downed Wofford’s Brianna Wilbur 6-4, 6-1.

Represent for the Division

Denison rising sophomore Andy Mackler claimed the men’s singles title at the Oberlin tournament — his first-ever title from the ITA Tour. Mackler powered through the tournament this weekend and defeated all four of his opponents in straight sets. To clinch the title, Mackler had to down his teammate Colin Gramley in the semifinals and then Division I student-athlete Shamirul Shahril Mohd Adam of Southern Mississippi in the finals.

At the Lifetime Fitness tournament in Oklahoma, two-time ITA Division III Singles All-American Nina Mitrofanova was in her element. Southwestern’s Mitrofanova advanced to the finals with little trouble after winning her first three matches in straight sets — including the semifinal match against Division II Newman University rising sophomore Amber Hands. During the Sunday afternoon championship, Mitrofanova had no answer in the first set for junior Axelle Jacquemin. After being shut out in the first, Mitrofanova scratched her way back into the match and won in a tight third-set tiebreak.

Juniors Emerge from the Pack

At the Whittier tournament, juniors Marcus Sebastian and Olivia Center took home the trophies. Five-star recruit Center had a challenging opening match against fellow junior Kaytlin Taylor that went to a third-set tiebreak, but hit her stride through the rest of the tournament. She won her final four matches in straight sets — including her matchup against Pomona-Pitzer’s Nina Ye. On the men’s side, Sebastian was on the grind all weekend for the title. Four of his five matches were decided in a third-set tiebreak. The five-star recruit came back in the finals to win a thrilling three-setter over Diogo Tinoco. Previously, Tinoco won the Week One Chapman Summer Circuit event.

Down in the desert, four-star recruit Tanvi Narendran won a thrilling match over Gonzaga rising junior Catherine Broerman. Leading up to her match with Broerman, the Tucson native was not challenged and won all of her matches in straight sets. On Monday morning, Narendran started strong and took the first set against Broerman. Broerman was able to keep her hopes alive and force a third after taking the second set in a tiebreak. The two battled in the third set, but ultimately, Narendran won 6-4, 6-7 (3), and 1-0 (12).

Check out the rest of the results from Week Two of the ITA Tour: Summer Circuit