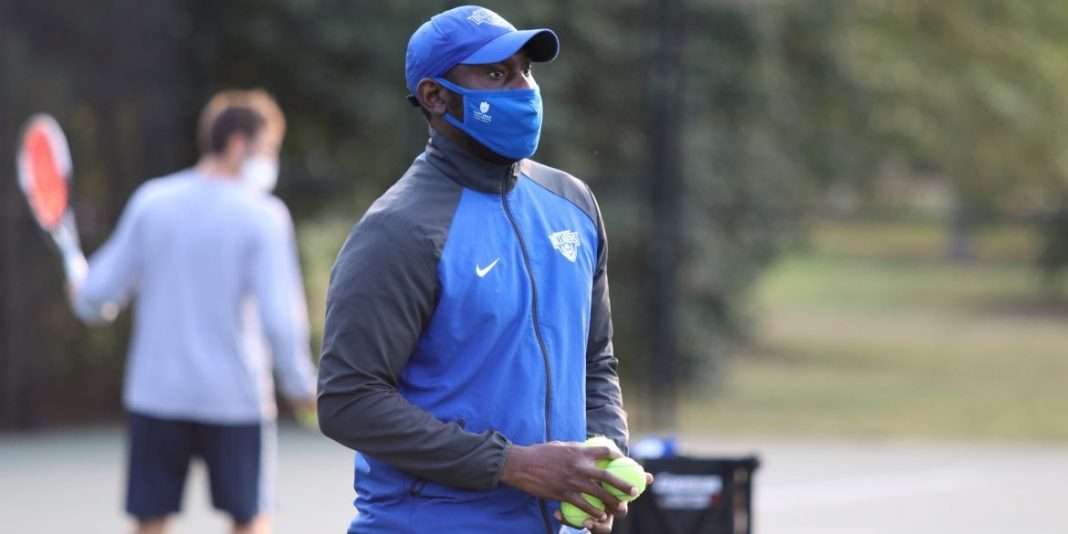 Now entering his 13th year as a college head coach and third season at the helm of the men’s and women’s tennis programs at Saint Louis University, Stuckey is in the midst of doing what he does best — turning a scuffling program into a contender.

“What I love is coming in and instilling a culture that is successful, which wasn’t always maybe there before I got there,” Stuckey said. “That’s a passion of mine — putting in place a culture and a winning atmosphere. With these young people, it obviously goes into those relationships they’ll have for the rest of their lives. They call me. You see pictures of them at each other’s weddings. It does go that deep.”

Stuckey’s head-coaching journey started at Wittenberg, as the director of athletics specifically sought out Stuckey as the first full-time tennis coach in school history. The Tigers earned a regional ranking all six years of Stuckey’s tenure, and both the men and women had TennisRecruiting.net nationally ranked recruiting classes.

After Wittenberg, Stuckey progressed to McPherson College in Kansas for two years. The Bulldogs hadn’t won a conference championship on the men’s side, which Stuckey changed his first year in charge. Both squads achieved program-best NAIA national rankings.

Stuckey then led NAIA William Woods University (Missouri) for a three-year stint. The men’s tennis program had only existed for one year before Stuckey powered the Owls to a No. 8 ranking in America. The women’s program also improved from No. 12 to No. 3 in the nation. William Woods’ two programs were ranked in the top 10 nationally all three years.

William Woods was Stuckey’s final stop before landing at Saint Louis University. The NCAA Division I Billikens have jumped in the rankings as well. The men’s team went from No. 240 to No. 120, while the women’s squad was 210 and is up to 140. The men’s program recently had a No. 23 nationally ranked recruiting class among mid-majors.

“What I love about coaching — especially for our sport — is it’s worldwide,” Stuckey said. “You’ve got people from different cultures and different parts of the United States coming together for one common goal, which is they want to achieve success and win. But I like the fact that you can help young people. I like to give young people the experience of what it’s like to be in a winning culture and winning environment. It’s an experience they’ll remember for the rest of their life.”

Stuckey has a diverse background himself. He comes from a tennis family with a tennis-loving mother in Regina Stuckey. His younger brother, Jason Stuckey, was one of the top youth players in the United States. The duo trained at two very distinct entities — a Cincinnati-based inner-city program that assists youth in underserved communities in earning college scholarships as well as a country club under top trainer Matt Dektas.

Stuckey graduated from an all-boys high school before having his pick of which college to attend. He selected Johnson C. Smith University, a historically black NCAA Division II college in Charlotte. Stuckey played both No. 1 singles and No. 1 doubles for the Golden Bulls and collected a conference championship.

Stuckey went on to earn a master’s degree in one year from Wright State University and tried to play a bit of pro tennis before settling into the college coaching profession at Wittenberg. Though Stuckey played some roller hockey, volleyball, and basketball growing up, tennis is ultimately the sport that stuck.

“I like the idea that you can help your team win, and it can come down to you taking care of doing your job,” Stuckey said. “When you’re playing in a tournament, it’s just you. It’s on you to figure out what you need to do. It’s like life. You’re depending on yourself. You’ve got to make choices. Do you go left? Do you go right? There’s no one to tag in or sub in for you to finish it out.”

Stuckey said that a service mindset was instilled from his days participating in the Inner City Tennis Project. Stuckey returned to Cincinnati every summer between the ages of 18 and 27 to work with players, many of whom didn’t have enough money for tennis lessons or to enter tournaments. More than 60 participants — including Stuckey — have earned college scholarships since the foundation’s inception in 1986.

Alongside community service, one of Stuckey’s key tenets for himself and his student-athletes is respecting one another. With his tennis players coming from various backgrounds or having different ethnicities, Stuckey said his makeup as an African-American man helps him in cultivating relationships.

As do his wide-ranging life experiences. From inner-city programming to country club clinics. From an all-boys high school to an all-black college. From a no-athletic-scholarship Division III college to a pair of NAIA schools to a Division I institution. Stuckey has already immersed himself with plenty of variety for a rising coach in his 30s.

“Being African-American and being in different situations, it’s the realization to make sure my student-athletes know we’re all people at the end of the day,” Stuckey said. “You never know what’s going on in someone’s life. It’s still important to treat them with that respect.

“When practice starts, maybe someone is having an off day. Instead of just assuming — which you may instinctively do — think for a second this might be going on in this person’s life, so let’s approach it this way. Those are values my players take with them once they leave playing for me. There’s a bigger picture. That’s been a benefit. I have the ability to look at that because of how I grew up.”