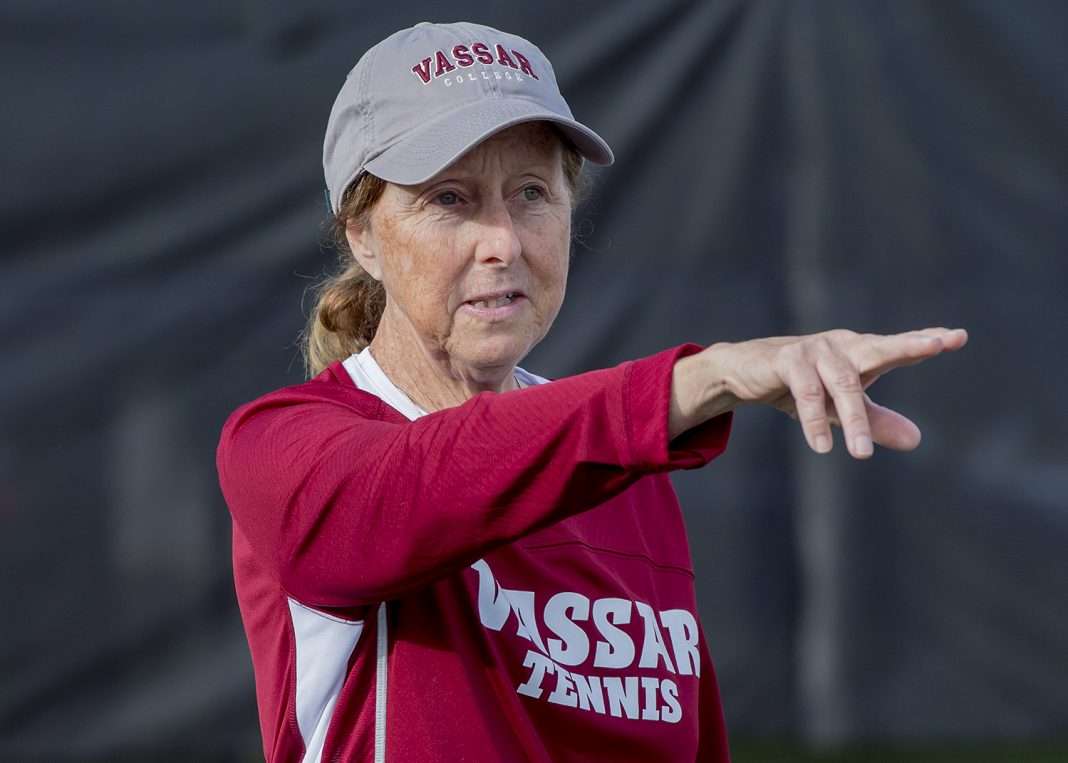 “I’ve been honored to work with extraordinary Vassar students and student-athletes as well as amazing and supportive colleagues,” stated Campbell. “I’m so grateful for the meaningful work that Division III college coaching provides, and I’ve truly enjoyed my rich and varied experiences at Vassar.  It’s not about the wins, it’s about the people and the program. Being able to develop so many lifelong relationships with team members that continue well after their graduation is the most special reward of collegiate coaching.”

Since Campbell took over the Vassar women’s tennis program in 1978, her teams have compiled an astounding overall record of 556-231-1 (.706) and an impressive 58-9 (.865) mark in Liberty League play dating back to the 2005-06 season. Her 556 victories rank third-most all-time in NCAA Division III women’s tennis history, while also ranking fourth amongst all women’s tennis coaches in Divisions I, II, III, and NAIA.

“Focusing on the process rather than the outcome is an approach that has worked well for me and keeps it fun for the team,” noted Campbell. “Winning is an outcome, but the process related to enhancing the student-athlete’s personal, academic, and tennis development is always the main focus for me.  Coaching for today’s practice, not for tomorrow’s championship is a principle that has guided me and kept me passionate about what I do.”

Brewers’ squads have been ranked in the top-15 among the 110 schools in the Intercollegiate Tennis Association Northeast region since 1988 and nationally ranked for over 20 years, including a recent ranking of 27th in Division III at the conclusion of the 2020-21 season. Academically, Vassar squads have earned ITA All-Academic recognition for posting a team GPA of 3.2 and higher every year since 1996, and more than 60 percent of team members have earned ITA Academic All-American honors for earning a 3.5 or above GPA.

Her squads have seen over 80 individuals recognized to All-League teams during her tenure, while also seeing over 100 garner Seven Sisters All-Tournament recognition, and many more named to the All-New York State teams. Six players have been named Liberty League Player of the Year, while five have garnered Rookie of the Year recognition, including the 2021 Rookie of the Year in Sofie Shen ’24. Nine players have been named the department’s Matthew Vassar Outstanding Career Award winners, including 2021 winner, Frances Cornwall ’21.

In addition to multiple regional honors, the Brewers have had nine student-athletes combine for 13 All-America honors during Campbell’s career, include three-time honoree Ava Sadeghi ’15 and two-time honorees Nicole Pontee ’10 and Debbie Sharnak ’07.

Additionally, two of Campbell’s former players were named NCAA Woman of the Year Top 30 honorees with both Pontee and Sharnak garnering the honor. Sharnak is one of two Brewers in history to be a Top 9 finalist for the prestigious award. Sharnak and Sarah Tighe ’03 were also NCAA Postgraduate Scholarship recipients.

“For 42 years, Kathy Campbell has been the face of Vassar Women’s Tennis and the heart and soul of the Department of Athletics and Physical Education,” said Michelle Walsh, Vassar’s Director of Athletics and Physical Education.  “We are all so grateful for her outstanding commitment to her student-athletes, to the department, and to the entire Vassar community.  She has taught us all how to win with grace, how to serve as a role model for others, and how to lead a community of women who aspire to and achieve greatness in all aspects of their lives.  She has had a tremendous impact on so many lives throughout her time at the college and will be deeply missed by all as she embarks on this new chapter of her life.”

Under Campbell’s guidance, the Brewers saw Kate Christensen ’18 win the ITA Northeast Regional Singles title in the fall of 2014, earning All-America honors while advancing to the ITA Small College Championships. Christensen became the first Brewer in school history to win a singles match at the Tournament, finishing fourth overall. She went on to be named the Liberty League Rookie and Player of the Year in the spring of 2015, becoming the first player to receive both honors in the conference since 2006.

Sadeghi – a three-time All-American, twice finished eighth in singles play at the ITA Small College National Championships, placing sixth in doubles in 2012 with partner Samantha Schapiro ’15, who was also an All-American.

Pontee, Hannah Palmer ’92, and Sharnak, reached the singles round of 16 in the NCAA Championships, while both Pontee and Palmer further advanced to the singles quarterfinals. Sharnak and partner Kelly Graham qualified for the ITA Doubles Nationals in 2004. Pontee in 2009 and Sharnak in 2005 were both named the ITA Northeast Region Player to Watch, an honor awarded to just four players nationally.

Numerous players have been ranked both regionally and nationally by the ITA in the past 30 years and qualified for NCAA Championship events.

“Vassar College Women’s Tennis will always be a part of me, and I’ll continue to share the excitement of seeing players develop on and off the court. Moving forward, my vantage point will be from the sidelines rather than on the court. I’m privileged to have coached such remarkable women at Vassar,” stated Campbell. “I’m very proud of their contributions to the College as well as their academic and athletic success and community service endeavors.”

In addition to her tremendous work on the court, Campbell taught numerous classes at Vassar as a highly respected faculty member. She has also served as the Associate Director and co-Chair of Physical Education during her tenure, as well as the Acting Director of Athletics for a period. She has been dedicated to teaching and leading the Vassar Physical Education program forward.

“Along with coaching and teaching, I’ve been privileged to play many formative roles in the Brewer athletic and physical education programs during my tenure,” said Campbell. “I’m proud of that aspect of my work, and its contribution to the College.  Working with Vassar’s dedicated coaching colleagues and inspiring staff has been another highlight of my career.”

Campbell has taught multiple levels of courses ranging from beginning to advanced, her offerings have ranged from swimming, badminton, tennis, and squash. She collaborated on and supported the addition of new Physical Education course offerings and coordinated another new course to be offered next year. She served as the Chair of Physical Education for a number of years, and her leadership, attention to detail, and expertise has been a driving force in maintaining a vibrant program.  Campbell’s commitment to offering courses in Lifetime Sports and maintaining up-to-date offerings is notable.

At the national level within her sport, Campbell served as the chair of the NCAA Division III Women’s Tennis Committee, the ITA National/Regional ranking chair, the ITA Board of Directors, and the ITA Small College Operating Committee.

“I wanted to leave the program in a really good place for the future. The team chemistry is so supportive and positive. We have strength/depth/effective team leaders and an impactful incoming first-year class. Plus, this returning group knows how to win. The program will continue to find success in future years,” said Campbell. “I owe a huge THANKS to our long-time assistant coach, Mark Chace, for his expertise, his caring approach, and unwavering dedication to the program. And to this year’s team, who overcame so many challenges during the pandemic. They continued to raise their games in competition and demonstrated own to play “team tennis” in every sense of the word. For that, I thank you all. GO, BREWERS!”

In honor of Coach Campbell’s incredible 42-year career, a reflection page has been created for folks to submit their favorite memories. Whether you are one of Kathy’s former student-athletes, a former physical education student in one of her classes, the parent of a former player, a spouse of a former player, someone who has worked with Kathy during her career. Or you’re a friend, fan, colleague or even an opposing coach or player. Maybe you met her on the recruiting trail, well, we would love to hear from you! Submissions can be made at the reflection page by clicking HERE. All submissions will be compiled into a special collection for Coach Campbell later this summer.