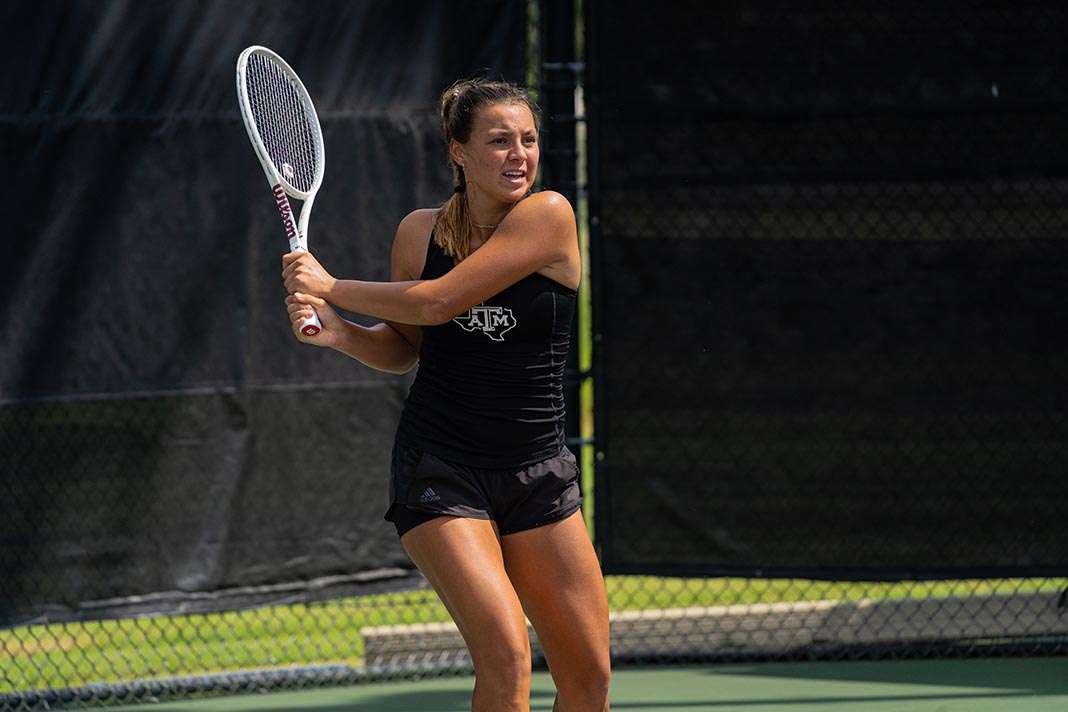 The 2021 ITA Tour: Summer Circuit by Universal Tennis has reached the halfway point. Week Three brought fierce competition at 10 different tournaments across the nation. As always, the events drew competitors from the collegiate ranks, top junior players, and even some former collegiate student-athletes. Players will have three more weeks of competition before the Circuit wraps up — registration is still available for over 30 events!

The Southeastern Conference showed up in full force over the Fourth of July holiday weekend. Student-athletes from the SEC accounted for 26% of the flight one singles winners. They swept the singles titles at three tournaments — Texas A&M, Lifetime Peachtree Corners, and Matrix Racquet Club.

In College Station, rising senior Austin Abbrat and returning senior Tatiana Makarova swept the singles titles for the Aggies. On the men’s side, Abbrat powered through his opponents and won all in straight sets. Up until the finals, Abbrat’s opponents were also collegiate student-athletes. In the finals, he faced Adrian Dibildox — a junior from Mexico. Abbrat posted identical 6-2 sets over Dibildox to win the tournament and his first ITA Tour title. On the women’s side, Makarova battled through a lineup loaded with collegiate players and emerged with barely a scratch on her. She faced South Carolina’s Couch, Ole Miss’ Mize, and A&M’s DiLaura en route to the finals and retired them all in straight sets. In the finals she defeated South African junior Gabriella Broadfoot 6-3, 6-4. This was the second ITA Tour title for the ITA Singles & Doubles All-American.

Just north of College Station, Arkansas rising senior Nicolas Rousset claimed the singles title at the Matrix Racquet Club tournament. Roussett downed his first three opponents in straight sets and only allowed eight games total between them. In the finals, he matched up with Callum Gale from the University of Tulsa. Gale took the first set, but Rousset dug in and pushed the match to a third set after winning the second-set tiebreak. Rousset won the match 4-6, 7-6 (2), 1-0 (8).

Finally in Georgia at the Lifetime Peachtree Corners tournament, Benjamin Ambrosio of LSU and Yu Chen of Auburn took home ITA Tour titles. Playing in his first ITA Tour event, Ambrosio started strong and blanked his first opponent. It was smooth sailing until the finals where he met Presbyterian’s Maxwell Benson. The pair split the first two sets – both lopsided. In the third-set tiebreak, Ambrosio and Benson battled back and forth, but eventually Ambrosio was able to pull ahead and win 3-6, 6-1, 1-0 (11). On the women’s side, Chen captured her first ITA Tour title after downing Vanderbilt’s Marcella Cruz in the finals. In the three-set match, Cruz took the first set, but Chen was able to get back into the match and win in the third-set tiebreak.

Bushamuka advanced to the semifinals of the tournament with relative ease. In the semifinals he faced Ekansh Kumar of the JTCC. Kumar started strong and took the first set from Bushamuka, but the former Wildcat answered and pushed the match to a third-set tiebreak. Bushamuka edged out Kumar in a tight tiebreaker to advance to the finals. There he met Columbia’s Henry Ruger. Bushamuka took the first set easily and fought off a late attempt from Ruger in the second to win the tournament.

D3 Men Holding Their Own

At the Barnes Tennis Center tournament, Bilicic won his first ITA Tour title. Bilicic battled through two three-setters to reach the finals where he faced Micah Erwin of American River College. In the finals, Bilicic took care of business. He posted two 6-4 sets to seal the win and the title.

In Michigan, Case Western rising sophomore Dayal secured a victory. He defeated Toledo’s Vlad Meluta in a three-set brawl. Dayal started strong against Meluta and took the first set, but narrowly dropped the second set in the tiebreaker. Ultimately, Dayal edged past Meluta in the third to win the title.

UTR ITA Player of the Week Finds Success on the Circuit

University of Delaware No. 1 singles player Eliza Askarova is constantly working on her game. The UTR ITA Player of the Week won her first ITA Tour title at the Centercourt Club & Sports tournament this past weekend. Askarova had a competitive path to the championship — three of her five matches were decided in the third set and four of the five featured a tiebreak. This past weekend Askarova added three victories over collegiate players to her resume. In the finals, Askarova matched up against five star recruit Pearlie Zhang. Askarova took the first set, but was unable to put Zhang away in the second. She regained control in the tiebreak and clinched the title 6-4, 2-6, 1-0 (7).

Check out the rest of the results from Week Three of the ITA Tour: Summer Circuit