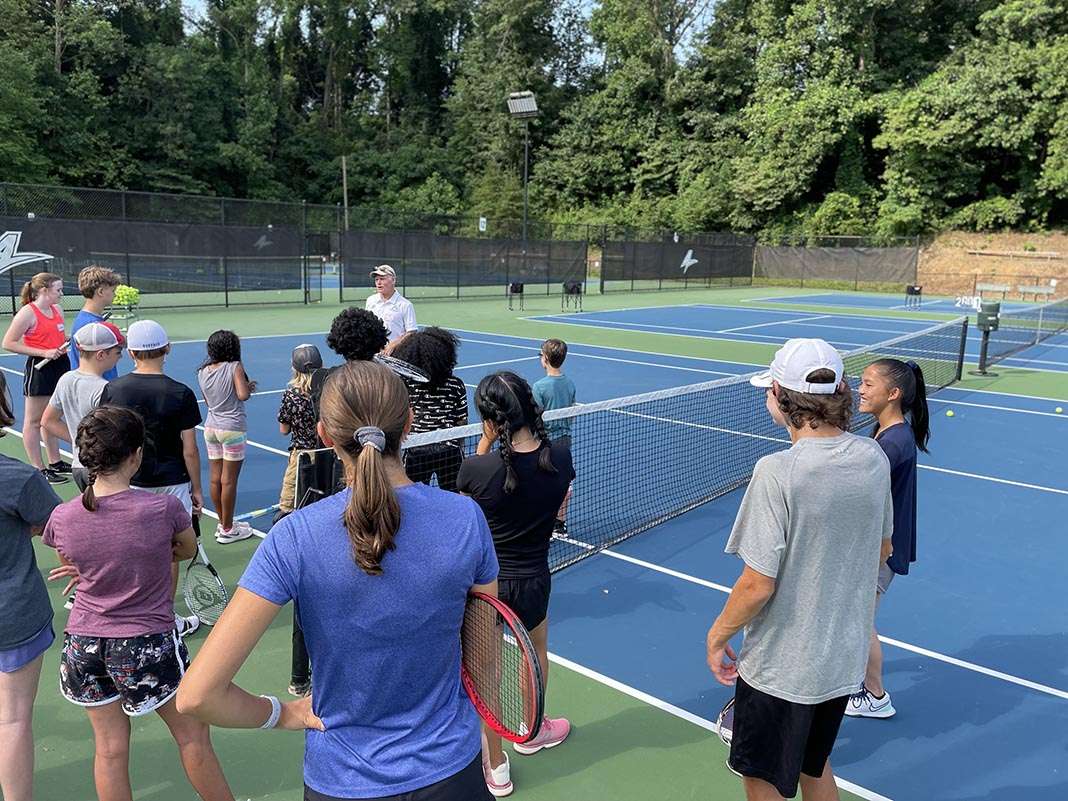 In late June, the UNC Asheville tennis programs partnered with the Asheville Tennis Association (ATA) and the Asheville Racquet Club to put on the first of, hopefully, many Champions Junior Tennis Camps presented by HomeTrust Bank. For UNC Asheville women’s tennis head coach Lise Gregory, the camps represented much more than just a sports camp or a way to occupy kids in the summer. They are an equalizer, an opportunity, a pathway.

The camps targeted underserved youth in the Asheville area — particularly those ages 11 to 15. The organizations hosted two one-week-long camps during the last two weeks of June. Each week, 40 kids were welcomed by Gregory, Men’s Tennis Coach Tom Hand, Bulldog tennis student-athletes, and other volunteers.

Not only did the participants learn the fundamentals of the game from Gregory and Hand, but they also received a tennis racquet, can of balls, t-shirt, and lunch each day. All of which was made possible by the donors who sponsored each camper.

Over the course of the week, Gregory and Hand watched the campers progress from reluctant and skeptical about tennis to excited and passionate about the game.

Through the drills and games, it became clear that several campers possessed the skills to continue on with the sport and perhaps have a future in it. That’s where the ATA stepped in. The association worked with the campers to find times for them to join the ATA’s current programming.

The kids, however, were not the only ones inspired by the sport.

One of the counselors who brought kids to the camp joined in on the drills and fell in love with tennis. At the end of the week, the camp sent her away with a bunch of balls, racquets, and the desire to start a youth tennis program of her own.

With the inaugural year of the camps behind them, the group plans to bring the Champions Junior Tennis Camps back next summer.

“This is the sort of thing that we are hoping to build on year after year,” Hand explained. “If you sponsor a kid this first year and you see the effect that has and he’s back again next year or she’s back again next year and you say ‘Alright, sign me up for three more!’ That’s the idea behind this. This is step one in what we hope will be an ongoing thing. Who knows where it will end up?!”

Whether it be a counselor starting her own program or campers finding a new passion, these small ripples can create sizable change. Together, UNC Asheville tennis, ATA, and the Asheville Racquet Club are working to increase the awareness and relevancy of the sport – even at the introductory level.

For those interested in helping with future Champions Junior Tennis Camps or for more information, contact Lise Gregory or Tom Hand.

A Passion to Make This World a Better Place