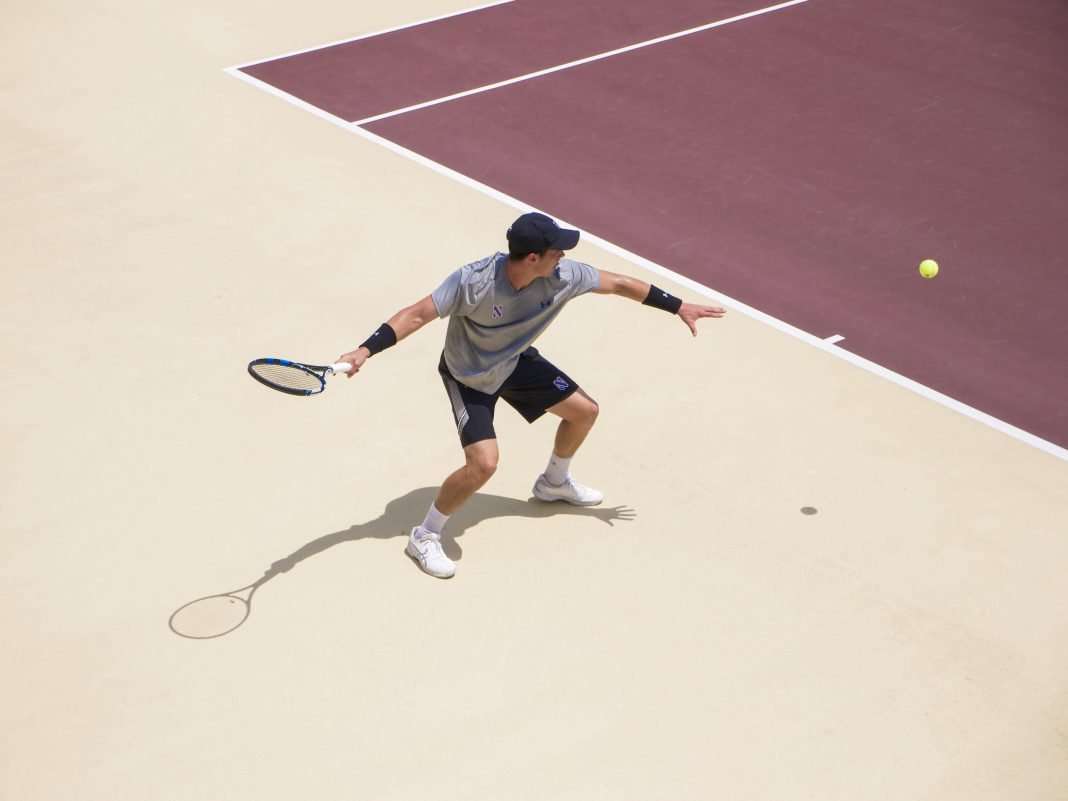 Day two of the 2021 ITA National Summer Championships brought hot temperatures and even hotter competition. Half of the men’s and women’s top eight seeds were eliminated from competition during the Round of 32 and Round of 16. Play will resume tomorrow with the singles quarterfinals and semifinals and the doubles semifinals.

Here are the takeaways from the Round of 32 and Round of 16 in main draw action – a continuation from the top-seeded men & women preview from Friday:

In the Round of 32, LSU’s Ena Babic eliminated top-seed Petra Hule from the tournament. Babic started the match strong with a 6-2 first set and held off Hule’s attempted comeback with a 6-4 second set. Babic’s celebration did not last long, though. In the Round of 16, Yu Chen came from behind to win in the tiebreak 3-6, 6-1, 1-0 (9). Chen will advance to the quarterfinals and play Catherine Gulihur tomorrow.

Trey Hilderbrand continued onto the Round of 16 after defeating Oliver Johansson in straight sets. The first set was all Hilderbrand with Johansson only notching one game, but the Drake player fought back in the second set. Ultimately, Hilderbrand sealed the victory with a 7-5 set. In his second match of the day, Hilderbrand defeated Patrick Fletchall to secure his spot in the quarterfinals. After edging Fletchall in a first set tiebreak, Hilderbrand took control in the second. He will face Matthew Thomson of Wake Forest tomorrow morning.

Junior Noor Carrington was not ready for Victoria Allen in the first set of their Round of 32 match. Allen blanked Carrington in the first and took the second set 6-4 despite the junior’s attempts to stay in the match. Allen’s road to the title would end in the next round though. Florida’s Carly Briggs defeated Allen in straight sets to advance to the quarterfinals. She will play Katherine Duong tomorrow for a spot in the semifinals.

The first of the men’s top seeded players fell in the Round of 32. Kentucky’s JJ Mercer defeated Connor Thomson in a back-and-forth match. Mercer took the first set, but dropped the second. He regained control in the tiebreak and walked away with the win. In his Round of 16 match with Thomas Brown, Mercer grabbed the first set, but could not maintain his momentum. Brown answered with a 6-3 second set and a dominating 1-0 (2) tiebreak. Brown will match up with Greif in the quarterfinals tomorrow.

Csilla Fodor joined Hule as the second top seed to fall in the Round of 32. Gabriella Broadfoot downed Fodor in commanding fashion winning 6-1, 6-2. In the Round of 16, Broadfoot continued her run to the title. She took the first set easily over Mia Rabinowitz and then clinched the match with a 6-3 second set. Broadfoot will play Furman’s Julia Adams tomorrow in the quarterfinals.

Michigan’s Jacob Bickersteth advanced to the Round of 16 after defeating Maxwell Benson in straight sets. While the match was significantly closer than Bickersteth’s opening round match, he still won 6-3, 6-4. Bickersteth faced Big 10 foe Sebastian Vile of Minnesota in the Round of 16. Battling through the heat, Bickersteth downed Vile 6-4, 6-2. He will play another Big 10 opponent tomorrow in Trice Pickens.

Carolyn Ansari of Auburn advanced to Round of 16 after defeating Marcella Cruz of Vanderbilt. Ansari took the first set 6-3 and then rode her momentum to a strong 6-1 second set. Ansari built up a 3-0 lead in the first set of her Round of 16 match with Taylor Bridges before Bridges was forced to retire. Ansari will play NC State’s Jaeda Daniel in the quarterfinals tomorrow.

Auburn’s Maxwell Giddens played Presley Thieneman close, but ultimately the Wildcat won out in the tiebreak. Giddens took the lead after the first set, but Thieneman roared back to force a tiebreak and take the match. Thieneman still had more in the tank, though – and he needed it for his Round of 16 match with William Gleason. The two battled in the first set and Gleason took it in a tiebreak. After narrowly dropping the first set, Thieneman locked in and forced a tiebreak. He emerged victorious and will face Chopra tomorrow morning.

After a fast start in her match with North Florida’s Annabelle Davis, Jaeda Daniel was pushed to the edge in the tiebreak. Davis responded well to dropping the first set 6-1 and notched a 6-4 set. Ultimately, Daniel won in the tiebreak 1-0 (9). The Round of 16 match between Daniel and Anastasia Astakhova was one of the most competitive of the day. Daniel took the first set 7-5, but Astakhova squeezed out of the second set in a tiebreak. The two went back and forth early in the 10-game tiebreak, but midway Daniel pulled ahead to win the match. She will play Ansari tomorrow in the quarterfinals.

Florida State’s Richard Thongoana continued his run in the National Summer Championships with a Round of 32 win over Henry Cacciatore. After a battle in the first set, Thongoana took control in the second set winning 6-4, 6-2. In the Round of 16, Thongoana had to play a tiebreak for the first time in the tournament. Wake Forest’s Matthew Thomson took the first set, but Thongoana bounced back with a 6-1 set. Thomson clinched the match in the tiebreak knocking out the five-seed. He will face Trey Hilderbrand in the quarterfinals tomorrow.

It was a close one, but Malkia Ngounoue defeated Furman’s Madison Dillon to advance to the Round of 16. Dillon came out swinging in the first set and managed to take the lead heading to the second, but Ngounoue fought back to force a tiebreak. In the tiebreak, Ngounoue just edged out Dillon to win the match. In her Round of 16 match, Ngounoue fell behind Illinois’ Katherine Duong. Duong took the first set 6-2 and built a 3-0 lead in the second before Ngounoue was forced to retire. Duong will move on to play Carly Briggs tomorrow for a spot in the semifinals.

South Carolina’s Jake Beasley moved on to the Round of 16 after defeating Aaron Eliscu in straight sets. In the Round of 16, Beasley faced Trice Pickens of Northwestern. Pickens easily took the first set 6-2 and then built a 3-1 lead before Beasley was forced to retire. Pickens will play Bickersteth tomorrow for a spot in the semifinals.

Through two rounds of play, Catherine Gulihur has only allowed her opponents three games total. She continued her domination against Southwestern’s Nina Mitrofanova in the Round of 32. Mitrofanova got on the board with one game in the first set, but could not do anything else. In her Round of 16 match with Safiya Carrington, Gulihur continued with business as usual. She took the first set 6-1 and then built a 4-2 lead before Carrington was forced to retire. Gulihur will play Yu Chen tomorrow in the quarterfinals.

Keshav Chopra did not give up much in his first two rounds of play. Through the Round of 32, Chopra only allowed his opponents three games total. The Yellowjacket posted identical 6-1 sets over Bennett Turner. In his next match with Henry Lieberman, Chopra built a comfortable lead with a 6-3 first set and a 3-1 scoreline in the second before Lieberman was forced to retire. Tomorrow, Chopra will face Presley Thieneman in the quarterfinals.

After splitting sets with Madeline Atway, Xinyu Cai pulled ahead in the 10-game tiebreak to advance to the Round of 16. Atway is the second-straight Big 10 student-athlete that Cai has defeated during the National Summer Championships. However, Cai’s run to the title would end in the next round. Furman’s Julia Adams ran the match from beginning to end. Adams won 6-1, 6-2 to advance to the quarterfinals. She will meet Gabriella Broadfoot tomorrow.

Having deja vu? Lukas Greif once again posted a dominating 6-2, 6-0 scoreline against his opponent. Greif moved on to the Round of 16 after defeating Charles Putrino III. Finally in the Round of 16 Greif met some opposition. Clemson’s Yizhou Liu would not go down without a fight and forced a tiebreak. Ultimately, Greif came out on top and will play Thomas Brown tomorrow in the quarterfinals.

Check out the rest of the action from Day Two of the National Summer Championships!