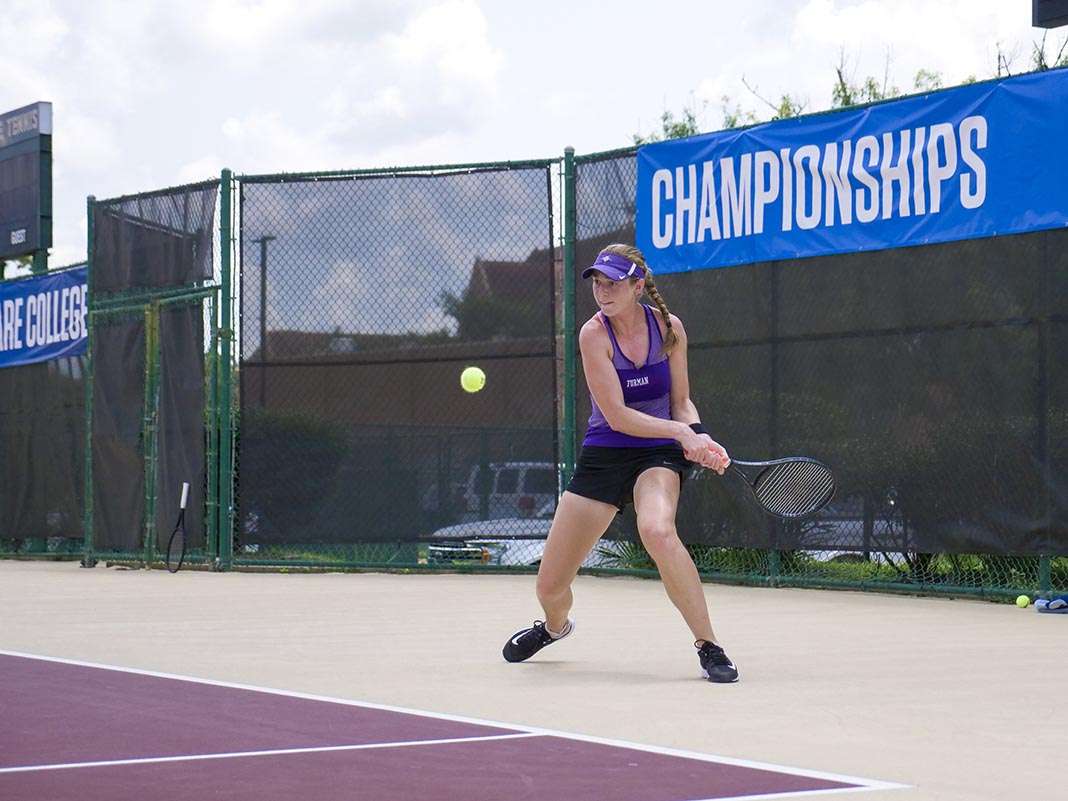 After three intense days of play, the men’s and women’s singles finals in the 2021 ITA National Summer Championships have been set. The players will compete tomorrow at 8:30 am ET at the Scott Speicher Tennis Center for the national titles.

The women’s singles final will be contested between Auburn’s Carolyn Ansari and Furman’s Julia Adams. Ansari and Adams had slightly different journeys to the title match, but both will be in search of the same thing — their first national championship.

Four-seed Ansari cruised through the tournament until the quarterfinals. Through her first three matches she only allowed her opponents five total games. In the quarterfinals, though, Jaeda Daniel gave her everything she had. After Ansari took the first set 6-2, Daniel answered with a 6-2 set of her own. The two student-athletes battled in the tiebreak, but Ansari came out on top 1-0 (11).

For a spot in the finals, Ansari faced Carly Briggs of Florida. The pair last faced each other in April during a duel match between Auburn and Tennessee. The two matches had the same result — Ansari walked away with the win. She powered her way into the finals with a solid straight-set victory.

On the other side of the draw, Adams came into the tournament unseeded. The Furman senior narrowly avoided elimination in the opening round of play with a 6-3, 4-6, 1-0 (6) victory over Peyton Pesavento. After her first match, though, Adams locked in. She won her next three matches in straight sets including a commanding 6-1, 6-2 win in the Round of 16 over eight-seed Xinyu Cai.

In the semifinals, Adams faced seven-seed Catherine Gulihur of North Florida. The two split sets with Adams taking the first 6-3 and Gulihur the second 6-1. In the tiebreak, Adams was able to pull ahead and secure her spot in the finals.

On the men’s side, Michigan’s Jacob Bickersteth and Florida’s Lukas Greif will face each other in the singles final. Both players entered the tournament as top eight seeds — Bickersteth as a three-seed and Greif as an eight-seed. The match will pit Bickersteth’s young talent against Greif’s experience.

So far, Bickersteth has advanced through the tournament will relatively little opposition. He won all of his matches in straight sets and downed the No. 1, 10, and 14 seed along the way. In the semifinals, Bickersteth faced one-seed Trey Hilderbrand. In the midday match, Bickersteth grabbed the first set 6-4 and with it, the momentum. Hilderbrand could not find a way back into the match in the second set and Bickersteth surged ahead to win 6-1.

Florida senior Greif had a smooth start to the tournament winning his opening two matches 6-2, 6-0, but the road got more difficult from there. His Round of 16 and quarterfinals matches each went to a third set tiebreak. In the quarterfinals, Greif fell behind early in his match with Charlotte’s Thomas Brown and dropped his first set, but he responded well and forced the tiebreak. He won out to advance to his match later in the day with Georgia Tech’s Keshav Chopra. There he edged out Chopra in a first-set tiebreak and won the match 7-6 (7), 6-4.

For all four players, a win in the finals tomorrow would be their first ITA national championship.

The women’s doubles final was played Monday afternoon between Abigail Rencheli/Jaeda Daniel and Katherine Duong/Josie Frazier. Rencheli and Daniel took home the title with an 8-1 victory. The men’s doubles final will be played tomorrow at 8:30 am ET between Trey Hilderbrand/Henry Cacciatore and Jared Pratt/Sebastian Vile.