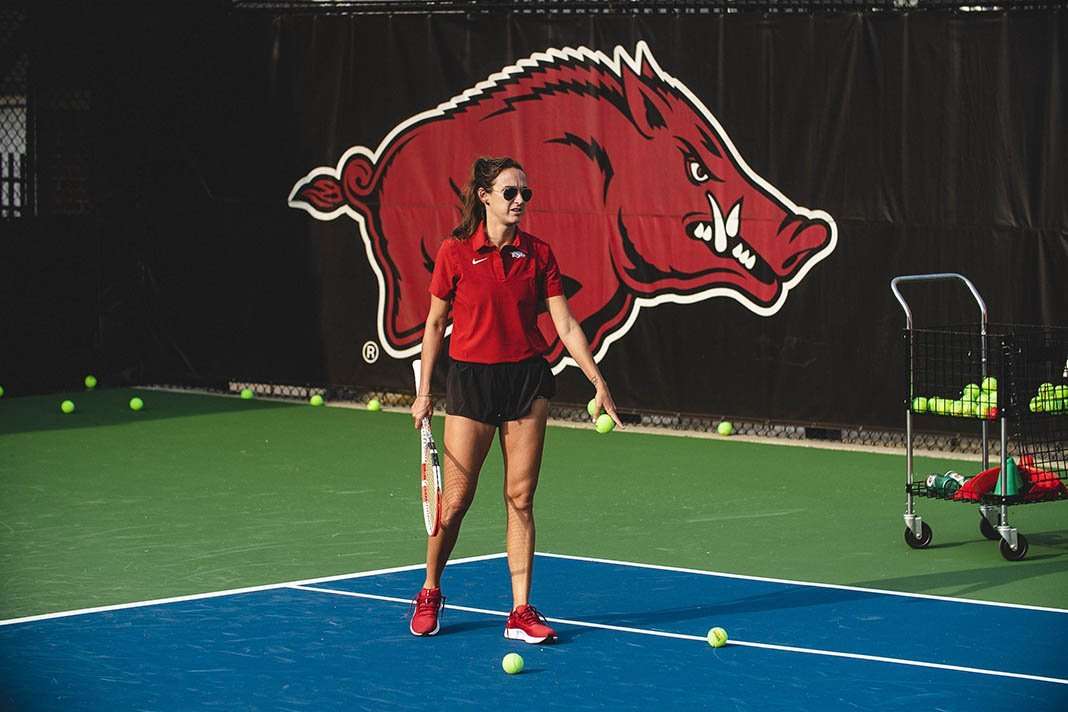 Heading into the 2021-22 tennis season, Cristina Sanchez-Quintanar will be taking on a new role — head coach of the Arkansas women’s program. New experiences are not unusual for Sanchez-Quintanar, though. Since she decided to come to the United States from Spain and play college tennis, she has been embracing new experiences.

In college, Sanchez-Quintanar began her career at the University of Maryland before transferring and finishing her career with the Texas A&M Aggies. At A&M, she had a legendary career which saw her become the only Aggie female student-athlete that competed in the NCAA Championships in three different sports. After college, Sanchez-Quintanar played professionally from 2014-2016. She then joined the UCF women’s program as a coach and helped Coach Koniecko lift the Knights to a top 10 ranking.

Sanchez-Quintanar is just getting started, though. She hopes to help develop student-athletes and fellow coaches into their best selves.

ITA | What are your thoughts on opportunities available for Hispanic athletes in college tennis?

I think, as of today, the opportunities for Hispanic athletes are pretty good. Little by little college tennis is bringing more student-athletes from all over the world, making the sport in this country even stronger. I love how diverse college tennis is becoming year after year.

ITA | Why is Hispanic Heritage Month important to you?

For me is not only about celebrating Hispanic Heritage Month, but to be able to recognize all those people who came to this country to find better opportunities and the fact that this culture gets recognized is a big step for all of us to feel accepted and being able to call this country home.

ITA | How has your Hispanic heritage influenced you in your sport?

In Spain, tennis is one of the biggest sports along with soccer and basketball. Growing up watching all the successful Spanish tennis players, it was super motivational. Indirectly, they played a key role in my motivation to keep improving my level and wanting to make a career out of it.

ITA | What Hispanic tennis players did you look up to while you were playing?

I never had a “favorite one” because I like to watch any kind of tennis style, so I could have a little bit of everything in mine. However, obviously players like Arantxa Sanchez Vicario, Conchita Martinez, Alex Corretja, Juan Carlos Ferrero, Carlos Moya, etc. All those players were at the top when I was a kid and I tried to watch all the matches and learn from them.

ITA | What barriers are there for Hispanic coaches looking to get into college coaching?

From my own experience, the biggest barrier is being able to get a VISA and being able to stay and work here. It took me like 10 years in the country to be able to be considered a resident. Obviously, in the mean time I was able to study and work with certain kinds of VISAs, but the feeling of not knowing if in a few months I would had to leave is not comfortable.

Now, I have several friends from other countries that would love to go to the U.S. to do what I do and as of right now it is almost impossible. Coaches that I know from Spain that would love to work here, either in the pro circuit or in college tennis, and there is not an easy way to just do it. It is a long and complicated process.

ITA | What kind of legacy are you hoping to leave behind as a former Hispanic student-athlete and now as a coach?

I think as a player I already did. After, I think, 4 pretty decent years in college I came back to the pro circuit for a while and I met a lot of young players (a lot of them from Spain) who learned about my story and decided to follow my path and come to college tennis. They just needed an example of someone who did it and had some success. So, I think I did my part there.

Now, as a coach we will see what legacy I can create. I hope I can make an impact in those younger coaches who want to follow the coaching career and show them that it is possible to grow in the field even though we have more obvious barriers.

ITA | How does being a former international student-athlete help you when recruiting?

I think it helps a lot because I can relate a lot with them and share my experiences. Most international players still think that college is not the way to go to became a professional player and one of my goals (and the goal of a lot of other coaches) is being able to show them that it is just a different path of what they grow up knowing and thinking.

ITA | What did it mean to you to be able to play college tennis in America?

When I look back now I am sure that it was the best decision I made in my life. I was one of those kids that refused to think about coming to play college tennis here and after certain circumstances I had to make the decision and I do not regret it at all. I really enjoyed and matured a lot playing college sports and surely it took me where I am today.

ITA | You played three collegiate sports – tennis, soccer, and basketball – how did you balance all three?

I probably have had to explain that like 1000 times, 😊. I guess while I was doing it I was just going and going without thinking too much about it. It helped that the season for the three sports where in different parts of the year. So basically, I almost never had to compete for two of them at the same time. Yes, practices overlapped a lot of times, but I figured out how to manage that. I have always liked to be active and going all the time. So, at that moment I just went for it and, even though it was really challenging at some points, I would do it all over again.

ITA | What were your favorite memories from Texas A&M in each sport?

Best memories were winning. I loved (and I still do) to win. So, if I stop for a second now and I think back I remember those clinch tennis matches, those goals in overtime and the tight basketball games in the arena. The fans over there were pretty good and they made us feel important in any of the facilities. Same kind of atmosphere we have now here in Fayetteville.

ITA | You made the decision to play professionally after college. What was it about tennis that made you choose it?

So, I told you about how I was one of those kids that didn’t want to come to college because I thought that it was not a good path to follow to became professional. Due to certain circumstances, I made the decision to not to follow that path anymore. I was a little burned out of playing tennis. So, as many other kids I came to college to just use my level to keep competing… have fun and get a degree. Little did I know at that moment but, thanks to the support of my friends and my coaches, I found the motivation to love the game again. Putting my head in other things or sports besides tennis helped me big time to start loving the game and I decided to give it a real try again.

ITA | Heading into your first season as a head coach – and of a Power 5 program, no less – what do you hope to accomplish?

What I hope to accomplish is not a sprint, it is a marathon. I was really lucky as a player to be part of two tennis teams that came from a lower level than the one we finished at. I wasn’t part of the coaching stuff at that moment at Maryland or Texas A&M, but I know the effort and professionalism that Howard Joffe and Mark Weaver put in those programs on a daily basis to be able to create a top program. It was a similar situation for me the last 5 years working at UCF with Bryan Koniecko. All the grinding and the hard work that I put in to be able to help him to do what he has accomplished at UCF is difficult to describe. My goal is establishing a culture similar to what I experienced in those successful teams that I was part of in the past years.

ITA | Now living in Arkansas, how do you stay connected to your Spanish culture?

I am always connected with my culture. Facetime, calls, messages with family and friends at home are always happening. I also found a great group of friends/family in this country that happen to be mostly Spaniards that keep me always thinking about my roots.