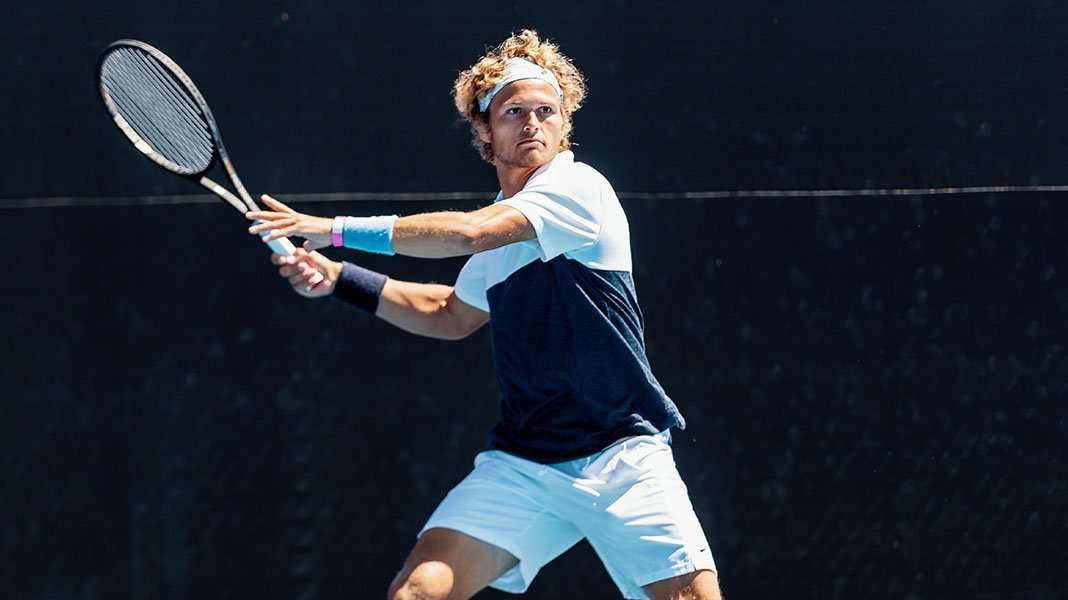 A magical weekend for August Holmgren at the San Diego Open, an ATP 250 tournament, opened his eyes to the possibilities of what’s to come.

The University of San Diego senior, spurred on by a full and energetic crowd at the Barnes Tennis Center (which coincidentally, happens to be the host site for the 2021 ITA National Fall Championships) scored a massive win for himself and college tennis when he topped No. 75-ranked Jordan Thompson 6-4, 7-6 (6) on September 26 in the qualifying draw.

“It was a great win for August, college tennis, and the city of San Diego,” said USD men’s tennis coach Ryan Keckley. “He’s been preparing for this moment since he arrived on campus. August has done everything the right way and he deserves all of the praise he’s receiving.”

A day later back on the courts at Barnes, Holmgren, ranked No. 28 in the ITA Division I Men’s Preseason Rankings, had even more support behind him. No official number was provided, but reports have attendance at over 2,000 spectators and according to sources, ATP officials commented that they had never seen such a large turnout for a qualifying match.

“The atmosphere and support, I loved it,” said Holmgren. “I really like playing in front of people and it felt like they were all cheering for me. I’m sure it must’ve been a different experience being on the other side of it, but it was a really fun experience.”

Fueled by the fans, and confidence gained from the win over Thompson, Holmgren nearly played his way into the main draw. He earned multiple match points but ultimately dropped a hard-fought 6-4, 3-6, 6-7 (7) decision to No. 128-ranked Salvatore Caruso.

“This reaffirms that I’m doing a lot of the right things and shows what I need to continue to develop in my game,” said Holmgren, the 2021 WCC Player of the Year. “I’m close, but still have so far to go. This is something to build off of. I know Ryan has a plan of what I need to keep working on the next few weeks. I’m really excited to get back to work.”

The work for Holmgren has never stopped, but it has evolved. Case in point, over the summer he attended a baseball camp to learn pitching mechanics as it shares similarities to a tennis serving motion. The trip to the camp has yielded positive results as Holmgren has noticed a positive uptick in his service velocity.

“The biomechanics between the two are very similar,” said Holmgren, who represented Denmark this summer in the Davis Cup. “It was evident during my last match that my serve was something that kept me in the match, and it shows how important it is.”

As Holmgren prepares for his senior year of competition at USD he’s setting his sights on improving upon 2021’s run to the Round of 16 at the NCAA National Singles Championship, and helping the Toreros regain the WCC Championship.