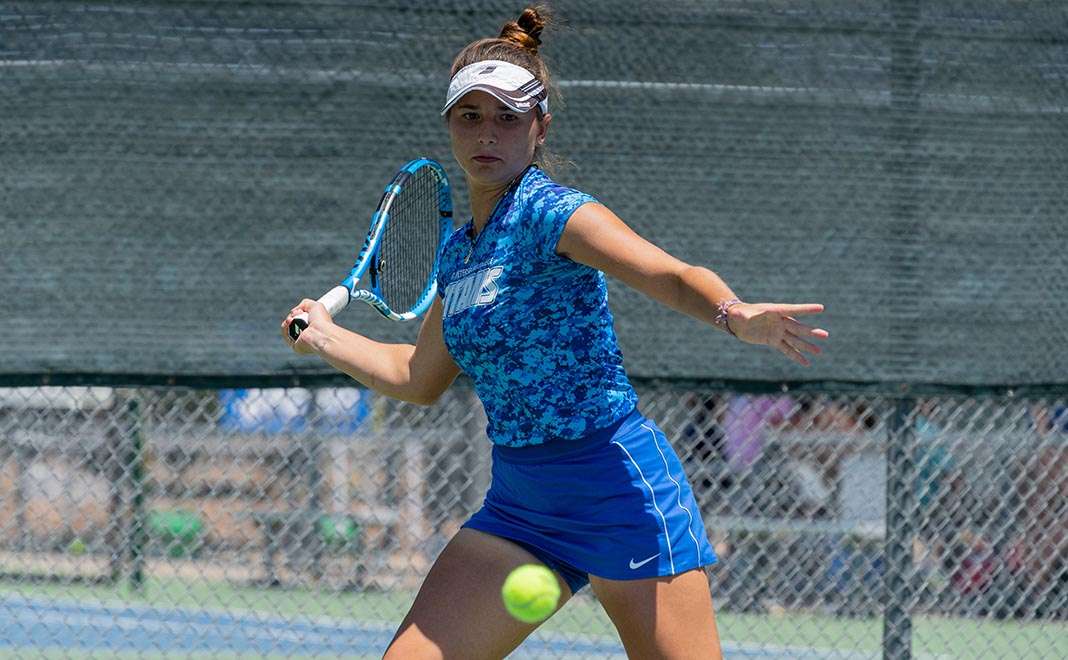 The second week of the ITA Regional Small College Championships is in the books, and it was a good one. Players competed in one of 26 different regional tournaments across the United States to try and earn a spot in the ITA Cup, which will be held from Oct. 14-17 in Rome, Georgia. Winners of each Regional Championship receive an automatic bid into the ITA Cup, while the others have a chance to qualify for an at-large bid.

At the Southeast Regional hosted by the University of South Carolina Sumter, the  2021 ITA Division II Senior Player of the Year, Alvaro Regalado, took home the championship crown, beating out the University of North Georgia’s Joaquin Benoit, who entered the tournament as the No. 7 seed. Regalado, who is a member of the Columbus State University tennis team, came into the event as the top ranked player in the field.

The South Regional title was won by Barry University’s Alejandro Ibanez Gallego, who defeated opponent Denis Golubev of Rollins College in a third set tiebreaker, 10-7. Ibanez Gallego is no stranger to the spotlight, as he was crowned the singles winner of the 2019 ITA Cup for Division II. With the win at the South Regional, he’ll have a chance to claim that title once again in Rome.

History was made at the Midwest Regional as Brennan Cimpeanu of Hillsdale College became the first Charger ever to win the top-flight Regional title. The previous best-ever finish by a Hillsdale Charger was an appearance in the quarterfinals, one Cimpeanu, the No. 6 seed, bested with ease. In the finals, Cimpeanu faced a tough challenge from the No. 3 seed, Nikolaj Talimaa from the University of Indianapolis. While Cimpeanu had already made school history by advancing to the semifinals, he kept his foot on the gas to secure the win over Talimaa in the finals.

The Atlantic Regional was dominated by the Indiana University of Pennsylvania. Crimson Hawks athletes swept the events, and even claimed both finalists spots in the doubles event. Senior Karolin Kirchtag was the champion of the singles event, and showed she was worthy of the crown as she beat No. 1 seed Prinkle Singh of Charleston in the quarterfinals before meeting Lois Page of Slippery Rock in the finals. Kirchtag relied on a gutsy 10-6 tiebreaker set to secure the singles title. Kirchtag also anchored the winning doubles team, as she partnered with Katy Graydon to win the doubles title over teammates Natasha Munday and Joanna Stralka.

There were no surprises in South Carolina as No. 1 seed Luisa Hrda took home the Southeast Regional title in dominating fashion. However, the win was even more special as Hrda was able to make history for Flagler College, by winning the program’s first ITA Southeast Regional championship. Previously, Flagler had placed a singles player in each of the last four championships, yet was unable to win the title in any of them, making the win even sweeter for Hrda and the rest of the Saints program.

At the South Regional held at Florida Southern College, Barry University’s Deniz Khazan of Israel stole the show by blanking opponent Nika Kozar of Nova Southeastern University to win the Regional title. The No. 1 seed Khazan didn’t drop a single set on her way to securing a spot in the ITA Cup.

Maria Garcia, a fifth year senior from St. Mary’s University came out on top of a tough field at the South Central Regional, hosted by Angelo State University. Enroute to the finals, Garcia defeated a tough opponent in Angelo State’s Valentina Gonzalez Ramirez, who entered the tournament as the No. 2 seed. In the finals, Garcia bested Taylor Leslie of Dallas Baptist University, 6-0, 2-6 6-4.

Chase Cohen of Williams College proved to be too much to handle as the junior bested Stan Morris of Middlebury College to earn the singles title and a spot in the ITA Cup. Morris entered the finals guns blazing, having not dropped a single set. However, Cohen outmatched the Panther senior, beating him handily 6-4, 6-0.

The South Regional at Berry College came down to the wire as Jhonny Acosta of North Carolina Wesleyan College squared off against No. 1 seed Jordan Theron of Methodist University for an epic finals matchup. While Theron staggered to the finals, Acosta breezed through his competition without dropping a single set. Acosta kept the momentum rolling as he defeated Theron in straight sets as well.. The win by Acosta ended a dominant reign by Emory College, who had won the singles event 13 of the last 14 years.

The brooms were out in favor of Trinity University at the Southwest Regional as the Tigers swept the singles and doubles events. On the singles side, it was Cameron Krimbill who defeated Hunter Bajoit of Southwestern University to claim his second ever ITA Regional singles title, his previous win coming in 2019. Despite falling in the championship, it was a historic run for Bajoit. He became the first ever Southwestern Pirate to advance to a finals at an ITA Regional Championship. The doubles event was won by Hao Nguyen and Christian Settles, completing the sweep for Trinity.

Carnegie Mellon University claimed its third straight singles title at the Southeast Regional after Crystal Zhou beat Gabi Moss of Washington and Lee University in straight sets, 6-3, 6-3. The singles title is the eighth in program history for the Tartans, and the second ever by a freshman. The Tartans also dominated the doubles event, easily claiming their fourth straight title behind the great play of senior Lindy Cornwall and junior Bin Zheng.

The Central Regional ended in a friendly-fire matchup in the singles championship between University of Chicago teammates Sylwia Mikos and Miranda Yuan. Mikos came in hot, posting four shutouts before dueling with her teammate for the title. Ultimately, Mikos rode the momentum to a 6-2, 6-1 win over her fellow Maroon to clinch a spot in the ITA Cup.

For the first time since 2012, and only the second time in program history, a Grinnell College athlete took home the ITA Midwest Regional title. Junior Pioneer Sabrina Tang improved upon her last ITA Regional appearance, where in 2019 she advanced to the quarterfinals, with a win over No. 2 seed Mary Frances Hose of Carleton College to claim the crown.

At the Northwest Regional, Angel Le of Whitman College won both the singles and doubles events, making it the second year in a row that Whitman College has swept the field. Le bested Cassidy Binder of Pacific, 7-5, 6-1 for the singles title before teaming up with freshman Arianna Castellanos to take home the doubles title.

Jan Silhavy of Lindsey Wilson College claimed the Southeast Regional title after defeating opponent Mattis Le Montagner of the University of the Cumberlands in the finals match. The No. 2 seeded Silhavy nearly blanked Le Montagner, besting him 6-1, 6-0.

The Central West Regional was dominated by the McPherson College Bulldogs, as they swept the competition to take both the doubles and singles crown. In the singles event, teammates were pitted against one another as Thomas Zych lined up opposite No. 1 seed Michael Beltran in an epic Bulldog versus Bulldog battle. Despite Zych only being seeded No. 14, he was able to pull off the upset over his top-seeded teammate to punch his ticket to Rome and claim the singles crown. On the doubles side, Trey Murphy and Daniel Marcano beat the top-seeded doubles team from Bethel College to claim what was McPherson’s eighth straight doubles crown.

Olivet Nazarene University not only hosted the Central East Regional, but also made their presence known as No. 1 seed Francisco Faria made the Tigers proud by winning the singles title over Andrin Zuellig of Cardinal Stritch University. Zuellig entered as the ultimate underdog, coming in  as the No. 14 seed, but ultimately fell short of victory. Faria punched his ticket to Rome with a convincing 6-2, 6-1 win.

Freshman Renee Acena of the College of Saint Mary proved to be too much to handle as she won handily over the University of Ottawa’s Yana Goranova 6-2, 6-2, to win the Central West Regional singles title. Although Acena was the big winner of the day, it was a historic run for Goranova She became the first player in University of Ottawa program history to advance to the regional final.

At the Central East Regional, Ana Zavala and William Woods University swept both events without much trouble. Zavala entered the singles event as the No. 1 seed, and played to that standard throughout, besting Narjis Mzibri from Olivet Nazarene in a third set tiebreaker, 10-5, in the finals. After securing the singles crown, Zavala anchored the doubles team where she and Hanna Lindeboom were able to squeak out a third set tiebreak victory in the finals.

Gaston Cantero entered as the top ranked player and lived up to the hype as he took down his No. 2 seeded teammate,  Cheng En Tsai in the finals of the Southeast Regional 5-7, 6-0, 6-2. Both players are freshman at Abraham Baldwin Agricultural College.

The Central Regional was hosted by Cowley College, and proved to be a Cowley Tiger filled event, through and through. In the finals of the singles event, Cowley teammates Takeshi Taco and Boruch Skierkier fought in a closely contested battle until Taco emerged victorious. After dropping the first set to his Tiger teammate, Taco bounced back to win the final two sets 7-5, 6-2 to secure his spot in the ITA Cup.

At the Southwest Regional, No 1. Seed Diego Dalisay was pitted against his Tyler Junior College teammate No. 3 seed Emilio Vila in the championship match. Dalisay entered the finals having won each of the previous matches in straight sets, and didn’t let up in the finals. Dalisay bested his teammate 7-6(5), 6-2.

The women’s side of the Southeast Regional ended in another win for the Abraham Baldwin Agricultural College, as Jou Chen Chen earned a hard fought victory over Grace Krusling of the University of South Carolina Sumter. After Chen Chen dropped the first set 4-6, she battled back to win the final two in dominating fashion, 6-0, 6-2.

The Central Regional featured a No. 2 over No. 1 seed upset as Justine Lespes of Seward County Community College took down her top ranked opponent, Isid Hernandez of Cowley College. Lespes got off to a hot start, and never skipped a beat dethroning Hernandez by a score of 6-2, 6-1.

Just like the men’s tournament, two players from host school Tyler Junior College battled it out in the finals to claim the singles title at the Southwest Regional. Sophomores Destinee Martins and Lauren Anzalotta, ranked respectively as the No. 1 and No. 2 seeds, put on a clinic as they fought back and forth for the crown. Anzalotta won the first set, but Martins quickly responded by taking the next, 7-5. However, Martins did not have quite enough, as Anzalotta finished her off in the third set (6-3), to grab a spot at the ITA Cup.

The Florida Regional featured a friendly finals matchup as well, as Naomi McKenzie and Valeriia Cherfus of St. Petersburg College squared off. The two freshmen entered as the top two seeds, though only one could emerge as the victor. Although the pair appeared evenly matched on paper, McKenzie didn’t give Cherfus any breathing room at all, handing her a swift 6-3, 6-0 loss.