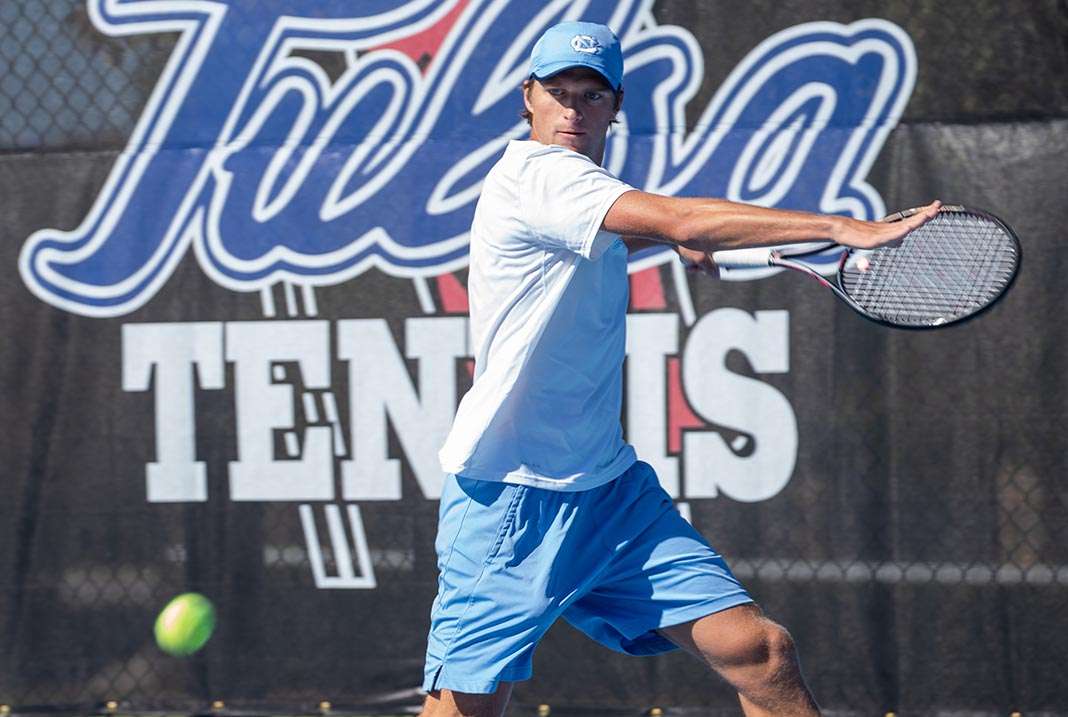 As in past years, the University of Tulsa is serving as the host. All main draw competition will be played at the Michael D. Case Center on the Tulsa campus. Live scoring and live streaming will be available throughout the championship.

The All-American Championship will feature some of the top Division I talent in the country. The singles and doubles draws are loaded, but we rounded up a couple of student-athletes who are looking to make a deep run.

After reaching the finals of the 2021 NCAA Singles Championships, Daniel Rodrigues is poised to solidify himself as one of the top players in Division I tennis. The South Carolina junior comes to the All-American Championships with the highest preseason ranking – No. 3 – out of all the competing student-athletes. Even more, Rodrigues has experience competing in Tulsa for the All-Americans – an asset that is not as common due to the tournament being cancelled in 2020. In 2019, he fell in the opening round of the main draw to Georgia’s Philip Henning.

Earlier this Fall, the Georgia senior played at No. 2 singles for South Africa in the Davis Cup. He won his match in straight sets against Venezuela’s Ricardo Rodriguez. Henning – who is ranked No. 15 in the preseason rankings – will look to improve on his run to the Round of 16 in 2019. Unlike 2019, he will start his journey in the main draw as opposed to the qualifying draw.

The 2021 Men’s All-Americans might be a story of rising stars. One such rising star is Michigan sophomore Jacob Bickersteth. In August, Bickersteth captured the 2021 ITA National Summer Championships Singles title. Over four days, he powered through his competition not dropping a set the entire tournament and downing the No. 1, 8, 10, and 14 seeds along the way. The win in Tallahassee earned Bickersteth a wildcard into the main draw of All-Americans. If Bickersteth is able to lift the All-American trophy, he will become only the second player in Michigan program history to accomplish the feat. The previous winner? Legend MaliVai Washington in 1988.

The two other wildcards into the main draw went to Arkansas’ Alex Reco and Washington’s Clement Chidekh. Razorback senior Reco plays at the top of the lineup for the program. Most recently, he faced off against 2019 NCAA Singles Champion Paul Jubb at the ITF Fayetteville event. Reco put up a hard-fought battle, but eventually fell in the third set. The ITA wildcard was given to Washington sophomore Chidekh. The France native comes to Tulsa as No. 72 in the preseason rankings. He spent his first college tennis season playing at the top of the lineup for the Huskies and compiled a 13-6 record. Chidekh was named the ITA Northwest Region Rookie of the Year. Most recently, he competed in the ATP Challenger events in Cassis and Rennes, France.

Unlike singles, there is one former ITA All-Americans Doubles champion that will be competing in Tulsa this week – Baylor’s Sven Lah. In 2018, Lah partnered with Jimmy Bendeck to bring home the doubles title to Baylor. This year he will seek the title with a new partner – Finn Bass. The pair only started competing together this fall, but were 22-6 (Bass) and 13-10 (Lah) with different partners last season. If Lah is able to lift the trophy once again this year, he will become only the second two-time ITA All-American Doubles champion.

Trey Hilderbrand comes to Tulsa as the most recent ITA doubles national champion. In August, he paired with Nebraska’s Patrick Cacciatore to capture the 2021 ITA National Summer Championships doubles title. For All-Americans, Hilderbrand will partner with Bogdan Pavel. The duo is currently ranked No. 3 in the country in the preseason rankings. In May, they reached the Sweet 16 of NCAAs. Hilderbrand will look to continue to make history for the Knights. At the 2020 National Fall Championships, he became UCF’s first individual national champion. In Tulsa, Hilderbrand and Pavel have the opportunity to become the first ITA All-American Doubles champions in program history.

The following student-athletes qualified for the singles main draw.

The following doubles teams qualified for the main draw.