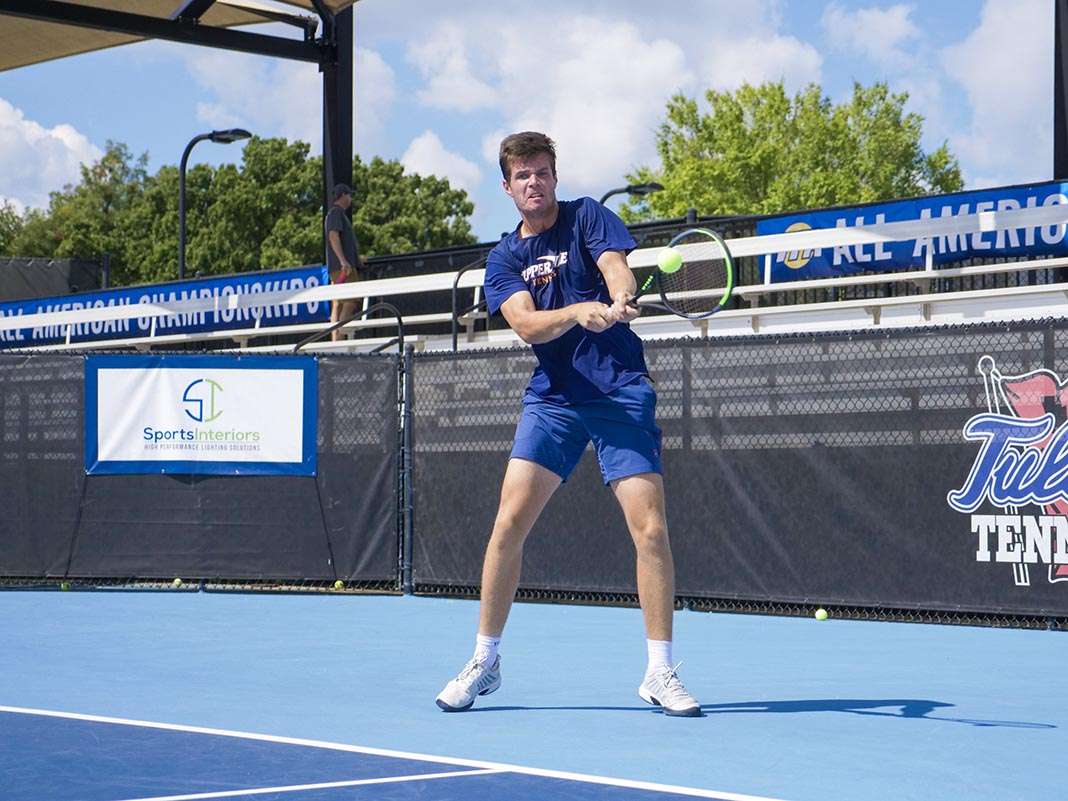 The first day of the 2021 ITA Men’s All-American Championships is in the books. Both the Round of 64 singles and Round of 32 doubles were played at the Michael D. Case Tennis Center. Several top seeds fell and the SEC put together a dominant day.

Play resumes tomorrow morning with the Round of 32 singles and Round of 16 doubles. Live streaming and scoring will be provided for the matches on the Tulsa website.

The SEC came out in full force on the first day of the ITA Men’s All-Americans main draw. Fourteen student-athletes from SEC schools advanced to the Round of 32. Only eight SEC student-athletes lost in singles today and only three of those losses came at the hands of non-SEC athletes. Tulsa’s Kody Pearson, Wake Forest’s Filippo Moroni, and Pepperdine’s Daniel De Jonge each knocked a SEC student-athlete out of the draw.

The Bulldogs rolled today. All three Georgia players advanced to the Round of 32 in singles. Both Philip Henning and Hamish Stewart won their respective matches in straight sets. No. 5 seed Trent Bryde outlasted a rally from Harvard’s Schulenburg to advance 6-1, 2-6, 6-4.

The Gamecocks had two student-athletes advance to the next round. Connor Thomson joined No. 1 seed Daniel Rodrigues in the Round of 32. Thomson held off lucky loser Vito Tonejc in a three-set battle. Earlier in the day Rodrigues powered past Oklahoma State’s Tyler Zink in a straight-set victory.

The highest ranked singles upset of the day came at the hands of Middle Tennessee’s Francisco Rocha. The senior defeated No. 3 seed Luc Fomba in straight sets early Wednesday morning. Rocha edged out Fomba in a first-set tiebreaker 7-6 (4). With the momentum tilting his way, he finished off the No. 8 player in the country with a 6-4 second set. He will face USC’s Stefan Dostanic in the Round of 32 tomorrow.

Tulsa’s Kody Pearson pulled off an upset of No. 7 seed Andres Andrade in the opening round of the main draw. Pearson was one of four student-athletes who upset a seeded player. He started fast against the Florida senior taking his first set 6-2. In the second set, Andrade played Pearson close, but was unable to force a third set. Tomorrow Pearson will face Ohio State’s Cannon Kingsley for a spot in the Round of 16.

Filippo Moroni’s extraordinary run in the 2021 ITA Men’s All-Americans lives on. The Wake Forest sophomore tallied his eighth win of the tournament today with a comeback victory over Auburn’s Tyler Stice. He dropped a close first set to Stice, but gritted out the next two sets to advance. Moroni started his Cinderella run in the All-Americans on Saturday in the pre-qualifying draw. He will look to keep it going tomorrow against Georgia Tech’s Andres Martin.

Lucky losers Richard Ciamarra and Cleeve Harper upset the No. 1 seed in the opening round of doubles play. The Texas team dropped their last match of qualifying to Virginia’s Rodesch/Goetz, but made it into the main draw as a lucky loser. They made the most of the opportunity and came to play. Ciamarra/Harper narrowly took the first set over UCF’s Hilderbrand/Pavel, but gave up the second set. In the tiebreak, they edged out the Knights tandem 10-8. The upset is the highest seeded upset of the entire tournament — singles or doubles.

North Carolina’s veteran duo of Mac Kiger and Brian Cernoch knocked off the No. 3 seeded team of Oscar Cutting and David Stevenson late Wednesday afternoon. The Tar Heel team came out on top of two tight sets to win 7-5, 7-6 (4). They will face Baylor’s duo of Sven Lah and Finn Bass tomorrow.