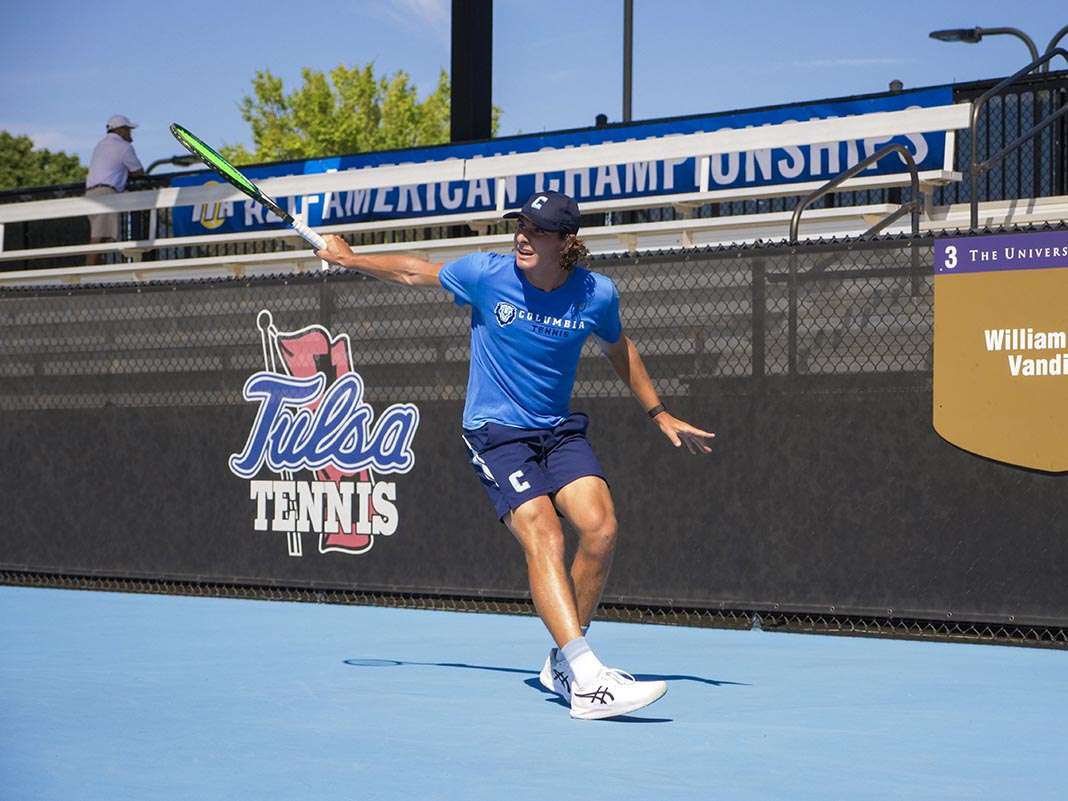 The Round of 32 Singles did not prove to be kind to seeded players. Eight seeded players fell in their singles matches today, including the No. 1 seed Daniel Rodrigues. Only four seeded players remain in the draw, while three qualifiers are still in pursuit of the title.

Play resumes tomorrow morning with the singles Round of 16 and quarterfinals along with the doubles quarterfinals. Live streaming and scoring will be provided for the matches on the Tulsa website.

Shelton Shuts Down No. 1 Seed

So far the Men’s All-Americans have been smooth sailing for Ben Shelton. The Florida sophomore has yet to drop a set and has only allowed 10 games total. He started strong in his Round of 32 matchup with No. 1 seed Daniel Rodrigues. After taking the first set 6-3, Shelton went up two games before Rodrigues was forced to retire. Shelton will face LSU’s Ronnie Hohmann tomorrow for a spot in the quarterfinals.

Andre Ilagan won his second-straight top 30 singles win at the All-Americans today. After defeating No. 26 Marcus McDaniel, the Hawai’i junior powered past TCU grad transfer No. 18 Juan Carlos Aguilar. Aguilar was never able to make a run in the match and fell to Ilagan 6-2, 6-2. Ilagan is only the fourth player in Hawai’i history to compete in the All-Americans and the first to ever win a match – let alone two.

Columbia sophomore Alex Kotzen is not done yet. After outlasting Old Dominion’s Luca Maldoner yesterday, he defeated No. 23 Hamish Stewart of Georgia in straight sets. Kotzen and Stewart went to a tiebreak in the first set and Kotzen emerged victorious. Riding the momentum from the first set, he created some breathing room between him and Stewart and sealed his victory with a 6-3 second set. Tomorrow, Kotzen will look to knock off his second seeded player of the tournament when he matches up against No. 4 seed Finn Reynolds of Ole Miss.

After a successful first day for the South Carolina Gamecocks, the tides turned. Oklahoma’s Mason Beiler rallied in his match against South Carolina’s Connor Thomson to knock out the only remaining Gamecock from the singles draw. Beiler mounted an impressive comeback after falling behind early in the first set and dropping it 6-1. He gritted out a 6-4 second set and finished the match with a 6-1 set of his own. The victory adds a top-20 win to Beiler’s record. Tomorrow he will meet Michigan’s Jacon Bickersteth in the Round of 16.

Lucky losers Richard Ciamarra and Cleeve Harper came close to continuing their run in the doubles draw, but Ohio State’s James Trotter and Justin Boulais edged them out in a third-set tiebreaker. The Buckeyes comfortably took the first set, but the Longhorns were not going to be put away that easily. Ciamarra/Harper surged ahead in the second and evened the match at a set a piece. Despite coming into the tiebreak with the momentum and the energy, the Texas team fell behind early on. The momentum swung back and forth in the tiebreak, but the Buckeyes maintained their lead the entire time. They will face Oregon’s Charleton/Vandecasteele tomorrow in the quarterfinals.

Tennessee’s tandem of Hudd and Mitsui will be playing at least one more match at the Men’s All-Americans. Together they pulled off a dramatic, last second comeback to defeat Ole Miss’ Reynolds and Lithen. The Vols narrowly dropped the first set 7-5, but they dug in and eked out a 7-6 (5) second set. In the tiebreak, the Rebels ran up the score and went ahead 8-2 forcing Hudd and Mitsui to hold off five match points. Tennessee advanced to the quarterfinals after winning 11-9. They will face lucky losers Stewart and Henning of Georgia tomorrow.

Check out the rest of the results from the Men’s All-Americans!