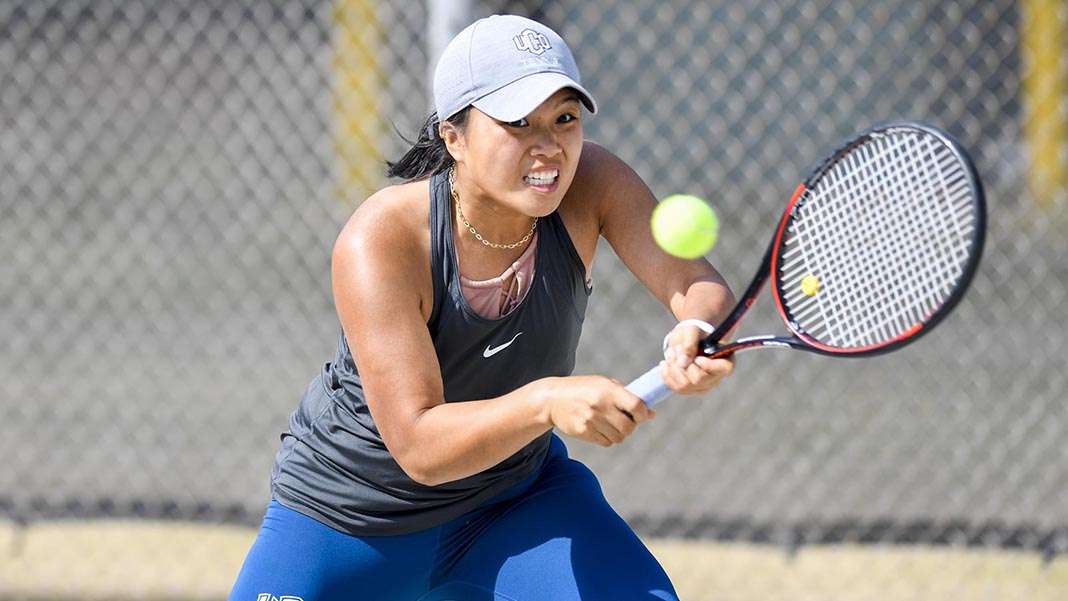 The final week of the ITA Regional Small College Championships has come and gone, wrapping up what was a talent-laden and exciting tournament series. With the Regional Championships in the past, all eyes are towards the future and the ITA Cup in Rome, Georgia.

At the Central Regional, University of Southern Arkansas’ Marko Nikoliuk made his presence known. The junior from Ukraine bested the No. 1 seed Andrea Zamurri of Northwest Missouri State University in the semifinals before defeating Zamurri’s Bearcat teammate Franco Oliva in the finals, 6-3, 7-5.

The South Central Regional title went home with Gonzalo Fernandez Gil of the University of Texas at Tyler as Fernandez won by default over his teammate, Joaquin Bianchi. Bianchi withdrew from the match after making an impressive run to the finals as the No. 11 seed. The UT Tyler teammates paired together in the doubles tournament, but came up short in the finals and fell to the No. 1 ranked team of Alex Martinez Roca and Ben Westwick from Midwestern State University.

At the West Regional, Sebastian Herrera of Biola University proved that seeding isn’t everything. The unseeded Herrera walked away with the singles title and a spot in the ITA Cup. Herrera stunned Point Loma’s Tyler Davis, the No. 1 seed, with a 6-0, 6-1 win, and stayed confident as he rolled to the finals where he defeated Azusa Pacific’s Ryan Nuno, 6-2, 2-6, 10-8.

The Central Regional was dominated by the University of Central Oklahoma, as the singles semifinals featured an all-UCO draw. Mae Canete beat teammate Grace Chadick, while Christine Canete defeated Adel-Byanu Abidullina, which set up an epic finals match between the Canete sisters. Ultimately, it was Mae, the older sister, who got the better of Christine, defeating her sister 6-4, 7-5.

The women’s side of the Western Regional also featured an upset as the No 6. seed Eleonora Liga of Azusa Pacific University was able to knock off No. 1 seed Colbeyshae Emery of Biola University in the finals match, 6-4, 6-1. Emery also flirted with a doubles championship with partner Mary Brascia, but came up just short of a finals win there.

The Southeast Regional was a one-man show, as Thomas Yu of Johns Hopkins University rolled to a championship victory in dominating fashion. Yu punched his ticket to the ITA Cup without dropping a single set, and capped off his impressive run with a 6-1, 6-1 beatdown of the tournament’s No. 2 seed, Moses Hutchinson of the University of Mary Washington to claim the title. Yu and his twin brother, James Yu, made a run in the doubles event, but were ultimately booted in the semifinals by a University of Mary Washington duo of Cole Tecce and Peter Leese.

Case Western Reserve University made quite the run at the Central Regional, sending two athletes to the final where the Spartan teammates were pitted against one another in pursuit of an automatic bid to the ITA Cup. Ultimately, it was junior James Hopper who got the best of his freshman teammate Ansh Shah, beating him handily, 6-2, 6-0, to claim the title and secure a berth in Rome.

Like the Central Regional, the Midwest Regional also featured finalists from the same school. John Zakowski and Cole Lindwall of the University of Wisconsin-Whitewater squared off against one another to decide the winner of the single crown. Despite all efforts from Lindwall, including a first set win, Zakowski proved victorious, defeating his Warhawk teammate 4-6, 6-4, 1-0 (5).

The West Regional also featured a single school final, where Robert Liu of Claremont-Mudd-Scripps separated himself from teammate Ethan Carroll for the singles title, winning 6-4, 7-6. Liu won the hard-fought first set, only to find himself down in the second, where he mounted a gutsy comeback to defeat his fellow Stag.

At the New England Regional, freshman Sahana Raman of Middlebury College saw great success at her first ITA Regional event, besting Jamilah Karah of Bowdoin College in the championship match, 6-2, 7-6 (3). With the win, Raman qualifies for the ITA Cup.

Emory University continued its dominance of the South Regional, where the Eagles won both the singles and doubles championships, completing the clean sweep. On the singles side, freshman Eliza McPherron kept Emory’s regional winning streak alive by defeating North Carolina Wesleyan’s Kristal Dule in straight sets 7-5, 6-2. With the win, Emory has won the last 19 ITA Regional Championships, and Dule is the 6th freshman in program history to do so during that streak. The Eagles continued to pad their stats in the doubles event as well, as duo Alexa Goetz and Xuanjin Li beat teammates Emma Cartledge and Jessica Fatemi to claim Emory’s 14th straight doubles title.

The Southwest regional featured quite the underdog story, as Suzuka Nishino of the University of Texas at Dallas, the No. 14 seed, couldn’t be stopped on her way to singles glory. Nishino didn’t have an easy path to the finals, as she encountered No. 1 seed Nina Mitrofanova of Southwestern in the quarterfinal match. Despite entering as the No. 14 seed, Nishino upset Mitrofanova with a gutsy 6-3, 2-6, 10-6 win to propel her into the finals, where she met Comet teammate and No. 2 seed, Samantha Wong. Nishino was again able to pull off a massive upset, defeating Wong 6-4, 6-3 and earning the singles crown.

At the West Regional, Pomona-Pitzer reigned supreme, winning both the singles and doubles events. In the singles event, Nina Ye and Angie Zhou both advanced to the finals for the Sagehens, but Zhou withdrew from the event, handing the title to Ye. In the doubles event, Zhou and Marissa Markey beat rival duo Crystal Juan and Gabby Lee of Claremont-Mudd-Scripps in straight sets for the championship win.

Although the tournament was finished indoors because of rain, the Gulf Regional wasn’t any less electric as William Carey University teammates Daniil Kilmov and Leo Bressen met in the finals of the singles event, and also breezed through the competition to win the doubles title. With Bressen winning the singles title, and the duo claiming the doubles crown, this marks the first wins in either event in program history for William Carey University.

The Midwest Regional was an all Indiana Wesleyan University affair, as the Wildcats swept both the singles and doubles events. Both championships featured all Wildcat athletes, with Martin Carrizo topping teammate Stefano Di Aloy for the singles title (6-4,6-2), and the duo of Eli Steiner and Mariano Jalif beating teammates Diego Freire and Trey Thixton (6-7(2), 7-5, 10-7) for the doubles crown.

The West Regional featured a thrilling matchup between the tournament’s top seeds. No. 1 seed Chris Papa and the No. 2 seed, Nick Nienhaus, both of San Diego Christian College, battled it out in the finals for regional glory. Both players entered the finals without dropping a set, but it was Nienhaus that got the better of his Hawks teammate, winning the singles title 6-2, 6-3. The two also paired up to claim the doubles title.

The Gulf Regional was dominated by the host school, Xavier University of Louisiana, as a pair of Gold Nuggets met in the title match of the singles event. Kyra Akinnibi entered as the top seed, while teammate Aisha Niyonkuru entered not far behind as the No. 2 seed. The more experienced Akinnibi defeated her freshman teammate in dominating fashion, with a convincing 6-0, 6-1 win.

Not to be outdone by the men, the women of Indiana Wesleyan University also swept the Midwest Regional, winning both the singles and doubles event. In the singles title match, Maddie Bemisderfer defeated Lena Golz, 6-1, 6-2, and then went on to beat Golz again in the doubles title match, where she teamed up with Thewuni Devaraja to take down Golz and Thais Mendez, 6-2, 7-5.

Despite an amazing run to the title match of the West Regional by the unseeded Francesca Aguirre of Westmont College, her efforts ultimately fell short as the No. 2 seeded Angela Rinaldi of San Diego Christian College beat Aguirre to take home the singles crown, 6-2, 6-1.

The Southern Regional featured an upset victory in the finals as the No. 4 seed, Tomas Nader of Jones College upset the No. 1 seed, Julian Parada of Copiah-Lincoln Community College to punch his ticket to the ITA Cup. Nader dropped the first set, but won the second and finished it off with a win in the tiebreak set, 10-5.

* Results from the Northern California Regional will be updated as the information is reported to the ITA.

Meridian Community College newcomer Ana Julissa De Mata Rodriguez entered the Southern Regional as the top seeded player, and showed she was deserving of the No. 1 seeding as she knocked off Tanyaradzwa Kaome in the title match, 6-2, 7-6(5).

* Results from the Northern California Regional will be updated as the information is reported to the ITA.