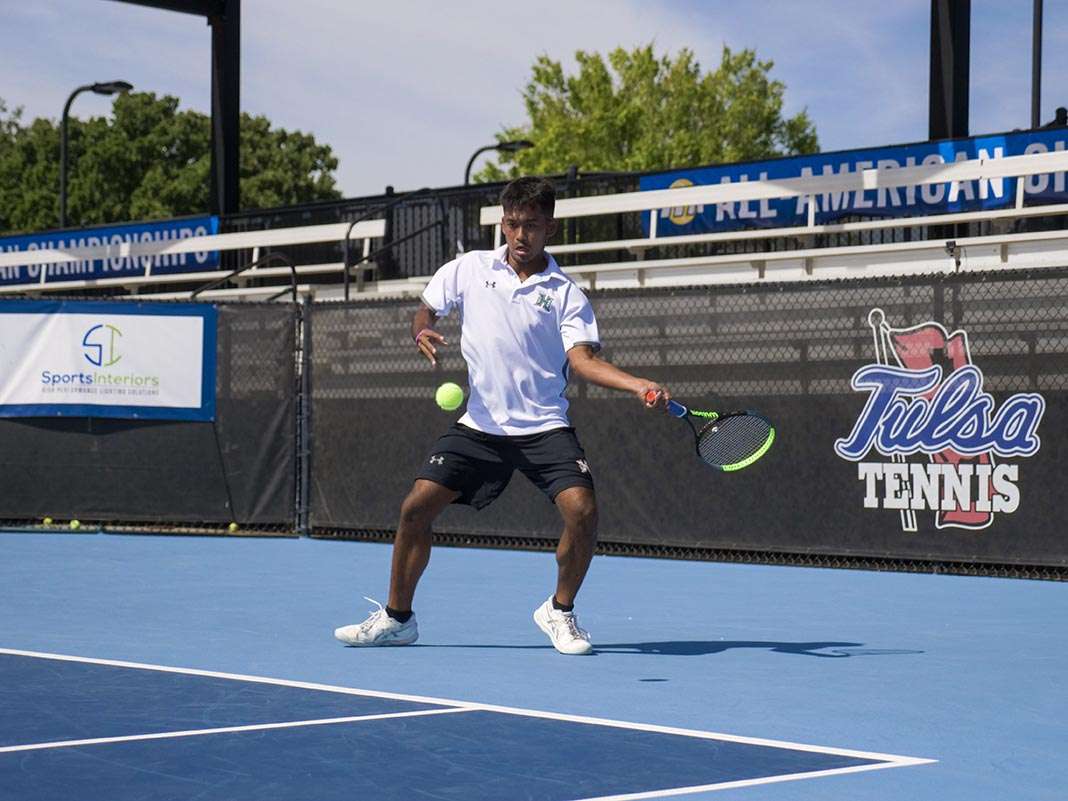 It is one day closer to crowning champions at the ITA All-American Championships. Only four men remain in the singles draw — and they are all unseeded. The same goes for the doubles draw. The remaining student-athletes will face each other for a spot in the finals on Sunday.

Play resumes tomorrow morning with the semifinals for both singles and double. Live streaming and scoring will be provided for the matches on the Tulsa website.

While most of Hawai’i is on island time, Andre Ilagan is focused on game time. His improbable, but steady run through the main draw continued this morning with Ilagan running through the returning Big Ten Athlete of the Year, Cannon Kingsley of Ohio State, 6-4, 6-2. With the schedule calling for two singles matches today, Ilagan then had to return to the court to take on Alex Kotzen of Columbia. After being forced to play from deep in the court in the first set, Ilagan began stepping into the court to take the ball on the rise. The maneuver obviously turned the tide of the match, as Ilagan advanced to the semifinals by a 1-6, 6-1, 6-2 scoreline.

August Holmgren will meet Ilagan in the semifinals tomorrow. The San Diego redshirt senior started his day by downing two-seed Johannus Monday in a comeback three-set victory. Holmgren’s Round of 16 win set him up with a meeting with Oklahoma’s Mason Beiler. Holmgren maintained control throughout the entire match — taking the first set 6-2 and the second 6-4. With a win tomorrow, Holmgren will become the first Torero to make the singles finals of the ITA All-American Championships.

On the other half of the draw, Florida phenom Ben Shelton continued to roll. Shelton has yet to play a third set during the tournament. To start the day, Shelton comfortably defeated LSU’s Ronnie Hohmann 6-3, 6-2. Shelton was the first student-athlete through to the quarterfinals. Brimming with confidence, Shelton took on Ohio State’s JJ Tracy midday. After jumping out to an early lead, Shelton watched Tracy chip away and eventually force a tiebreak. In the second set, Tracy went up 5-4, but Shelton rattled off three straight games to advance.

Tomorrow, Washington’s Clement Chidekh will look to stop Shelton’s run in the All-Americans. The ITA wildcard recipient has powered through his opponents. In the Round of 16, Chidekh rallied after dropping a close first set to USC’s Stefan Dostanic. Boosted by his win earlier in the day, Chidekh started his quarterfinals match with Kentucky’s Gabriel Diallo hot. He raced through the first set 6-1. The Kentucky junior rallied and forced a third set, but was unable to seal the victory. Chidekh is only the third Husky in program history to make the semifinals of the ITA All-Americans.

In doubles, Ohio State’s Boulais and Trotter came from behind to defeat Oregon’s Charlton and Vandecasteele. The Ducks edged out the Buckeyes in the first-set tiebreak, but were unable to grab another set. Boulais and Trotter clinched the match 10-6 in the tiebreak to advance to the semifinals.

The Buckeyes will meet USC’s duo of Dostanic and Frye tomorrow. The Trojans have yet to drop a set during the tournament. In today’s quarterfinal match, Dostanic and Frye ran up the score quickly and took the first set 6-1. Denver’s Davis and Summers came close to forcing a third set, but were unable to close it out in the tiebreak.

Unlike their dramatic Round of 16 match, Tennessee’s Hudd and Mitsui easily advanced past Georgia’s Stewart and Henning. The Vols controlled the energy in the match and snatched a 6-2 first set. With Hudd and Mitsui operating in sync, Georgia could not take the second set and keep their semifinal hopes alive. Hudd and Mitsui are now 8-0 together this fall.

Late in the day, a second Ohio State team advanced to the semifinals. Cash and Vocel got on the board first in the opening set. They tallied two games before Lah and Bass answered with two games of their own. While the set remained close, Cash and Vocel closed it out. In the second set the two teams remained close and the Bears made a late push tying it at four-all, but Cash and Vocel could not be stopped. They will face Hudd and Mitsui tomorrow for a spot in the finals.