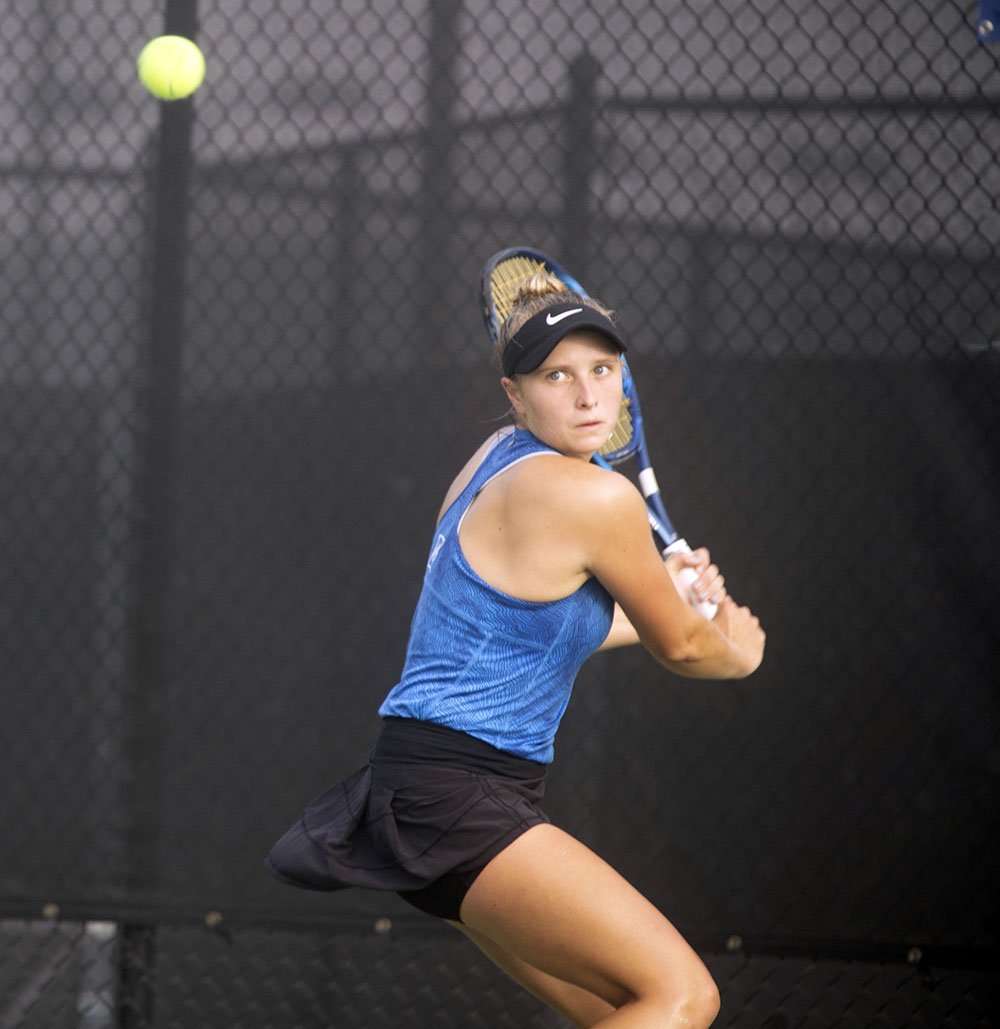 Gratitude is the word that best sums up the first day of play at the 2021 ITA Cup.

Roaming the spacious Rome Tennis Center at Berry College in Rome, Georgia, one quickly got the sense that all of the student-athletes and coaches were grateful to be taking part in this event after COVID-19 turned the 2020 event into an NAIA-only affair.

As the morning fog lifted and temperatures rose into the 80’s, the level of play elevated as well, creating ample opportunities for those in attendance to witness high-level competition across all four divisions represented.

For updated draws and results, check out the ITA Cup tournament page. Courts 11 through 15 have live streaming, courtesy of PlaySight. You can watch those matches here.

The top four seeds in singles all advanced to Friday’s quarterfinals. Barry’s Deniz Khazan is the No. 1 seed. Mae Canete and Adel Abidulina of Central Oklahoma are the No. 2 and 3 seeds. Novikova of Indianapolis is the No. 4 seed.

With 8-player/team draws, the junior college men and women are already through to the semifinal rounds in singles and doubles.

Tyler Junior College has two of the four remaining teams in women’s doubles. The top-seeded team of Lauren Anzalotta and Destinee Martins will take on State College of Florida’s Kia Carvalho-Landell and Carlota Gascon Martinez. Tyler JC is also featured in the second semifinal, as No. 3 seed Violet Apisah and A. Wild face St. Petersburg’s Naomi McKenzie and Valeriia Cherfus, the No. 2-seeded team.

Anzalotta is the No. 1 seed in singles as well, and advanced to the semifinals. She’ll face McKenzie, the No. 4 seed. Seward’s Justine Lepses, the No. 3 seed, and No. 2 seed Martins square off in the other semifinal.

In men’s singles, the top four seeds held firm and moved into the semifinals.

Alvaro Saint Martin and Matt Shearer of Tyler JC scored a win over No. 4 seed Bruno/Hirano of Cowley 4-6, 7-6, 1-0 (7) to move into the men’s doubles semifinals.

In men’s singles, Jhonny Acosta of NC Wesleyan advanced to the semifinals when top-seeded Hooper from Case Western was forced to retire after the second set. The two had split the first two sets.

The other semifinal features No. 3 seed Chase Cohen of Williams and Jordan Theron of Methodist. Theron earned a 6-2, 2-6, 6-0 win over No. 2 seed Cameron Krimbill of Trinity in the opening round.

Sahana Raman of Middlebury, the No. 1 seed in women’s singles, is through to the semifinals. Raman, a freshman, turned back Kristal Dule of NC Wesleyan 4-6, 6-2, 6-2 in the opening round, and topped Mary Hose of Carleton College 7-5, 6-2 in the quarterfinals.

Emory freshman and No. 2 seed Eliza McPherron held down the other end of the bracket. McPherron was extended to three sets in her quarterfinal matchup with Washington & Lee’s Gabi Moss, but prevailed 4-6, 6-1, 6-0.

Facing Raman in the semis Carol Plakk of NYU. McPherson is set to take on Nina Ye of Pomona-Pitzer.

The top four seeds in women’s doubles all won their opening round contests to move into Friday’s quarterfinal round.

Nicole Coopersmith of Keiser, the No. 1 seed, is through to the quarterfinals. She bested Valerie Quinceno of Montreat 6-3, 6-0 on Thursday.

Georgia Gwinnett saw three players, Eva Siska (No. 4 seed), Selina Pichler and Iryna Lysykh all win opening round contests. Teodora Jovic of Union (No. 3 seed) and Stephanie Petit of Montreat (No. 2 seed) also moved on to the quarterfinals.

In women’s doubles, the top four seeds all advanced to the quarterfinals. The same held true for men’s doubles, with all seeded teams winning their opening round contests on Thursday.

Yassir Kilani of Keiser topped No. 3 seed Francisco Faria of Olivet Nazarene 7-5, 7-5 in their men’s singles opening round contest. Kilani’s teammate and No. 1 seed Luke Simkiss also won his match on Thursday to move on.