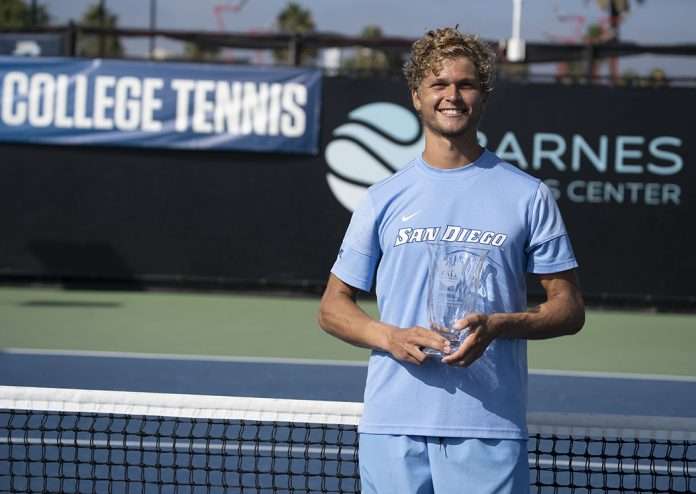 August Holmgren of the University of San Diego is the No. 1-ranked singles player. Holmgren solidified his spot atop the rankings with his victory at the 2021 ITA National Fall Championships. Playing at the Barnes Tennis Center in San Diego, Holmgren was spurred on by an enthusiastic home crowd. He defeated Stanford’s Arthur Fery (No. 7 in the rankings) in a thrilling three-set final.

Holmgren moved up 27 spots in the rankings from his preseason position of No. 28.

The SEC has six (6) players ranked in the Top 25, and the West Coast Conference has four (4) players. The Ivy League, Big Ten and Pac-12 have three players (3) apiece. The ACC and Big 12 each have two (2) players. The American and Big West each have one (1) representative in the Top 25 singles ranking.

Ohio State finished the fall with the nation’s No. 1- and No. 2-ranked doubles team. The duo of Robert Cash and Matej Vocel are No. 1 following a perfect fall. Cash and Vocel won the ITA Men’s All-American Championships and ITA National Fall Championships national titles, and finished with a 14-0 record.

Buckeyes teammates Justin Boulais and James Trotter are ranked No. 2. Boulais and Trotter finished runners-up to Cash and Vocel at the ITA Men’s All-American Championships.