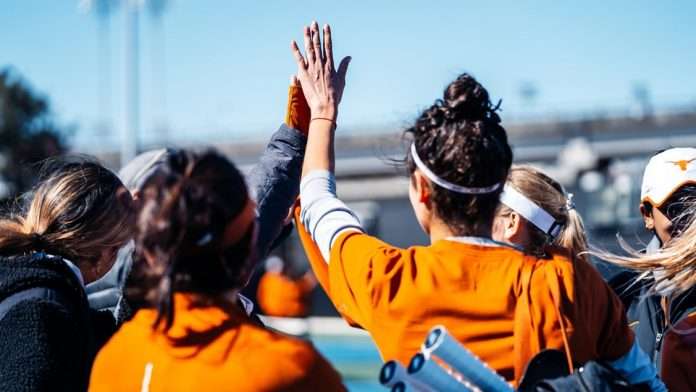 The recently-completed 2022 ITA Kickoff Weekend brought with it some expected shakeups to the Top 25, as the latest ITA Collegiate Tennis Division I Women’s Top 25 Coaches Poll was revealed on February 2.

What hasn’t changed is the very top of the poll. Texas solidified its No. 1 position by sweeping both ITA Kickoff Weekend contests, earning a spot in the 2022 ITA Division I Women’s National Team Indoor Championship in Madison, Wisconsin.

North Carolina and Georgia hosted and won their respective Kickoff Weekend regionals to join the Longhorns in Madison. The Tar Heels remain No. 2 with one first-place vote, and the Bulldogs stay at No. 3.

There are three new entries to the Top 10, with all three teams moving up the poll by virtue of Kickoff Weekend regional victories.

Oklahoma and Texas A&M are tied for eighth; the Sooners topped then-No. 6 Duke (now No. 12) to win the Durham, North Carolina, regional and qualify for Team Indoors. The Aggies bested Texas Tech on their home courts to secure a spot in Madison. USC moved up to No. 10 following a pair of 4-3 victories over Miami and host Baylor in the Waco, Texas, regional.

The ACC leads all conferences with six teams (North Carolina, NC State, Virginia, Duke, Florida State, Miami) ranked in the Top 25. The Big 12 and Pac-12 each have five teams, while the SEC has four teams ranked.

2019 ITA Division I National Female Player of the Year ...